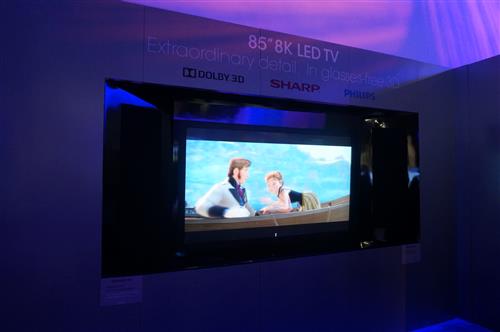 Glases-free is the way forward id 3D is going to survive in the long term. Displays like this, even if prototype, remove many of the problems with 3D but there still needs to be more and better content on offer.

Thought 3D was dead? Well Sharp doesn’t think so with its new 85in LED TV which offers glasses-free 3D viewing. The screen has been developed in partnership with Philips and Dolby and is still a prototype so we can’t say when, or if, it will arrive in shops for you to buy. Nevertheless, here’s what we think from CES 2014.

3D has, for a while now, been fobbed off as a fad and a gimmick which consumers don’t really want. The faff of wearing glasses, having to charge up some of them, having enough for everyone, getting headaches and so on. However, glasses-free, although not a new innovation has made an appearance at this year’s show.

What it does is provide 3D viewing with the minimum amount of hassle and problems. Most TV manufacturers are pushing 4K at the moment but this display used an 8K resolution of 7680 x 4320 which is a whopping 16 times more than a typical Full HD TV. It’s up for debate whether the human eye can appreciate such a high resolution without sitting uncomfortably close to the screen but the glasses-fee 3D is the main feature here.

Sharp is using parallax barrier (aka autostereoscopic) 3D technology to achieve the effect which is able to send a separate image to each of your eyes without the need for a pair of glasses. It’s the same technology with is used in the Nintendo 3DS. The screen shows two images at one while a barrier ensures each eye can only see on.

This does mean you need to be in a precise position for it to work though. Sharp’s impressive display has a total of 10 sweet spots – more than I could fit in my front room. Simply line up the two white lights below the screen to make sure you’re in the right viewing position.

Sharp’s demo reel including sequences from the film Frozen and Life of Pi looked impressive and I was able to watch for a reasonable length of time without any side effects. Though it’s worth noting that I’m fortunate enough to view 3D properly and I, for the most part, enjoy it.

The experience is much more enjoyable without the burden of glasses but there’s still a lack of great 3D content being produced which I believe is one of the reasons consumers aren’t interested in it apart from the odd movie at the cinema.

As we’ve mentioned the TV is a prototype so it may not even hit the production line.