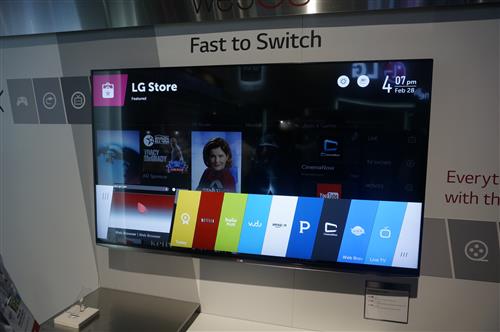 Our first impressions of LG’s new webOS Smart TVs is very good. The firm has done a great job of moulding the operating system to work on a large screen and significantly improve the user experience.

TVs are always a big part of CES and 2014 is no different. There are massive screens with mind boggling resolutions and new operating systems arriving, including LG’s TV running webOS.

Smart TVs have been around for a while but if you’ve any experience of them, you’ll know how slow and clunky they can be. That’s why plug in boxes like Roku’s range and other have been so popular – because they work. TV vendors have not really equipped their sets with powerful enough processor and good enough software to provide a polished user experience.

This year’s CES seems to bring a transition with TVs which is similar to that of mobiles moving from feature phones to smartphones with proper operating systems like iOS and Android. Smart TVs are finally smart.

LG bought webOS from HP back in February 2013. It was used on the Touchpad tablet which was something of a flop, but LG has decided to modify for TVs and stick to Android for its tablets. All of the firm’s 2014 Smart TVs will come with webOS.
The Korean firm says that webOS offers an “intuitive user interface for an experience that is both seamless and refreshingly uncomplicated”. And our first impressions are that this is pretty much bang on.

The interface is colourful, nicely laid out on the screen and most importantly, responsive. The ‘present’ home screen shows you a selection of apps which you can customise – simply click to launch one and while you’re navigating around you can carry on watching TV in the background.

Devices plugged into the TV also count as ‘app’s with the interface handily showing what HDMI port they are plugged into. This certainly simplifies the experience for the use as everything is in one place. Apps like Netflix, Vudu and Pandora can be downloaded from the LG store in the same way you download apps to a smartphone or tablet. All these are shown in the ‘future’ section of the home screen.

‘Past’ shows you recently open apps which you can quickly switch to at the click of a button. Multi-tasking comes to your TV! Instead of flinging apps off the screen to close them like on the TouchPad, you click an x button – simple.

A section called the Live Menu can be opened while watching TV and allows you to quickly search and view recommendations. What’s more, LG says that webOS makes it really easy of developers to make apps for its Smart TVs.

All this is done with a remote that works like a Wii controller. Simply point it at the screen and you get a cursor with which to interact with webOS. It also has a mouse-style scroll wheel making browsing a whole lot easier.