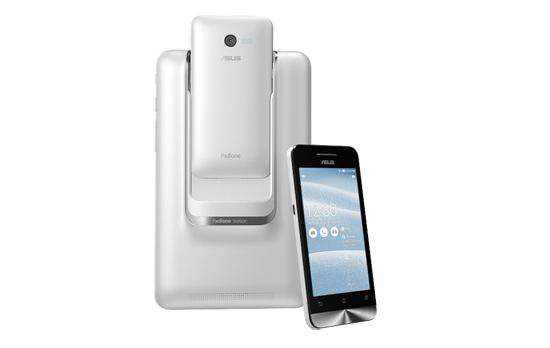 The PadFone mini is actually a great innovation that allows people to purchase a reasonable tablet and smartphone without breaking the bank. We were impressed with the design and feel of the device and the overall functionality of the PadFone mini was surprisingly good too. Weather people want a device that is a tablet and smartphone rolled into one remains to be seen.

The Asus PadFone (not to be confused with the PhonePad) first burst onto the scene in April 2012, the latest mini version has seen some significant spec chances. We got to spend some time with the device at its CES 2014 launch, read our new Asus PadFone mini 2014 hands-on review to find out more.

The Padfone mini is a two-in-one device, that is made up of a 4-inch smartphone, that slots into the back of (and turns into) a 7-inch tablet . The idea behind this is that you can use the specs of one device for all your mobile needs, meaning you scan switch between and big and small display as and when you need to.

Inside the Asus PadFone mini is an Intel Atom Z2560 processor, 8GB of internal storage, microSD slot, 8MP main camera and 2MP front-facing camera, a 4-inch 800 x 480 phone display and a 7-inch 1280 x 800 display for the tablet’s screen. The device also has two batteries, the smartphone’s is 4.5Wh 1170mAh, while the tablet has an internal 8.3Wh 2100mAh battery that can be used to charge the phone on the go.

Apart from feeling great in your hand, the Asus PadFone mini is also quite well off in the performance stakes too. We went through the usual hands-on repertoire of flicking rounds the home screen and opening, closing apps and other general mobile tasks and were satisfied with the way the PadFone mini performed. Don’t get us wrong, it’s no Usain Bolt of the mobile world, but it goes about its business efficiently and won’t leave you wanting to pull your hair out.

In terms of software, there are a couple of key talking points. Firstly, is Asus’s new Google Now-esque feature called What’s Next, that’s designed to make its products better at organising your life for you. We saw this in action in the product demo and it looked impressive at telling you what’s coming up in your day and what you may have forgotten to do, but it’s impossible to comment on what the feature is actually like from just a few minutes with the PadFone mini. The second major feature that Asus chairman Jonney Shih was shouting from the rooftops about was the new PixelMaster’s Low-Light Mode, that inceases “light sensitivity by up to 400%” by automatically altering the pixel count in dark settings to reduce noise.

The new Asus PadFone mini 2014 will cost a reasonable $249 – official UK pricing has yet to be announced.