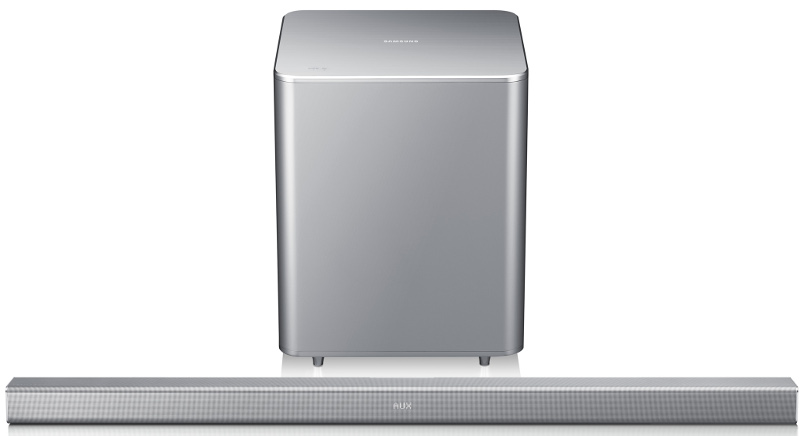 Overall, the HW-F551 is a slick, well-behaved 2.1 option that improves TV audio without causing an undue racket. The glitzy design is a good match for Samsung’s own flatscreen offerings, but could be construed as a tad ostentatious for some living rooms. We’ve no qualms with its performance though. It delivers a wide, crisp soundstage, gets gutsy when it needs to and is extremely easy to live with. Just don’t fixate on the gimmicks. 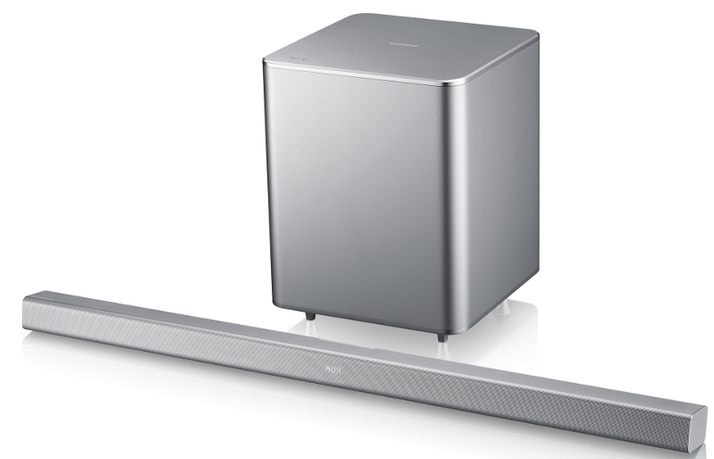 With its silver metallic grille and glossy grey wireless subwoofer, Samsung’s mid-ranking 2.1 soundbar audio system is unashamedly flashy. But we’ll pardon that as it’s also a cracking performer for the cash. See all audio reviews.

Typically selling for £329, the HW-F551 sits just beneath the brand’s range-topping HW-F751. It may lack the stylised vacuum tubes which distinguish that particular model but it offers better cosmetics than Samsung’s entry level offerings, and for what it’s worth, many of its competitors. Rather elegantly, there’s an LED status display that scrolls from behind the grille. Given how obtuse so many soundbars are, such informational clarity is much appreciated. See all speaker reviews.

At 943mm wide, the HW-F551 is best partnered with flatscreen TVs between 46-55-inches. Connectivity is good: there’s an HDMI loop-through with ARC (Audio Return Channel), in addition to an optical digital audio input, stereo minijack and rear-mounted USB reader. Bluetooth streaming is available, not just between ‘bar and mobile device, but also as a wireless bridge to the TV. Dubbed SoundShare, this is an intriguing alternative to using a wired HDMI connection. However, there’s no support for higher-quality aptX with either link. Partnering the soundbar with a Bluetooth mobile is a quick painless experience, and we didn’t experience any dropouts. While the Bluetooth TV link is cute, it’s no real replacement for the reliability of a hard-wired HDMI connection.

A rather stubby little IR remote is also supplied, but this works perfectly well.

Setup is straightforward. There’s no auto calibration routine, as found on the F751, so it’s simply a matter of plug and play. The subwoofer connects automatically when required, and goes into standby when the soundbar is switched off. 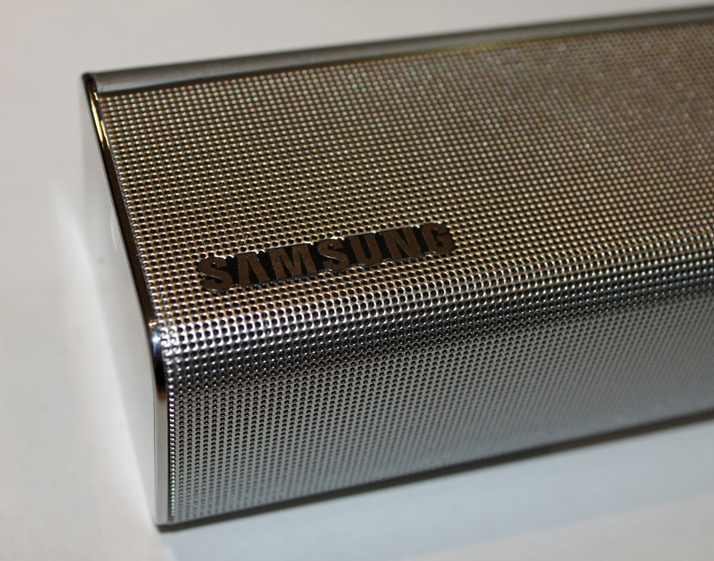 Overall performance is impressive. The wireless sub is well integrated, offering rich bass that complements rather than overwhelms the soundbar’s upper range. The sub is best positioned quite close to the main enclosure, as it handles most of the work up to 200Hz, at which point it delegates to the soundbar.

Samsung quotes a total output power of 310w for the system (150w assigned to the sub), and while that should be taken with a pinch of salt, there’s no doubting the clout on tap. The HW-F551 can slam out the action sequences with the best of them, offering a pleasingly deep and tight bass response. When the Expendables roll into town at the start of their sequel, there’s thumping heft to the onscreen action.

During a particularly thunderous sequence from The Hunger Games, Katniss Everdeen persuaded the soundbar to sup a peak of 33w from the mains, while the thirsty subwoofer gulped down upwards of 78w. In the average UK living room, this translates as being pretty darn loud. But the HW-F551 is also rather refined when it comes to speech, so it’s not a total hooligan.

The rear-mounted USB input isn’t particularly convenient, but file compatibility is broad. MP3, AAC, WAV WMA and FLAC tracks all play. Navigating a stick via simple linear controls isn’t exactly practical though. Rather unusually, the HW-F551 also sports a Dolby Digital decoder which means it won’t mute when hooked up to a Blu-ray player or Sky box set to output a 5.1 bitstream. There’s also a 3D sound processing mode, however, don’t expect anything remotely immersive from it.

The HW-F551 is best considered a stereophonic proposition. While there are a smattering of DSP modes, they don’t contribute anything meaningful. The News mode merely makes TV anchors sound as if they’re reporting via a bad landline, while Cinema and Sports offer incrementally awful levels of reverb. The HW-F551 is unquestionably at its best when heard neat. 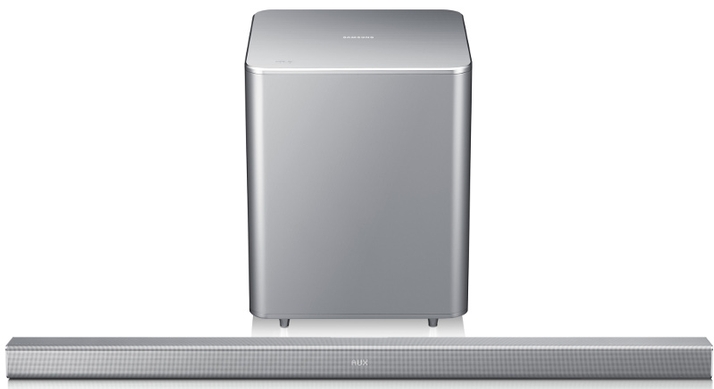