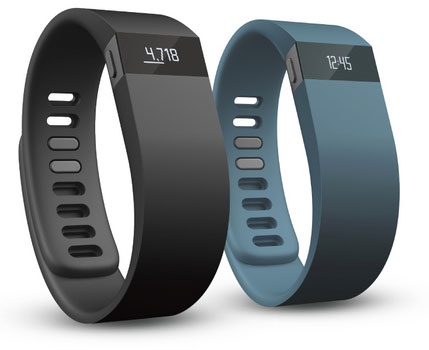 The Fitbit Force is a big, ahem, step up from the Flex, although it’s also somewhat bigger itself. The much-more informative display means you can ditch your watch and inspect your smartphone app less for up-to-date activity data. The altimeter that counts stair steps and longer battery life are also welcome. The Force has better functions than most competing fitness wristbands, such as the new Nike FuelBand SE. Comfortable and light with a great smartphone app and desktop dashboard showing you all your daily, weekly and monthly performance stats the Fitbit Force should make a real difference to you hitting your fitness targets. UPDATE: Fitbit has withdrawn the Force from sale following some users complaining of allergic reactions to the metal in the wristband. While we wait to see whether Fitbit fixes the problem or cancels the Force permanently we recommend the more minimalist Fitbit Flex or the multi-sports Polar Loop as the best wristband, or the Fitbit One for a clip-on tracker.

The Force is the latest activity tracker from Fitbit, maker of the similar Flex and One activity monitors. You keep the wristband on all day and night as it monitors not just your physical activity but your ‘sleep efficiency’ too.

The £99.99 Fitbit Force adds in a bunch of the features long desired by users of the (still available) Fitbit Flex fitness wristband – and envied by other trackers such as the Nike FuelBand and Jawbone. Read our hands-on review of the Fitbit Force to find out how all these new fitness and activity-tracking features can help you get fitter and even lose weight – in conjunction with a healthy (ish) diet, of course.

I’ve been a Fitbit Flex user for nearly a year and love how it tracks my daily steps and keeps me motivated with set targets and pitting me against friends with Fitbit activity trackers. See Fitbit Flex review. The newer Force does all this and more.

Now read: Which Fitbit is best for you to buy.

Fitbit has kept UK customers waiting for months since the US release date and indicated “Spring 2014” for UK availability. News that the Force has been removed from sale even in the US because some users reported allergic reactions to the metal in the wristband puts the Force’s future in doubt. Will Fitbit fix the Force to make it less prone to metal allergies, or will it replace it with something complately new? The company has promised a “next-generation tracker” soon.

Who needs a fitness tracker?

The NHS says that the average person walks between 3,000 and 4,000 steps per day, and 1,000 steps is the equivalent of around 10 minutes of brisk walking.

If you’re trying to lose weight, you should aim to burn 600 more calories than you take in through food and drink every day. This is best achieved by a combination of diet and exercise. Fitbit allows you to input your daily calorie intake (via an online Food Database) so you can roughly gauge how much you’re burning off.

The food database used by Fitbit is from the US, however, so is difficult to use for standard UK brands. Just looking at the US food database put an extra few pounds on me.

That said, if you can log your food intake with some degree of accuracy then this is an important part of losing weight – if that’s one of your aims.

Lack of physical exercise is also quoted as a reason for some cancers, especially in women (breast, womb and bowel, for instance), according to recent scientific reports. Activity trackers, such as the Fitbit Force, encourage users to exercise more. That doesn’t mean joining a gym. It starts with simply increasing the amount you walk. The stuff most of us do a little of each day anyway.

Like the Flex the Force is compatible with free apps on both iOS (iPhone and iPad) and Android. Nike’s FuelBand works only with iOS. The Fitbit app works with iPhone 4S, 5, 5c and 5s as well as the 5th-gen iPod touch, iPad 3, 4 and Air and the iPad mini. It works with most of the latest Android phones, including the Samsung Galaxy S3 and S4, LG G2, HTC One, Nexus 4 4, 5 and 7 (2013), plus others. Check Fitbit’s website for f ull device compatibility – it’s all down to whether your mobile device features Bluetooth 4.

The app is simple to use and syncs with the tracker via Bluetooth so you don’t need to physically attach the tracker to you smartphone or tablet. Most such activity trackers now sync wirelessly so Fitbit isn’t alone in offering speedy data downloads.

The data is presented in good-looking graphs and you can see how each day compares to others.

You can also set email alerts with weekly stats, and updates on how you performed against your Fitbit-using friends.

With the Force’s superb new display you don’t need to access the app as much as you did with the Flex but app and dashboard are essential complements to the Force wristband.

Like the Flex the Force you can track steps taken, distance travelled, active minutes, calories burned, and how long and how well you sleep (what’s known as ‘sleep efficiency’).

In addition it now tracks floors climbed, using an altimeter not present in the Flex.

The Force also features a clock and silent alarm, and so can operate just like a watch – as another top feature lacking in the Flex is the Force’s fancy new display that literally knocks the spots off the Flex’s minimal dotty display.

The Flex may have a minimal display but some might prefer its more minimal size. To incorporate that display the Force is 5.2mm wider than the Flex.

You had to tap the Flex’s minimal display to show the percentage of your steps target via flashing dots. It wasn’t difficult to quickly see how you were doing at any time of day but it was only accurate to 20 percent sections of your target. To get the actual step count you needed to check your mobile app or the desktop dashboard.

The Force shows much more information right there on your wrist on a simple OLED display.

Press the button on the left side of the Force to see the time and click through daily: steps taken; distance travelled; floors climbed; calories burned; and very active minutes. It also shows you Alarm info. It’s possible to rearrange this stats sequence.

Having all the data right there on your wrist is a leap forward from the Flex and miles better than the Jawbone activity wristband that has no display at all.

I guess this makes the Force into Fitbit’s very own smartwatch.

Fitbit Force: How it works

Both the Fitbit Force and Flex trackers use a MEMS 3-axis accelerometer to monitor and understand your motions. It analyses acceleration data to provide detailed information about frequency, duration, intensity, and patterns of movement to determine your steps taken, distance walked or run, calories burned, and sleep quality.

We’re not sure the calorie count is super accurate. We thought it rather generous. But, as with all such trackers, it’s comparative so whether accurate or not you can compare to other days and set yourself meaningful targets.

A feature found on some other fitness wristbands – measuring stair work – is now available on the Force. (It’s missing from the Flex and the Nike FuelBand.)

To count the flights of stairs the Force uses an altimeter that calculates altitude based on atmospheric pressure. The Force registers a floor when it detects continuous motion combined with an elevation gain of about 10 feet.

Walking up and down stairs rather than catching the lift or using the escalator is a great way to both increase your step count and give your heart some much-needed exercise. 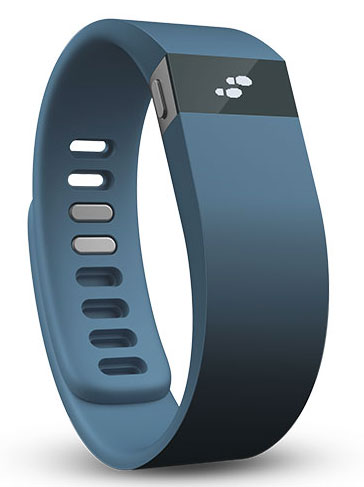 It also contains a cylindrical vibration monitor, which it uses to vibrate when alarms are set to trigger. Again, this is a feature missing from the Nike FuelBand.

The best vibration you’ll feel is that given when you reach your steps target for the day – set at 10,000 as default but one you should raise as you hit target more often than not.

Another activity that’s difficult to verify but is interesting is the Sleep monitor. The motion sensor analyses your movement patterns to determine whether you’re asleep, restless, or awake.

To turn on the sleep-tracking feature you hold down the side button until a timer starts.

That said, I can lay awake pretty still, which the Fitbit measures as asleep. Setting the Force into Sleep mode isn’t as certain as with the Flex – although I’m sure with more experience I’ll get the hang of it. Maybe I was just tired.

The Flex comes with two wristbands – one large, one small. The Fitbit Force comes with just the size you ordered: again, either large or small.

I have rather skinny wrists and the Large one fits fine so Small is maybe for petite ladies or children. It really is quite small.

Putting the wristband on is easy once you get the knack. Men with hairy wrists may feel the pinch.

The Fitbit Force weighs hardly anything – probably a little more than the Flex but hardly noticeable.

It’s comfortable and even stylish. It’s not so big to resemble a probation tag, and now not only looks like a slim watch but actually works as one too.

It is noticeably wider than the Flex (19.2mm vs the Flex’s 13.99mm width), however, and this takes a little getting used to. Of course if it means you can ditch your watch this makes up for the extra bulk.

The wristband is made of flexible, durable elastomer material like that used in many sports watches. There’s also a “surgical-grade” stainless steel clasp (which also contains nickel, in case you’re allergic) used to fasten the wristband.

The Force is water resistant and rain/splash- and (luckily for a fitness band) sweat-proof. Unlike the Flex, which can be worn when swimming) but as with the Nike FuelBand the Fitbit Force shouldn’t be worn while swimming or showering. Fitbit even recommends you take it of when washing the dishes. This is because the connect for the charge is open access from behind the display, while the Flex tracker’s charge connect was protected within the wristband itself.

Fitbit says that on a full charge the Force’s battery lasts 7 to 10 days, about the same as the Nike FuelBand – the Flex, however, gets hungry earlier at about 5 days. We’ll report back when we’ve had the Force on long enough to recharge a few times. When it’s time to recharge the Force shows a low battery, and you can also be notified by mobile device or email.

Charging the Fitbit Force is also different to powering up the Flex.

While you popped the Flex tracker out of the wrist strap and connected it to a charging cable, with the Force you plug the charging cable directly into the tracker, which remains in the wristband.

The charging cable (see photo on next page) is still proprietary so you have to remember to take it away with you on holiday or business trips but you’re less likely to lose either the tracker or the wristband as was possible with the Flex. Fitbit sells spare charging cables for £16.95 but a simpler USB option would have been appreciated – we have enough different types of charger already, thank you very much. 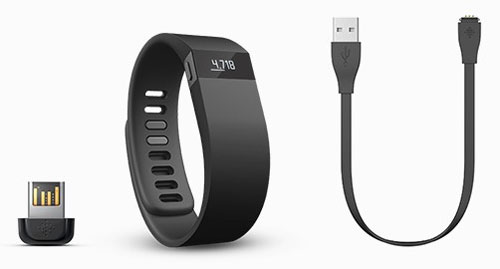