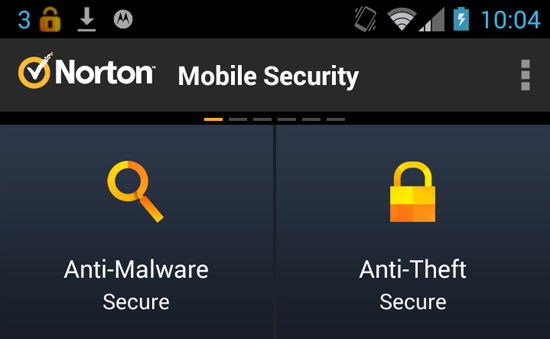 A vast array of security and useful phone management tools, all offered without any charge whatsoever. We’d like its anti-virus to be more proactive and the anti-theft tools are relatively weak, but it’s harder to complain when it’s free.

Norton is one of the biggest names in the security business, and there’s no questioning that it knows what it’s doing when it comes to detecting apps known to be laden with malware: a score of 100% in the AV-TEST labs is proof of that. You might wonder if Norton is actually scanning new apps after you’ve installed the software and there’s no notification that it’s doing so, but you can turn these on in the app’s settings.

Norton is also scanning your web browser for suspicious activity, although we couldn’t do anything to set its alarm bells ringing: downloading a test virus, clicking on links in phishing emails, and clicking on all manner of dubious ads on file-sharing sites didn’t once provoke Norton to step in, unlike other packages on test here.

Norton doesn’t offer as many anti-theft features as Avast and there are some worrying holes in them. The wipe-device setting – which like all of Norton’s premium anti-theft features, can be activated via SMS or through Norton’s web console – is woefully ineffective. It doesn’t perform a factory reset on the device, but merely clears out contacts, files and other personal data. Yet, it still left our Gmail account accessible on the device, as well as all our apps and access to the Play Store, potentially allowing thieves to have a field day.

Locking the device is more effective. The lock feature doesn’t set off any audio alarms, which we think is a more sensible approach that’s less likely to put off a passer-by from picking up a lost handset and handing it in. You can also type a custom message on the lock screen, perhaps offering a reward for the safe return of the phone, which is a nice touch.

Location tracking proved a bit wayward in our tests. With Wi-Fi turned on, it gave our next-door neighbour’s address, which is forgivable, but relying on 3G alone it placed the phone 500m and three streets away, which is of little use. When we tried to use the Sneak Peek feature that takes a snap from the phone’s camera, we received a warning message that this features wasn’t available in our country “due to privacy laws”, yet when we locked the phone, it automatically took some photos using the phone’s camera, which is contradictory.

Call blocking is also rudimentary compared to Avast’s. You can choose to block a particular contact’s calls or text messages, or both, but there’s no scheduling, so you can’t divert work calls to voicemail at weekends, for example. Backup is equally primitive, only backing up the phone’s contacts – a service that’s already baked into Android.