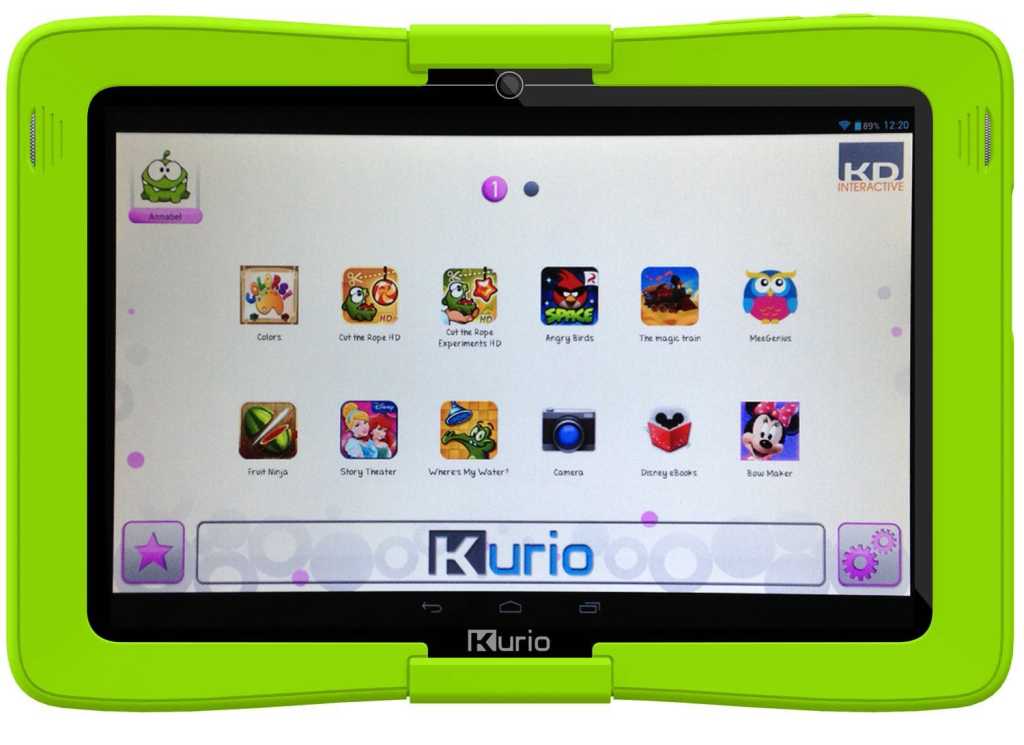 The Kurio 10S has reasonably good child-friendly software and decent parental controls. A year on from our original review, the addition of Google Play and other Google apps is a major bonus and means you’re not limited to the Kurio store. Keeping Wi-Fi turned off improves battery life, and at the current discounted prices, it’s not a bad deal at all.

When I originally reviewed the Kurio 10S, it was expensive  children’s tablet with poor battery life. A year on, if you can still find it for sale, it’s much cheaper and has had some great software updates that make it an altogether better proposition.

The really good news is that the tablet is now Google certified, so you can access Google Play. So, instead of being limited to Kurio’s store, you get Google’s massive selection of games and apps, many of which are free. It also means you get Google’s apps, including YouTube, which many kids want access to these days. Obviously YouTube isn’t suitable for unsupervised use, but it does mean I don’t have to give up my iPad any more.

From long-term testing, I’ve also discovered that the battery lasts a lot longer with Wi-Fi turned off. It makes a huge difference to the standby time, meaning you can leave the 10S on a shelf for a few days and it won’t have run flat.

Although performance is no different, the truth is that I’ve not had a single complaint about it, nor about the mediocre quality of the screen. The bottom line is that if the kids can get the apps they want, they’re happy (they don’t use the web browser as there’s currently no need). And now the Kurio has Google Play, they can have those apps. It also means you can install catch-up TV apps such as BBC iPlayer.

If there’s one sore point, it’s the terrible quality of the built-in cameras, especially for video. One other point to bear in mind is that the Kurio does not have Bluetooth. This is a shame, as it means you can’t use any Bluetooth accessories such as wireless speakers or the latest generation of Bluetooth-controlled today including Sphero.

With all this in mind, and at around £120 now, the 10S is a decent large-screen kids tablet – as long as you don’t need Bluetooth.

Here’s the original review from 2013:

Most Android tablets, including Kurio’s own seven-inch model and the Fuhu Nabi 2, have 7in screens but the new Kurio 10S is one of few tablets aimed at kids to possess a bigger 10in display.

The Kurio 10S shares a similar design with its smaller brother and has a green silicone cover to protect it from knocks and drops.

The new ‘S’ model is all black: a glossy bezel around the screen and a soft-touch black plastic rear panel. Loud stereo speakers are inset on the front, which means audio is surprisingly good. Naturally, there’s a headphone socket as well.

Flanking that are all the other ports and connections, including a potentially useful mini HDMI output and a microSD card slot for adding to the internal 8GB. (Note that there’s only around 2.5GB of free storage out of the box.) You also get front- and rear-facing 2.1Mp cameras.

Build quality isn’t great. It’s similar to budget Android tablets from a couple of years ago. Press the screen too hard or squeeze the tablet from the back and the screen discolours at those points in protest. Fortunately, our six-year-old tester never tapped that hard or tried to twist the tablet, so it wasn’t a major problem.

We criticised the original Kurio 7 for its poor, low resolution screen. The 10S has a better screen with a resolution of 1280×800 pixels. That’s lower than we’d expect these days, but we’d be surprised if any child noticed or complained. The good news is that the screen is an IPS panel so has good viewing angles and it’s also nice and bright.

We found it was usually responsive which was helped by it being capacitive rather than resistive (yes, you still find resistive screens on some kids tablets). This means it doesn’t respond to pressure: the lightest contact is enough to register a tap.

However, this brings us to performance. There may well be a quad-core processor inside, but the 10S was often slow to respond to taps and sluggish at launching apps. Once running apps, things were generally smooth (especially the bundled games – more on those in a minute).

At full price, which is £200, performance is deeply unimpressive. That includes battery life, which Kurio says is only 6 hours of light use. The fact is that playing the bundled games and most other apps isn’t ‘light use’ and will drain the battery in around half that time in our initial testing.

Web browsing is unacceptably slow. Websites would regularly take over 30 seconds to display, and more often than not, embedded videos wouldn’t play at all.

In terms of benchmark results, the Kurio 10S isn’t quite as quick as the older Nabi 2. We use Geekbench 2 for general performance testing and the 10S scored 1207 on average. The Nabi 2 is quicker with an average score of 1551. (It’s still a massive improvement over the Kurio 7’s paltry score of 363, though.)

In SunSpider 1.0.2 we saw an average result of 2024ms, which is very poor for a new tablet. For gaming, the Kurio 10S managed 23 frames per second in our Egypt HD test which is noticeably better than the 16fps that the Nabi 2 could muster, and explains why the 10S feels zippy when playing games but sluggish when browsing the web, for example.

As with any children’s tablet, software is a crucial ingredient. The Kurio starts on the solid foundation of Android Jelly Bean (4.2.2) and adds a dedicated kids’ interface, which is different from the Kurio 7’s. You can create up to 8 user profiles, allowing you to customise which apps are available to each child.

There are two icons: a star and some cogs. Tap the cogs and a set of other icons appears. The first displays all the apps, and you can tap and hold on these and either drag them to the home screen or onto the star, which is the favourites list. Other icons let you change the profile picture and background/theme. The next icon is for choosing a Wi-Fi network, and is password protected so kids can’t mess with it. Finally, there’s a help icon which explains what all the icons mean.

There are a lot of bundled apps including some decent Disney titles (our tester particularly enjoyed Minnie’s Bow Maker) and big names such as Cut the Rope HD, Fruit Ninja, Angry Birds Space and Where’s My Water?

The range of Mr. Nussbaum educational games is dismal, just as on the original Kurio tablets. A colouring game is confusing as it looks like a normal colouring app, but you instead have to choose what you think is the main colour of the outlined object. Apparently a pair of trousers can only be blue: any other colour is ‘incorrect’.

Much more worthwhile is the MeeGenius book library of classic kids’ stories. The books can be read aloud (and the words highlighted as they’re read) or kids can read the stories themselves. For older kids and teens there’s the Aldiko Premium library, but only one title is pre-loaded.

Kids can access the standard Android web browser but it can be locked down using the Kurio Genius Filtering System and uses the KidRex search engine. In the parent profile, there’s a Parental Area where you can manage kids’ profiles and decide exactly which websites they can access. There are pre-defined lists of sites based on various age ranges, but all are US-specific, so you’ll have to add UK sites such as Cbeebies and Milkshake yourself. This is tedious, but worth it as you can be relatively sure your child won’t see anything inappropriate.

You can also choose which apps are accessible in each profile and when each child can use the tablet by tapping on hourly slots for each day of the week. There’s also a master timer, so once the daily limit is reached, the tablet will become unusable. It’s a pretty good system, but we still prefer Amazon’s FreeTime where you can give separate time limits for reading and everything else.