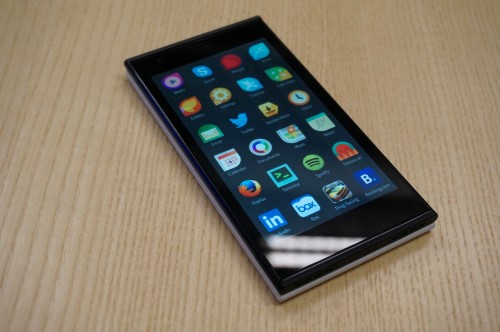 The Jolla is an interesting new smartphone with its eye-catching Sailfish OS. However, it’s too expensive for the average hardware on offer, a confusing interface and a reliance on Android apps. You’re better off getting the superior Nexus 5 and saving a few quid in the process.

The Jolla, in case you haven’t heard of it, is a smartphone from a team of ex-Nokia employees. It’s pronounced yol-la, and the device runs on a ‘new’ operating system called Sailfish. We say that because Sailfish is based on another mobile OS called MeeGo.

MeeGo was owned by Nokia but got ditched in favour of Microsoft’s Windows Phone operating system. The last MeeGo device was the Nokia N9 smartphone which never launched in the UK.

MeeGo is an open source project, so the ex-Nokia employees used it to make Sailfish. The Jolla smartphone is effectively the N9’s legacy.

It costs €399 (£329), so isn’t trying to compete with the Motorola Moto G or other budget smartphones. Currently, there’s a 2-3 week wait for delivery and you’ll have to pay €15 (£12) for shipping. It’s a little frustrating that a UK plug isn’t included but you’ve probably got a USB charger lying around already.

The Jolla’s design is quite unlike any other smartphone we’ve seen. The two-tone black and white case makes the Jolla look a little like Sony’s Xperia devices.

It has a two-piece construction with the front section being rounded at the top and bottom, and the back piece having rounded sides. The sides which aren’t rounded are square, resulting in a slab that’s not as comfortable to hold as other smartphones. It’s a little chunky at 9.9mm and a middling weight of 141g.

The rear piece is a cover which unclips to reveal a removable battery, micro-SIM card slot and microSD card slot.

The removable covers, which come in a number of different colours, each have an NFC chip which stores information. When attached to the phone, the case dictates the wallpaper, custom tones and other settings.

The feature is called ‘The Other Half’. The Keira Black and Aloe covers on Jolla’s site acost €29 (£24) each – an expensive way to change your wallpaper, but more reasonable if you just want to personalise your phone.

In the box you get a white ‘The Other Half’ cover and it’s prone to becoming grubby.

The Jolla is powered by a 1.4GHz dual-core processor made by Qualcomm and 1GB of RAM. That used to be about right for a mid-range smartphone, but these days the devices like the Nexus 5 and Moto G have quad-core chips. Dual-core can offer just as good performance with software optimisation and while apps generally open and close without hesitation and navigations animations are smooth, we’ve encountered some hiccups.

The camera app is sluggish to load and web browsing isn’t flawless, with pinch-to-zoom unreliable and a noticeable lag when rendering pages. Games don’t perform well either with Fruit Ninja playing at a depressingly poor frame rate.

There’s 16GB of internal storage and a microSD card slot underneath the rear cover for adding more, so we’ve no quibbles there.

A 7.98Wh battery is removable and we’ve found performance to be of a good standard. The Jolla has lasted a couple of days fairly comfortably and didn’t drop much in percentage overnight.

The rest of the specifications are towards the top end of the mid-range with a 4.5in IPS screen which has a qHD resolution (540×960). Colour saturation is good, giving the display an eye-popping look without slipping into garish territory.

Unfortunately contrast isn’t its forte, and the viewing angles aren’t up to the normal IPS standard we’re used to. There seems to be certain sweet spots where the display looks fine but at angles in between these, everything goes a bit dim and contrast drops off.

You get the usual Wi-Fi, Bluetooth and A-GPS, plus 4G support which you’d expect to find on a modern smartphone (the Moto G is stuck at 3G speeds, for comparison). It’s also got NFC, but this is only there for use with the Jolla’s interchangeable covers (see design and build).

There’s an 8Mp rear camera with an LED flash and a 2Mp front-facing webcam. Those numbers sound reasonable enough, but as we’ve said time and again, they’re no guarantee of quality.

As you can see from the test photo below, the main camera is ok when light is decent, but it struggles to come up with anything decent when indoors.

The camera app is extremely basic only allowing you to adjust the flash mode, white balan

ce and auto-focus. Switch into video mode and you can record 1080p clips – see our test footage below.

Out of all the current mobile operating systems, Sailfish is closest to BlackBerry 10 OS. There are no navigation buttons – everything is based on gestures.

Rather than the side-to-side navigation most people are used to in iOS and Android, Sailfish is laid out vertically. Top to bottom you have a lockscreen, homescreen and an app menu. Getting accustomed to the gestures is difficult and while that’s acceptable for a new operating system, the choice of gestures doesn’t seem to make much sense to us.

There’s a tutorial on first use and, while this helps, it’s still hard to get your head around.

There are also other things you need to learn such as swiping downwards on the screen itself to reveal the options menu and long-pressing the homescreen to close any open apps.

After a few days, we’ve just about got the hang of it but it seems like the team have made the decision to do something different for the sake of it rather than being a truly intuitive and natural experience.

Since all navigation requires swiping, it’s easy to do the wrong thing. For example, scroll up or down a web page too closely to the edge of the screen and you’ll open your notifications or the options menu. You can also inadvertently exit apps when you’re trying to swipe to the next page horizontally. It’s a similar problem to BlackBerry 10, but worse.

One of the issues is that the screen isn’t really big enough to perform the gestures well, meaning you have to be deliberate with your swiping.

The homescreen displays apps in a very similar way to BlackBerry 10: as you open more apps they get smaller to fit on the screen. However, if you have more than nine open, you can only see the most recent ones. The app tray at the bottom of the homescreen can be customised to your favourite apps.

Navigation aside, Sailfish OS runs smoothly and is good-looking. The lock screen is pretty but although it will show you if you have a new message or other notification, you can’t actually do anything about it from that screen – the same is true of Windows Phone.

There are a limited number of apps, just as you’d expect from a new platform but a life-saver is the support for Android apps. You can’t just use the Google Play Store, but there are third-party alternatives around such as Yandex.

Via Yandex you can install apps including Facebook, Skype, Twitter and Firefox. You do end up with a sort of two-sided experience and some of the Android apps we tested out did crash a few times.

It seems strange that Jolla has decided not to pre-install basic software such as an email client, media player, calendar, calculator, maps and a clock. These can be found under the ‘essential’ section of the Jolla store. But if they’re essential, then why not pre-install them?

Combined messaging is a ‘marmite’ feature which means all your messages, SMS or instant, are all viewed in one thread for each contact.

It’s great to see innovation in the smartphone market. We’re all for it, but do we really need another operating system alongside iOS, Android, Windows Phone and BlackBerry? Since the Jolla will cost you more than the Nexus 5, it’s lost out, we can’t think of why you would opt for it over Google’s flagship phone.

The Nexus 5 has a nicer design, better hardware all round (especially the screen and camera). Its performance is superior and you’ve got the wealth of content which the Store Play store offers.