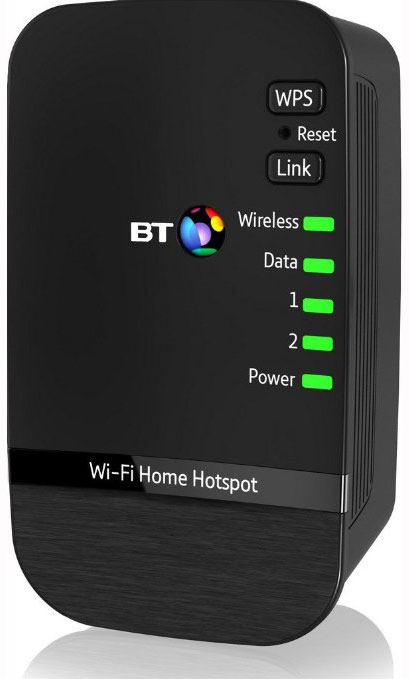 The BT Wi-Fi Home Hotspot 500 Kit performs brilliantly, offering the some of the fastest Powerline speeds over ethernet and Wi-Fi in our tests. There are faster 1,200Mbps-rated Powerline kits out there, but this is near the top of the 500Mbps-rated Adapter charts. It’s simple to install, is up and running in minutes, and both models offer two (non-Gigabit) Ethernet ports. Our only problem with it is its bulk and obtrusive black design (bachelor pad, anyone?), which may not appeal in your living room. The dinkier BT Mini Home Hotspot 500 Kit is much smaller but still black.

The BT Wi-Fi Home Hotspot 500 Kit is a well-made, fully featured 500Mbps Wi-Fi Powerline set of adaptors that performed well in our real-world speed tests. There are two versions: one Mini Wi-Fi Home Hotspot kit, and the other main set that includes a handy passthrough socket but might be rather too big and black for most living rooms.

Powerline is a fantastic tecnology that uses your house’s power lines to quickly and simply create a fast home network, that’s more and more in demand in the modern home.

Smart TVs and set-top boxes such as Sky+, Tivo and Apple TV all demand a fast internet connection for services such as iPlayer, Netfix, LoveFilm, catch-up TV and other entertainment goodies. Games consoles will all benefit from fast access, too.

But most people’s internet routers are set up away from the TV and games devices, and so we rely on patchy Wi-Fi connections to stream our movies, games and TV programmes. Streaming an HD movie or iPlayer show over Wi-Fi can lead to frustrating delays, pauses and failed downloads.

Powerline sorts this out by using the home power lines as an extension of the ethernet cable you connect between router and base Powerline adapter, and the second Powerline adapter in a second or third room.

Simply plug the base unit into a power socket near your router, attach that adapter via ethernet cable, then plug in the second adapter in the room with all your gadgets. You’re now ready to connect those gadgets to the Powerline adapter with a second ethernet cable.

It’s really as easy as that.

More advanced Powerline adapters, such as the BT Wi-Fi Home Hotspot 500 Kit reviewed here, also offer wireless functionality. The second adapter can create a new Wi-Fi hotspot in the room, offering much faster Wi-Fi for your laptop, smartphone or tablet.

The BT Wi-Fi Home Hotspot 500 is about as fully featured as fast Powerline adapter kits go. It offers both fast downloading over ethernet and speedy Wi-Fi. It has two 10/100 Ethernet ports on the second adaptor so you can connect more than one device via Ethernet. Take a look at the back of your Sky+ box or TV and you’ll soon see why having at least two ports is a real benefit. Like most 500Mbps Powerline adapters, because it uses 10/100 ethernet ports its maximum speed is pegged back to 100Mbps. If you want to hit faster speeds you need to go for a Powerline product that boasts Gigabit ethernet ports, such as the Devolo dLAN 1200+, Solwise SmartLink 1200AV2 or TP-Link AV1200 Gigabit Powerline..

There are two models available. The larger BT Wi-Fi Home Hotspot 500 has a very useful pass-through power socket on the base unit, meaning you don’t lose use of the power socket it’s plugged into. Most routers find themselves near computers, printers, hard drives and other gadgets – all of which demand a power source – so keeping one socket working is a real help. It would have been even more useful if both adapters featured the passthrough socket, however – as you get with the Devolo, Solwise and TP-Link adapters.

The smaller BT Mini Home Hotspot 500 Kit is much more discreet – although still a not-too-home-friendly black – but lacks the pass-through socket.

Both the Mini and larger model ship with the base unit, second adapter and an ethernet cable.

The one thing we weren’t particularly keen on is the design. The adapters look great in very cool black with plenty of helpful indicator lights showing you what’s going on, but we’re not sure that the big black bulk of the larger unit will be welcomed in many liiving rooms. If you can hide the second unit away from sight we recommend this Powerline champion. If its size and colour – nearly all other Powerline adapters are white – look too obtrusive to you you might consider the £95 Devolo dLAN 650 triple+ starter kit, which is taller but thinner and white, plus boasts three ethernet ports and a pass-through on both the base and the second adaptor.

First we must emphasise that despite all the Powerline manufacturers claming 200Mbps or 500Mbps speeds these are theoretical maximums, and you will never see such speeds via Powerline.This is caused by numerous factors including the set up and age of your power cabling, distance from the router, circuit breakers, and other electrical noise on the lines – the worst offenders being power chargers.

You’ll be lucky to get 100Mbps from a 500Mbps Powerline, but don’t fret as this is well fast enough for most needs, such as watching catch-up TV or downloading fairly large files. And rest assured it’s much, much faster than standard home Wi-Fi.

We tested the BT Wi-Fi Home Hotspot 500 in a Victorian house with fairly old wiring and the usual array of electronic devices (TV, Sky+, Hi-Fi, lamps, microwave, computers, etc) plugged into the power lines. The Internet router was situated in the office on the second floor, and we used Powerline to test data speed on the ground floor.

If your house was built more recently you may well achieve faster speeds than we did, but we use this house to get consistent speeds for a proper Powerline comparison.

We got speeds up to 94Mbps but the house average was 66Mbps using Powerline and ethernet. This was the one of the fastest average speeds we got in our comparison of 500Mbps Powerline products, and is sufficinet for most users, and we downloaded HD TV with few pauses.

Using the Hotspot 500’s Wi-Fi function we created a new hotspot downstairs and achieved an average speed of 54Mbps – compared to the 16Mbps we could get through the home’s standard Wi-Fi. It took just over 2 minutes to pass a 1GB file using the Powerline Wi-Fi, compared to over 8 minutes using the normal Wi-Fi. That, again, was the one of the fastest in all our Powerline Wi-Fi speed tests.

However much we might bang our fists on the table about not getting the advertised 500Mbps (300Mbps claimed for Wi-Fi) there’s no denying that an ethernet-wired average of 66Mbps and a Wi-Fi speed of 54Mbps is leagues faster than the 16MBps we had before when using Wi-Fi.

The BT Wi-Fi Home Hotspot 500 was only just beaten to the top spot for fastest 500Mbps Powerline kit we tested over ethernet (take a bow the lesser-featured and super-cheap Zyxel HD Powerline) and offered the fastest Wi-Fi. You will find faster speeds on the latest Gigabit 1200Mbps Powerline adapters, but the 500Mbps models are still worth it as they are generally cheaper and still fast enough for most home setups.

Check out all our Powerline adapter reviews and also our group test of the best Powerline adapters we’ve tested. You can get more information on Powerline including explanations of Powerline speed myths and lots of tips and trick in our feature What Is Powerline.