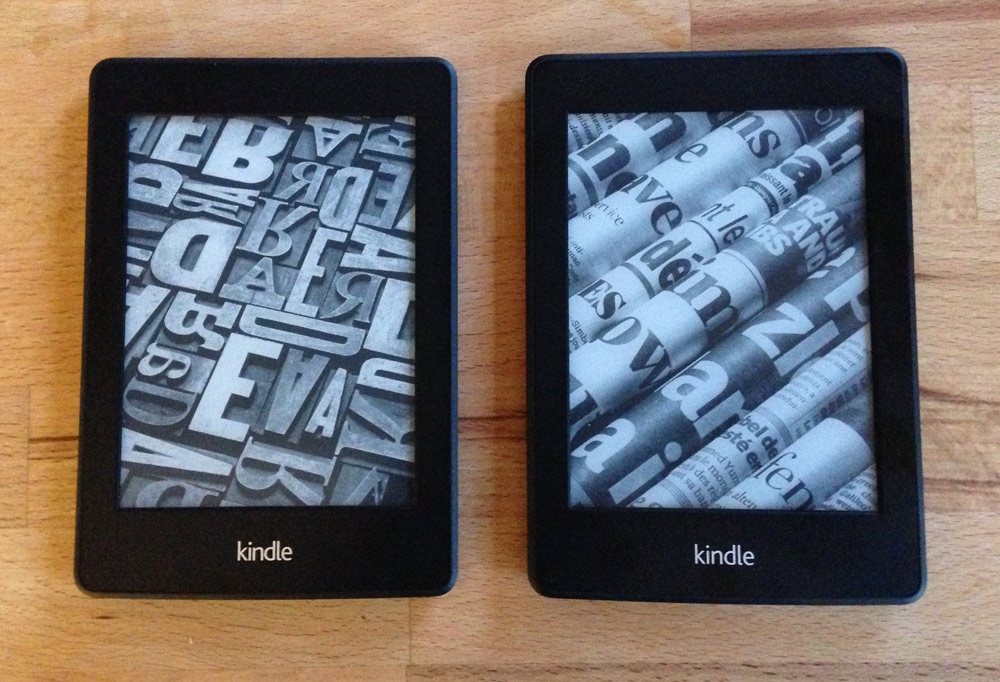 If you can afford it, you won’t be disappointed with the latest Paperwhite but it’s worth checking out the £49 Nook GlowLight and associated book store before taking the plunge.

Some would argue that eReaders are outmoded, with the latest lightweight tablets being just as comfortable to hold for long periods, having higher resolution screens and also able to do a multitude of other things that an eReader can’t. Many, such as the Tesco Hudl and Amazon’s own Kindle Fire HD are barely more expensive than the Paperwhite, too.

Such facts may be relevant for the occasional reader, but for genuine bookworms, they’re not.

Ereaders including the Kindle Paperwhite are designed to do just one job, and do it well. There’s really no comparison between an E Ink screen and a tablet’s LCD screen when it comes to long periods of reading. The Paperwhite’s E Ink screen may have just 16 shades of grey to render text and images, but it’s the closest thing to a real book and remains easy to read even in direct sunlight. Try that with an Android tablet or iPad mini, and you’ll quickly switch back to an eReader.

The Paperwhite, unlike many other eReaders, has a built-in light so you can read in dim conditions, or even complete darkness.

At £109 it’s far from the cheapest option, though. The basic Kindle costs only £59 while the Nook Simple Touch GlowLight, which matches the Paperwhite with a built-in light and touchscreen, is only £49 from Argos.

Another rival is the Kobo Glo, which is marginally cheaper than the Paperwhite at £100. Kobo’s newer Aura HD costs more at £140, but has a bigger 6.8in screen with a massive 1440×1080 resolution.

The Paperwhite weighs a little over 200g, which means it’s lighter than your average paperback and virtually effortless to hold for long periods. The fact it’s no thicker than a pencil also helps, and most people should be able to grasp the device with a thumb hooked around one side and fingers the other side – it’s just 117mm wide.

Amazon calls this the all-new Paperwhite, but you’d have a tough time telling it apart from the original Kindle Paperwhite since both look identical from the front.

Turn it over and you’ll find the same soft-feel black plastic that makes it so comfortable to hold. The only external change is the huge Amazon logo on the back, which was a Kindle logo on the older model.

The only button is at the bottom, and turns the Paperwhite on and off. Next to it is the only connection – a microUSB port for charging and transferring files (more on that later).

As with all of Amazon’s current eReaders and tablets, there’s no expandable storage so you’re stuck with the meagre 2GB of internal storage. However, that’s still enough for hundreds of books, so chances are you won’t ever fill it up unless you never delete titles you’ve read.

If you like to be able to buy and download new books wherever you are – in the car, or on holiday abroad, the 3G model is the one for you. There are no subscriptions charges for the built-in SIM: it just works. Neither the Nook nor Kobo offer 3G connectivity.

The main change in the new model is an improved backlight, which Amazon says reduces eyestrain. Put the new Paperwhite next to the old and the difference is easy to see (although it isn’t so obvious in photos – the 2013 model is on the right below, with the 2012 version on the left).

The new backlight is much more even and (at the max. setting which you’ll probably never need) even brighter. 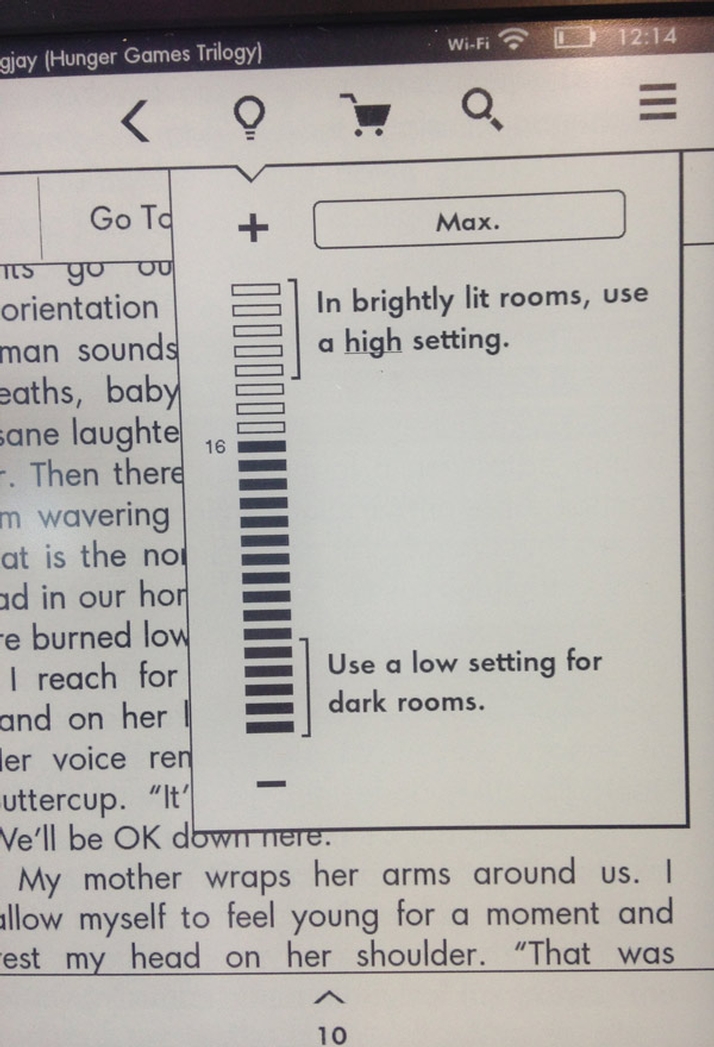 We found that it was rarely necessary to set the backlight to more than 50 percent, though, and if you stick to around 40 percent (and read for half an hour per day) the battery should last for two months, just like the original Paperwhite.

The screen’s resolution remains the same at 768×1024 pixels. That’s 62 percent more pixels than most eReaders which have a 600×800-pixel screen, and it makes a noticeable difference to the sharpness of characters. It isn’t as high at the more expensive Kobo Aura HD, but in our view, you don’t need any more pixels for reading books.

Amazon says the 2013 Paperwhite has better contrast than the 2012 model, but we couldn’t see any difference at all.

Where you will notice a difference is in performance. Pages turns are marginally quicker but where you’ll appreciate the extra speed is when browsing the Kindle store or using the Paperwhite’s menus.

The new Kindle is literally seconds quicker at displaying listings and menus, making it a less frustrating experience. Of course, if you’re used to an iPad or any other tablet with an LCD display, an E Ink screen can still be painfully slow.

As with the improved contrast, it’s impossible to tell the difference. Entering your email address and password, or using the keyboard to search feels no different on either device – both are surprisingly responsive.

If you’ve never used a Kindle eReader, you’ll appreciate the smaller things, such as the status bar at the bottom which can display either your position in the book, the time left before you finish the book or – most usefully – the time left in the chapter. Times are calculated based on your current reading speed, and it’s always accurate.

With the launch of the new Paperwhite came a software update (also available for the 2012 Paperwhite – not exclusive to the latest model).

The latest feature to be added is FreeTime, a child-friendly mode which is password protected and ensures you have complete control over which books your kids can access. It also locks down the Paperwhite, removing any internet access and preventing them from buying books from the Kindle Store.

FreeTime also lets you track your child’s reading progress and they can earn badges and rewards.

Of the new features, our favourite is Page Flip which brings up a slightly smaller page on top of the one you’re reading. You can then use the slider at the bottom to jump around in the book without losing your place. That’s difficult on other eReaders.

The weirdest new feature, though, is Vocabulary Builder. This shows a list of words you’ve looked up in the dictionary, and can see them in context using ‘flashcards’ – the intention being that you test yourself to see if you’ve remembered their meaning.

Existing Kindle owners will recognise the X-Ray feature where you can see all the sections in a book which mention places, people, characters and ideas. For example, if you tap and hold on a prominent character’s name, X-Ray will give you short bio explaining who they are and other background information.

It’s a neat idea, but X-Ray isn’t available in all books. Still, you can still get a dictionary definition or view the Wikipedia entry.

You’ll often see underlined passages: sentences which other Kindle owners have highlighted. It’s also possible to select one or more words and add your own notes.

If you have the Kindle app installed on other devices such as your smartphone, tablet or PC, the Whispersync function means you’re taken to the last page you read regardless of which device you choose to use. Assuming you’re not sharing your Amazon account with another family member who also happens to be reading the same book, this is a great time-saving feature. Bookmarks, notes and highlighted sections are also synced.

Originally, we scoffed at the idea of having a web browser on a device with an E Ink screen, but the Article Mode – which strips web pages of all but the main text – makes a lot of sense. You can comfortably keep up with the latest news, for example, on a screen that’s easier to read than a tablet or laptop.

However, instead of using the usual page turn method, you ‘scroll’ up and down these pages which is a bit confusing. If you want to, you can view websites as normal, but it’s hard to precisely click on links and scroll around. 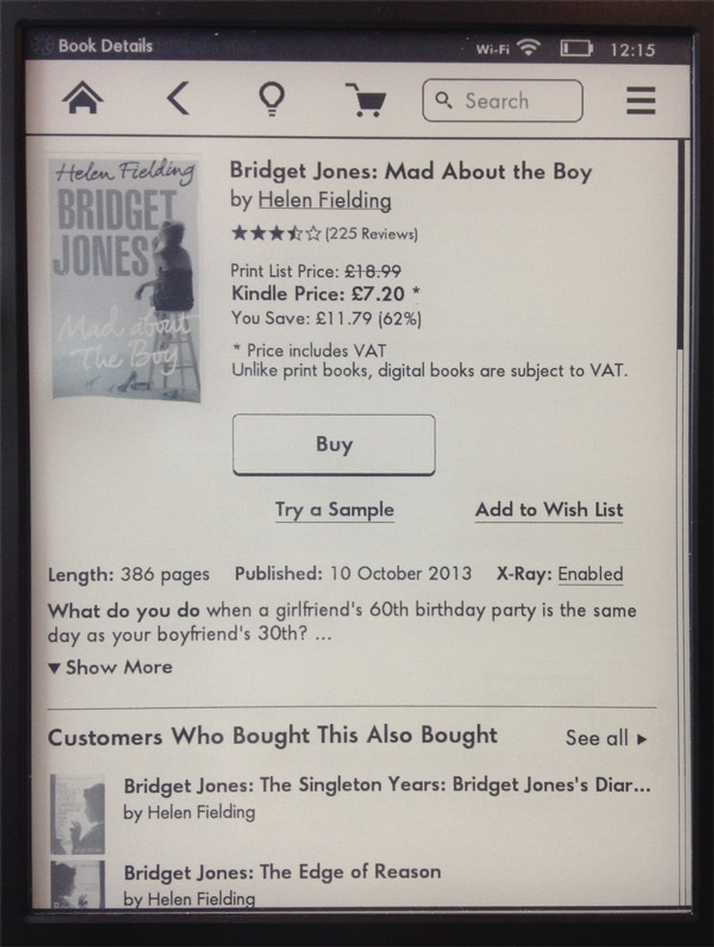 As with all Kindles, you’re locked into Amazon’s world. Just about every eReader out there supports the common Epub book format. Not the Paperwhite. It uses Amazon’s own proprietary AZW format.

If you want to buy content (as well as books there are newspapers and magazines) you must get it from the Kindle store.

It’s far from a bad thing: Amazon usually has the best selection and prices, but there’s always a chance that the obscure book you’re looking for won’t be there. Naturally, you’ll occasionally find yourself in a similar situation with a Kobo or Nook eReader, but the difference is that you’re not tied to the Nook or Kobo store: you’re free to obtain books elsewhere.

When you connect the Paperwhite to a PC using the included USB cable, it’s possible to drag and drop documents to the Documents folder. You can use this, along with the free Calibre software, to convert books into a format that’s compatible with the Paperwhite.

The Paperwhite gives you an @kindle.com email address. You can use this to email files to your Kindle – PDFs, Word documents and a few other common formats are supported. This lets you read text-based documents on your Paperwhite without too much hassle.

The latest Kindle Paperwhite offers subtle improvements to the original – not enough to warrant upgrading, mind you.

If you want to watch videos, browse the web and email as well as reading books, you might be better off spending an extra £10 and buying the Tesco Hudl. However, if you want the best reading experience, a dedicated eReader is still the way to go.

The Paperwhite’s price remains the same as ever at £109, and it’s hard to justify the extra expense over the £49 Nook Simple Touch GlowLight. Plus, Amazon still stubbornly refuses to let you buy anyone a Kindle book as a gift in the UK, and you can’t lend a book to a friend as you can with a Nook.

Yes, the Kindle has better software, better battery life and a higher-resolution screen with a better backlight. There’s also the more expensive 3G version, which means you can buy books from just about anywhere in the world.

However, the selection of books available on the Nook store is pretty much as good as on Amazon’s and most big-name titles are price matched, so those on a budget could save money by buying the GlowLight.

Alternatively, if you don’t mind taking a risk with no warranty, look for a used, first-generation Paperwhite – you can pick one up on ebay for between £60 and £70 now.