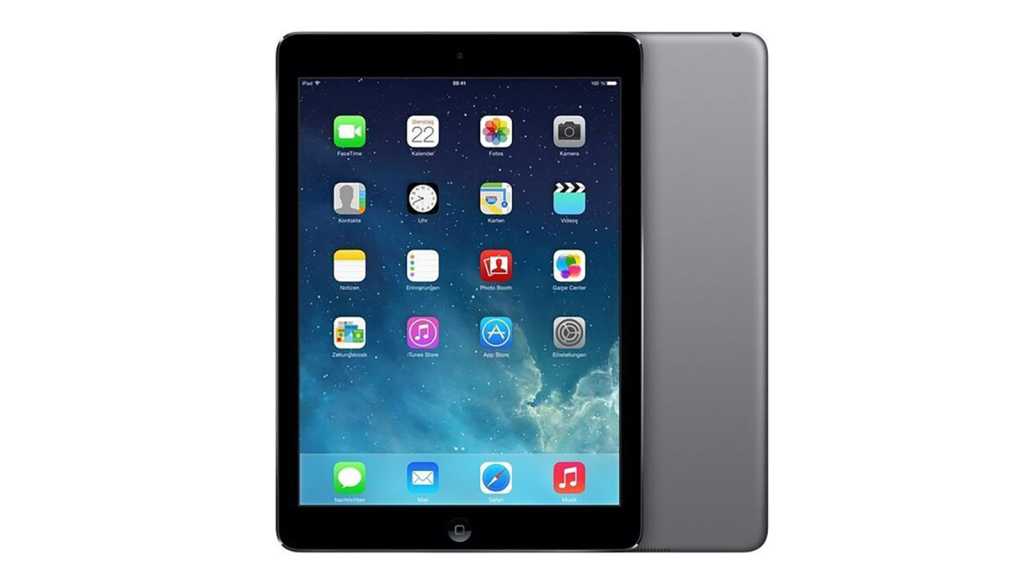 In many respects a triumph, the iPad Air also introduces compromises to hit the low-weight/thin-case targets. Sound quality through the new stereo speaker has deteriorated, and although a matter of taste we found the iPad mini-style case loses the premium feel of preceding generations of iPad. The iOS 7 interface, not popular with every user, cannot be avoided on this device and it suffers some stickiness in app zooming. Ultimately though the iPad Air will suceed by simple nature of its new weight – the lose of almost 200g is so significant to its handling, and means it could encroach on E Ink ebook readers; only with the power and versatility, not to mention gorgeous colour screen, of a real iPad.

With all due respect to Microsoft and the makers of tablet PCs over the 20 years preceding its launch, the iPad was the tablet that invented the current tablet market. It’s been with us a few years, but the iPad remains for many the byword for quality in the tablet world. But is it still number one?

For Apple the challenge is simple but difficult. Once you are at the top, there is nowhere else to go. The challenge to the iPad comes from a variety of angles. Microsoft’s own Surface Pro is a shrunk-down laptop offering true power PC computing on the move. The best Android slates such as those from Samsung and Asus offer something approaching iPad performance and style in often cheaper packages. Meanwhile Nokia’s Lumia 2520 and other Windows RT tablets are grown up Windows Phones.

When Apple announced the all-new iPad Air the response was less than entirely hagiographic. It is, when all is said and done, an iterative upgrade on an already great product. And it isn’t cheap. But is the iPad Air still the best tablet you can buy? Read PC Advisor’s in-depth iPad Air review to find out.

iPad Air review: what it is, specs, price

The iPad Air is a tablet computer with a 9.7in display. It’s the fifth-generation of tablet from Apple, and launched in November 2013. Thinner and lighter than its predecessor, the iPad Air weighs in at 469g for the Wi-Fi-only device and 478g for the Wi-Fi and cellular flavour. It measures 240×169.5×7.5mm.

The iPad Air runs iOS7, the seventh-generation of Apple’s mobile operating system. This is a stable and colourful operating system, that offers access to iTunes for music, movies and apps, as well as the Newsstand for magazines. iOS7 is excellent for emails, social media and web browsing.

The iPad Air has front- and rear-facing cameras rated at 1.2- and 5Mp respectively, and an 8,827 mAh battery cell. Connectivity options include Wi-Fi, Bluetooth 4.0, and 4G LTE cellular connectivity. Indeed, the iPad Air has a dual-antennae setup to allow multiple in/multiple out (MIMO) connectivity. However, the iPad Air is still using the older 802.11n standard rather than the latest 11ac.

At the top end of the tablet market, the iPad Air ranges in price from £399 to £739 inc VAT. The price depends on the amount of storage, and whether a cellular and Wi-Fi, or Wi-Fi-only model is selected. (See also: Best tablets group test.)

The iPad Air was tested by Andrew Harrison.

In the view of our tester the Apple iPad is still the most desirable tablet on the market right now.

It seems much smaller than previous full-sized iPads, despite having a similar-sized screen. The iPad Air styling follows exactly the original iPad mini, with the same thinned bezel side edges with broader borders top and bottom.

The iPad Air is primarily a portrait-mode tablet in 3:4 aspect ratio, yet one that works well on its side in landscape. Contrast this with successive Google Android tablets that take a 16:9 widescreen, a shape that’s better for video but when used for reading webpages or ebooks in portrait you get an overly tall narrow window.

When we first tried the new iPad Air we though it quite widescreen in appearance, not unlike a 16:9 device. The proportions didn’t look right any more – by slimming the edges but not the sides, the tablet looked too tall, not so aesthetically ‘right’.

Foremost, the iPad Air is about lightness. We tried a 128GB iPad with 4G modem and on the scales this – the heaviest possible version of the iPad Air – does weigh just 478g, and is only 7.5mm thick. If you’ve used any previous full-size iPad, you’ll notice immediately the transformation from that circa-650g weight.

In general handling, the lightness remains the breakthrough, more so than the reduction in thickness. Yet we found the shape and feel much less tactile than the shape of the iPad 2, 3 and 4, with their gently curved radiuses at the rear and smooth snag-free edges around the front. The iPad Air has harder, less well finished edges which may add more purchase to the fingers but make it less satisfying to handle.

The iPad Air is primarily a portrait-mode tablet in 3:4 aspect ratio, yet one that works well on its side in landscape. Contrast this with successive Google Android tablets that take a 16:9 widescreen, a shape that’s better for video but when used for reading webpages or ebooks in portrait you get an overly tall narrow window.

When we first tried the new iPad Air we though it quite widescreen in appearance, not unlike a 16:9 device. The proportions didn’t look right any more – by slimming the edges but not the sides, the tablet looked too tall, not so aesthetically ‘right’.

The iPad Air screen is in essence unchanged since the first iPad with Retina display – a 9.7in capacitive touchscreen using IPS technology which delivers rich, faithful colours and clear viewing from any angle.

Strictly speaking it is a 9.7-inch (diagonal) LED-backlit Multi?Touch display. And that IPS display is blessed with fingerprint-resistant oleophobic coating.

That 2048×1536 resolution makes for a pixel density of 264 pixels per inch (ppi). You may find the odd tablet that is sharper, and certainly a few smartphones, but when you look at the iPad Air’s display you see only a vibrant and sharp display.

The iPad Air has a rear-facing 5Mp iSight camera, with f2.4 aperture. On the front is a 1.2Mp HD webcam. The former takes full-HD video. The front-facing camera is a 720p video camera for FaceTime and Skype.

Existing iPad owners should note that the cameras front and back are almost the same as on the previous model, with the addition of sensor backside illumination to help in low light. And we did find night-time Skype calls were more clearly lit than before.

You won’t be buying the iPad Air as your main camera. But if you take photos and video with your iPad you won’t be disappointed. It is a solid performer in this respect, no better than it ought to be.

Here is test video taken with the iPad Air. We’ll be uploading some test photos soon.

We ran some benchmark tests, with the caveat that synthetic benchmarks should always be taken with a pinch of salt. They are a general guide only.

Nevertheless Geekbench 3 showed the iPad Air’s processor clocked at 1.39 GHz – a tad higher than the Apple A7 in the iPhone 5s which reads 1.30 GHz – and it returned a score of 2703 points in multi-core mode; and 1487 points for a single core.

We can compare to the iPhone 5s though, which returned figures around half as much: 722 points for single-core and 1296 points multi-core. And does the iPad Air feel twice as fast as theiPhone 5S? Not at all.

In the Egypt HD graphics test the iPad Air could play at an average framerate of 48 fps, and we really can’t imagine anyone being disappointed by its gaming capabilities.

A new 2×2 wireless setup means two antennae inside to improve Wi-Fi performance. In our tests we found no perceptible speed difference, since most iPad use is loading webpages where the internet connection is likely slower than Wi-Fi anyway. Range may have increased though, maintaining a usable connection further from a base station, and that is a useful bonus.

Battery life is still exemplary, with Apple assuring around 10 hours continuous use, while we found that occasional but steady use meant it could last the best part of a week between charges.

We’re a little troubled by the sometimes unsmooth interface. This is a general criticism of iOS 7 but one we didn’t expect to see on the latest iPad with bestest-yet graphics processor.

Most apparent with app zooming, when you open or close an app and return to the home screen, we saw jittery animations. It’s not always apparent, and we suspect many people will probably not notice, let alone be troubled by it. Elsewhere in text scrolling and pinch-to-zoom actions there were no such issues, as free and fluid as ever.

Sound quality is demonstrably reduced for the iPad Air. The new iPad now has a tiny pair of speakers to play in stereo, against the former single mono speaker.

It’s almost as loud as iPad 3 at full volume but has a quacky coloration as well as sounding rougher, more sandpapery. There also seems less treble extension which reduces clarity.

The iPad Air has the now-familiar layout of iPad buttons: Lightning port central at the bottom, volume buttons and screen lock (or volume mute) on the right, On/Off (or sleep/power) button on the top-right, and a headphone jack at the top left.
As expected, the iPad Air features the now-standard Lightning port for charging and syncing. To either side you can see the iPad Air’s speakers.

What is visible is an additional pin hole on top, for a new second microphone that should enable improved reduction of ambient noise, as found on the iPhone and various MacBook models now.

The iPad Air is without doubt a great product. But it now exists in a world of great tablets, and some of them are cheaper – the Nexus-branded Android tablets and the Nokia Lumia 2520 spring to mind. So should you buy the iPad Air?

The iPad Air is thin and light, and beautifully designed and built. It has an amazing display great for viewing video, ebooks and web browsing, and myriad storage and connectivity options. Performance and battery life is as good as it gets in this space, and iOS7 remains the best mobile platform, in our view, although this is a subjective view and recent versions of Android and Windows have certainly caught up.

We weren’t impressed with the audio quality afforded by the iPad Air’s onboard speakers and the cameras are nothing to write home about, although entirely fit for purpose. It’s a matter of taste but we found the iPad mini-style case loses some of the premium feel of preceding generations of iPad. Finally, although at £399 the 16GB Wi-Fi-only iPad feels well priced, we’re not sure what would persuade us to shell out £739 for the top-of-the-range model. This feels expensive.