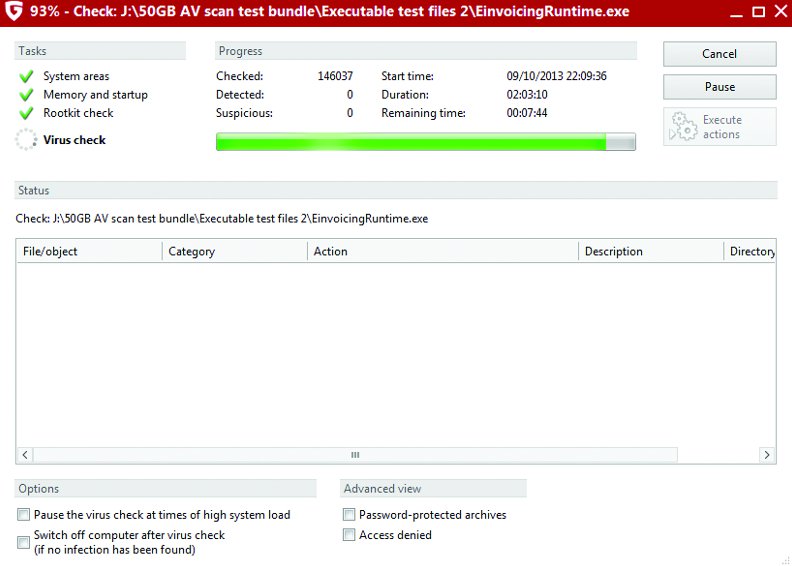 With excellent protection and decent performance at a good price, we like G Data TotalProtection 2014.

G Data also offers a startup manager, a secure data store and backup, including FTP, although no online storage is included. The three-PC licence is at the lower end of prices for decent security software including anti-virus, firewall etc.

The interface has been revamped, with good effect. There’s been a trend in the past couple of years to limit the number of icons on the main screens of internet security packages in the hope of keeping things simple. This is fine when you’re using the main functions, but it can make finding subsidiary functions more difficult.

G Data has bucked that trend with a conventional layout, putting nine icons along the top of the panel; each acts as a tab to a corresponding control area. Individual panels are also well organised, with the checkboxes and switches clear and organised. See also: Group test: best security software of 2014.

The suite uses two separate antivirus engines for additional protection. Its performance in AV-Test’s lab results isn’t noticeably better as a result, however.

Browser protection includes a feature called BankGuard, which sits in the browser to defend against installed Trojans after SSL-encrypted data from your bank has been unencrypted for display.

G Data claims it’s effective against 99 percent of such attacks.AV-Test awarded it 6/6 for protection, which combined with 4.5 for performance, and 5.5 for usability means G Data TotalProtection 2014 scores a healthy 16/18 overall.

This is very low, but the software fingerprints files well, so a second run scanned the same number of files in just 54 secs.

We also measured very little resource hit when we compared file copy times with and without a full scan running in the background.

It took just 3 percent longer with the additional workload.

AV-Test noted rather more impact on PC performance, and the package scored 4.5 out of 6 points in this category. In the Usability category it dropped just half a point, and it scored a perfect 6 in Protection, resulting in a very good 16 out of 18 points overall. Visit Security Advisor.