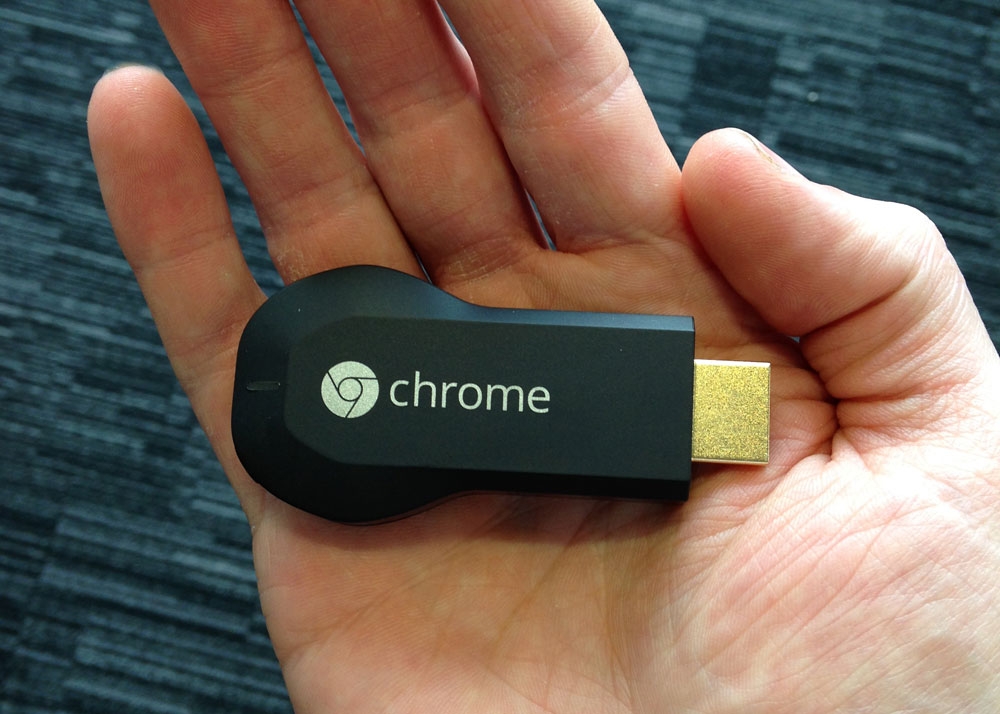 A brilliant, low-cost add-on for Android device users in particular, providing a blissfully simple way to beam video from your device to the big screen. People who want to stream their own media collection should look elsewhere. The Chromecast is cheap and easy to use, but there aren’t many apps that support it yet. This situation is bound to change over the coming months, but for now you might find your existing smart TV offers more.

The Chromecast is quite unlike the Apple TV, Roku or other regular media streaming devices. It consists of nothing more than a small dongle that you plug into your televison’s HDMI port, and as a standalone device it does nothing at all – there are no internet channels to watch, nor even any way to control it. It’s a low-cost competitor to Apple TV and allows you to stream media using smartphones, tablets, PCs and laptops. See also: Chromecast vs Roku Streaming Stick comparison review.

It only comes alive when connected to other devices on the home network, be that an Android or iOS device, laptop or Google Chromebook. You can beam content from compatible apps on those devices, or simply mirror their screens, allowing you to turn your television into a big-screen version of your phone, for example.

Setup could barely be simpler: you plug the Chromecast into your TV’s HDMI port, download Google’s Chromecast app for your device, punch in an onscreen code and off you go. It’s worth noting, however, that you also need to run a micro-USB cable into the back of the Chromecast to power the device. Most modern TVs have USB ports that can be used for this job, but if yours doesn’t you may need to run a lengthy USB cable from a power socket.

The selection of Chromecast-compatible apps on Android and iOS is pretty thin: Netflix, iPlayer, BT Sport and, of course, YouTube are among the highlights. There’s no Spotify, Sky or other UK terrestrial channels, though.

Streams are activated simply be pressing a button in each app and streaming quality is generally excellent, with little breakup and few video/audio sync issues. And once the stream has started, you can close the app on the phone/tablet and carry on using the device for other tasks.

It’s also possible to stream content from non-compatible apps by mirroring the screen of an Android device (this isn’t an option in iOS). Screen casting was almost flawless from our HTC One handset, with only fast-moving 3D games creating the occasional glitch on the big screen.  (See also: Now TV review.)

On the PC, an extension for the Google Chrome browser allows you to stream individual browser tabs to the big screen, which worked fine. The websites of certain video-on-demand services, such as Netflix and iPlayer, are also Chromecast-compatible, allowing you to beam shows and carry on surfing elsewhere, effectively turning your television into a secondary PC screen.

Streaming of media on the home network is more problematic. There’s no easy way to stream video content or music stored on your PC – a Chrome browser extension called Videostream claims to make this possible, but failed in our tests on two different PCs. The free Plex media-server software is also nominally Chromecast-compatible, but we found performance to be very sluggish on our home wireless network, to the point where streaming video was almost unplayable.

One final issue of note: Google’s privacy notice says the company “may collect system activity, crashes, and other details about how you use Chromecast, including use of apps and domains (but not full URLs) accessed by Chromecast”. As ever with Google, your lifestyle habits are being beamed back to the borg.