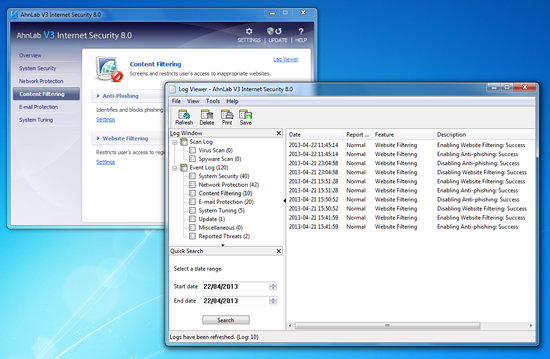 Scraping an AV-Test Certification may put some people off AhnLab V3 Internet Security 8.0, but standards in malware protection are now very high. We wonder if its scanning should be more thorough too. In its favour it’s very easy to setup and use. For general-purpose home protection it’s definitely better than having nothing, but there are more secure alternatives available at similar and lower cost.

AhnLab is a developer of internet-security software for Windows, and essentially unknown to consumers in the UK. Most of its customers are in its home of South Korea, where the company is also headquartered. See  Group test: what’s the best security software?

Its main IS package is V3 Internet Security 8.0 and this is available as a three-PC, one-year subscription for £49.60, direct from the AhnLab site. Take a look at Security Advisor too.

The software has a very conventional interface, with none of the flat Windows 8 cosmetics that most of its rivals have adopted.

The main dialogue has six options in a menu down the left-hand side, with information or editing panes to the right. At the top are additional buttons for settings update and help.

It doesn’t include parental control or any multi-platform protection, such as its Online Security for Mobile, an Android anti-virus app, which is sold separately.

Full and custom scans can be initiated or scheduled from the main control panel and you can also scan individual files or folders from an option in the file browser right-button menu. This is labelled AhnLab System scan, though, which is a confusing term, when it may only apply to a single file.

When we scanned our standard 50GB test-file bundle, the program took 11 min 44 sec to examine 8765 files, which gives a scan rate of 12.5 file/sec. This is quite slow, in the bottom quarter of the suites we’ve tested.

More worrying, though, is the low number of files scanned, with only Bullguard IS 12 checking fewer.
Although we’ve said several times that different checking algorithms define different numbers of eligible files, it’s hard to believe under 9000 are worthy of examination, out of a basket of over 1.2 million files.

Repeating the test, the program checked exactly the same number of files, but only took 3 min 4 sec to do so. This suggests that AhnLab uses file fingerprints to determine which files need rechecking.

Copying a 1GB file with a scan running only added a 4 seconds compared to no active scan, giving a low resource footprint here of just 9 percent. This program didn’t hog our PC while scanning.

Unusually, V3 IS has had a chequered history with AV-Test (www.av-test.org). In the site’s group test of Windows 7 applications last December, the suite failed to reach certification, with an overall score of 8.5/18.0.

That’s pretty low and the Repair component scored just 2.0/6.0, with less than half of the malicious components of the test threats effectively removed.

Things are bit better with the latest evaluation, tested under Windows 8. With figures released in February of this year, the software scored 10.0/18.0 and regained its certification.

Even so, it still managed to score 2.0/6.0 under Protection and it’s mainly its usability rating of 4.5/6.0 that helped keep its head above water.

The Protection section is divided between widespread malware and zero-day malware attacks, where the package scored 99 percent in the first but just 84 percent in the second.

It shows how strong the competition is that 84 percent is 11 points below average, and that 99 percent only hits the mean.