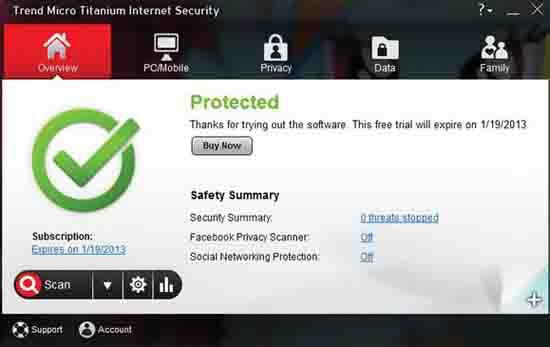 Overall, Trend Micro Titanium Internet Security is a great choice. This security suite boasts excellent performance, a quick installation process, a user-friendly interface, and speedy scans. Its settings pane is a tad confusing, but that’s a minor issue considering the protection you’ll be getting.

Trend Micro Titanium Internet Security 2013 (£60 for 1 year/3 PCs) certainly lives up to its name. This “titanium”  security suite doesn’t let anything get through—in our tests, it earned excellent marks in just about every category. It also has a fairly user-friendly interface and a quick installation process, which makes it an all-around great pick. See also:  BEST INTERNET SECURITY SUITES.

In our real-world attack tests, which indicate how well an  antivirus program will be able to block new malware attacks as it encounters them in the wild, Trend Micro’s suite completely blocked every threat that it faced. Needless to say, this means that the program will likely be able to keep you very secure, even when new malware programs are introduced in the future.

Trend Micro nabbed high marks in most of our other security tests. In our malware-zoo detection test, which exposes the program to a collection of malware that had been introduced in the preceding four months, Trend Micro’s package detected 100 percent of known malware samples. In our false-positive test, which checks to see whether a product mistakenly flags a known safe file as being dangerous, Trend Micro identified just one safe file (out of over 250,000) as malicious.

In addition, the suite did very well in our system cleanup test: It detected and disabled 100 percent of infections, and it managed to fully purge the system of 80 percent of those infections.

Trend Micro Titanium Internet Security 2013 is also a fairly speedy and lightweight program—most of the time. In our performance tests, the program added just 0.3 second to startup time (compared to a system that had no antivirus program installed), and 3 seconds to shutdown time. However, we found that it dragged down file copy operations more than most of its competition did.

Installing the Trend Micro package is a breeze—you have just three screens to click through and an optional registration screen (which asks only for your email address). Note, however, that the program does try to install three separate Firefox add-ons: a browser exploit prevention add-on, which blocks malicious code from running; a certificate add-on, which checks the safety of websites, links, and wireless network connections; and a toolbar add-on, which also apparently checks the safety of links.

Trend Micro’s user interface is relatively easy to understand. The main window has five tabs along the top: an Overview tab, and others for PC/Mobile, Privacy, Data, and Family. The Overview tab shows your protection status, along with some additional stats (such as how many threats have been stopped). This screen also has a scan button, a settings button, and a security-report button.

The PC/Mobile tab shows PC- and mobile-related security features, such as the system tuner and the rescue-disk creator, as well as links to get Trend Micro’s apps for your Android devices and Mac systems. The Privacy tab deals with social networking, the Data tab covers data security along with Trend Micro’s secure erase feature, and the Family tab holds parental controls.

The settings pane, which you can access via the first tab, features basic settings for virus and spyware controls, Internet and email controls, and exception lists. You’ll also find a button for other settings, such as system startup, network settings, and the background picture for your main window. Trend Micro’s settings don’t seem to be overly geared toward the advanced user, but the suite could still do a better job of explaining the settings and features within the program.