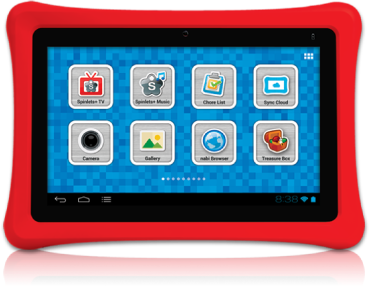 It’s not without its faults, but the nabi 2 is currently one of the best Android kids’ tablets around. It’s rugged and has an easy-to-use kids’ interface. You’re unlikely to want to use it yourself, but it does allow you to use the full Android interface, and now has Jelly Bean and access to the Google Play store and Google apps.

Choosing a tablet for your child isn’t easy. Do you go for an iPad mini Retina or another ‘proper’ tablet, or do you opt for a dedicated kids’ tablet that’s designed to be safe both in terms of hardware and software? See the  best tablets.

For younger children, a dedicated children’s tablet is usually the best choice. There are loads to choose between, but the nabi 2 stands out from the crowd. Google recently certified the tablet, which means it now has the Play Store (full of great apps for kids) and all of Google’s other apps including Maps, Gmail, News and YouTube. As a bonus, it also got an update from the original Ice Cream Sandwich OS to Jelly Bean.See also: Group test: best tablets for children

Although launched back in 2012, the nabi 2’s quad-core nVidia Tegra 3 processor is still zippy enough to make it feel faster than most kids tablet – even today.

It also has a silicone bumper, similar to the Kurio’s, except that it’s food-grade which means it’s guaranteed to be non-toxic. It also means the nabi 2 shouldn’t be damaged even if kids drop it onto concrete. Our review unit has been heavily used for the last 18 months and still looks pristine, despite many, many drops. It’s one tough tablet.

There’s 8GB of internal storage (with around 4.5GB free for apps and other content) but you can insert a microSD card to add up to 32GB more. There’s no way to install apps on an SD card (that we know of) but the extra space is useful for storing space-hogging videos, music and photos.

The nabi has both micro USB and mini HDMI ports, but charges via a proprietary USB cable – you can’t charge it via micro USB. The good news is that the USB cable means you can charge the nabi 2 in your car: all you need to buy is an inexpensive USB car charger that plugs into your cigarette lighter socket – make sure you buy one that produces 5V at 2A, though.

There’s a front-facing 2Mp camera which can be used for Skype video chats as well as self potraits (but the quality is pretty dismal), and a pair of loud-ish speakers on the rear. See also: Vtech Innotab 3S review

The 7in screen is the only real weakness. It has a 1024×600 resolution, which is a step down from the 2013 Kindle Fire HD (1280×800). In practice, the resolution is high enough except when browsing the web where it feels too cramped. The other problem is that it isn’t an IPS LCD panel: viewing angles are very poor when the tablet is held in landscape mode. However, none of our kid testers has ever complained about this.

Fuhu boasts on the box that the nabi 2 comes with £120 of software. There are plenty of pre-loaded games (including learning games) to keep kids amused for hours. Too many, though, are ‘lite’ or ‘starter’ versions which nag you to upgrade, including the painting program, which should be a mainstay of any kid’s tablet. However, thanks to the recent addition of the Google Play store, which is full of decent free apps, this really isn’t a problem any more.

As well as the full versions of Angry Birds and Fruit Ninja HD, you also get eight games optimised for the Tegra graphics chip, which are sure to appeal to slightly older kids. The bundled music and MeeGenius audio books app were two of our six-year-old tester’s favourites.

There’s also a Chore List app, to which you can pick from a set of pre-defined chores, or add your own, along with a voice recording (allowing kids who can’t read to find out what each chore is). In the Mommy / Daddy mode you can edit which days each chore must be done – the only limitation is that a chore can’t happen more than once per day. It’s a good motivator for kids since that they earn nabi coins (which you buy from the nabi store) for completing a chore and can use these in the companion Treasure Box app to buy apps, books or anything else they fancy. We’d like to see a few coins included so you can use Chore List out of the box, as it can be a little confusing until you understand how it works. Treasure box also includes some free apps, and apps are occasionally on sale, so kids can learn how best to spend their ‘money’.

Yet more apps include Spinlets+ Music and Spinlets+ TV. Music is like a mini iTunes for kids, where they can download individual tracks or albums, while TV is a streaming service with around 700 hours of kids TV shows. We’d like to see more shows from the likes of Channel 5’s Milkshake, Cbeebies and CBBC, but you can access all of those via the web browser anyway, with a narrower selection through the videos ‘app’.

Now, of course, you can install the official BBC iPlayer, ITV Player, 4oD and Demand 5 via Google Play, as well as using the YouTube app. If you want to buy TV shows or movies, simply head to the Play Movies & TV app. Sorted.

On the fourth home screen is Fooz Kids, which includes a set of educational games, plus curated web links to websites, videos and crafts. During testing we found a few of the craft links were broken, but were impressed at how quickly the nabi’s support team were able to update these.

Through the Fooz Kids website, or the Parental Dashboard on the nabi 2 itself, you can manage exactly what is and isn’t available. You can do the same with apps and games. There’s no way to set a time limit as you can with the Freetime mode on the Kindle Fire HD, though.

Fooz Kids is unmistakably American, and the promise of it being Anglicised has been broken. For those in the UK it would be far better for it to refer to Key Stages rather than Kindergarten, grades and ‘math’ (and you’ll also have to put up with Mommy and other US spellings).

The exercises themselves are ok for older kids, but you’ll have to supervise younger ones (4-7 ish) as they may not be able to read nor understand the questions as they’re displayed on screen, but not read out. We liked how the games were displayed like the levels in Angry Birds and other games, and that the score was presented by up to three stars – a reward system even younger children understand.

An example of a math questions for 5-year-olds is: “Represent 6 in a different way” with the correct answer being 4+2 (from multiple choice answers). We’d rather have seen: “Which two numbers add up to 6”, and had questions read out so we didn’t have to read them instead for our 5-year-old tester. We also noticed that the questions within a level would vary wildly in their difficulty, which is another point we hope will be addressed. 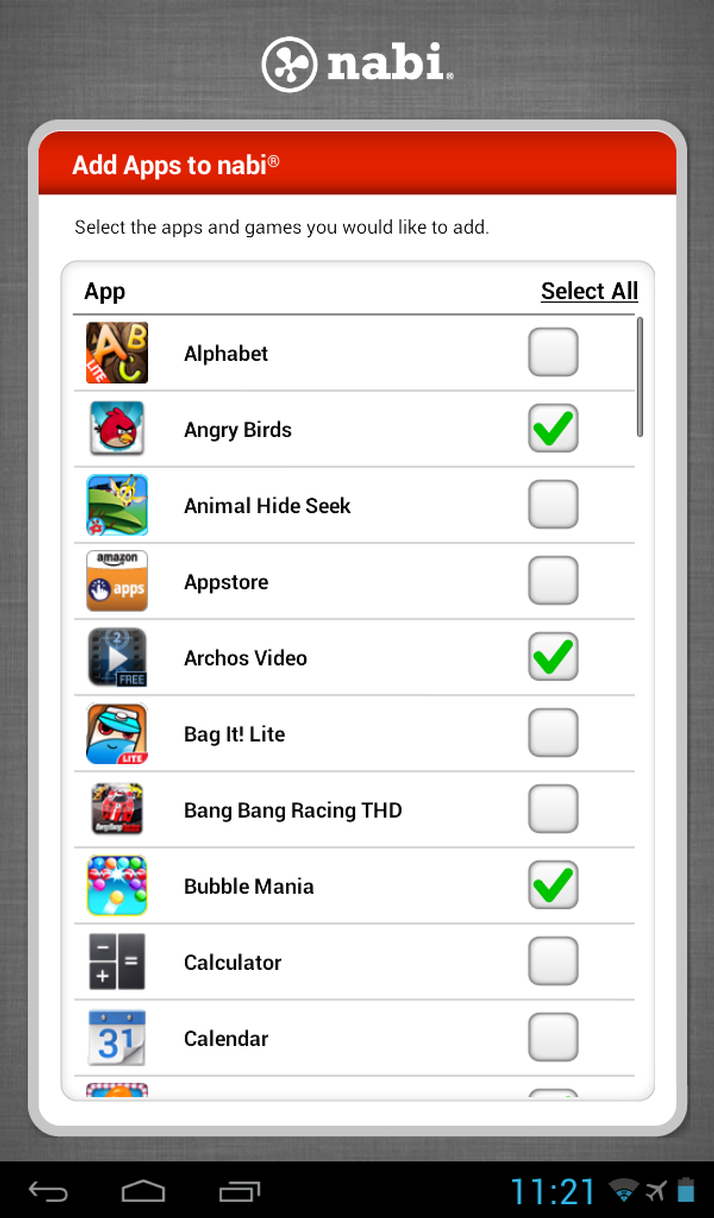 We weren’t too impressed with some the reading games for this age group, either. They were more of a memory test rather than a reading tutor since questions are asked about a story shown at the start, which then disappears off screen. Again, they’re better for older kids.

One other issue we found was in the videos app: tapping the button on the BBC’s website to play a video full-screen resulted in a message saying ‘Do not use full-screen mode’ and left the audio playing in the background. We then couldn’t stop it and watch the video again in a small window.

In general, however, the nabi mode interface is well designed for kids, who will quickly become inseparable from their nabi 2.

It’s simple to add or remove apps from the nabi mode using the ‘Add apps’ app in Mommy mode. The tricky part is that they don’t get added to the nabi mode home screens automatically – you have to tap the apps icon (the six white boxes in the top-right corner) and then drag the app you want to a home screen.

The nabi 2 comes with the Maxthon web browser. This provides a white-list of websites kids can visit, to which you can add sites when you enter a parent’s password. This means you’re in full control over the content your children see.

The browser is reasonably quick, and could handle Flash-based websites and videos, but bear in mind that many Flash games require a keyboard, so can’t be used since the on-screen keyboard would use up most of the screen. We’d have no issues leaving a child unsupervised using the nabi 2 in nabi mode.

More apps and games can be bought through the App Zone store, which has a fairly limited choice. It’s relatively easy to add Amazon’s Appstore, but not Google Play.

You get 2GB of free online storage with nabi Cloud. You can upload music, videos and photos to the service, which are then automatically downloaded to the nabi 2. It’s also possible to sync camera photos, downloaded apps and more from the nabi 2 to your computer when you install the Sync software.

The nabi 2 has a strange-looking rear panel, but the 15 squares are for the so-called Kinabis – letters and other characters that kids can attach to personalise their tablet. Currently, you can buy the alphabet for £25, but this lacks the duplicate letters needed to make up many names.

In terms of performance, the nabi 2 is great. It’s fast for playing games and browsing websites.In the SunSpider Javascript test, it scored 1678ms, similar to the original Nexus 7. It outperformed that tablet in Geekbench, managing 1551 against 1452. Graphics performance was reasonable at 16fps, a couple of frames per second slower than the Nexus 7.

The nabi 2’s battery life is also a highlight, It lasted just over eight hours in our video-looping test at full brightness, although you’ll typically see less than this with more general use – especially playing the Tegra-optimised games. The tablet took about three hours to recharge – but that’s with it turned off. Our top tip if you decide to buy one is to leave the tablet in Aeroplane mode as much as you can. This helps to retain charge when it isn’t being used. Leaving Wi-Fi and / or Bluetooth on drains the battery in a couple of days.

Apart from the screen’s viewing angles and the fact that it doesn’t charge via microUSB, we’ve no complaints about the hardware. The US-centric software remains so after 18 months, so we’re not holding out any hope of a UK update.

What’s great is that you can get all the apps you need from the Google Play Store, giving it an advantage over the cheaper Kindle Fire HD (2013). And since the bumper is included in the price, and it’s cheap to add storage, it’s arguably just as good value even though it costs more.

As it stands, the nabi 2 is one the best kid’s tablet we’ve seen.