The Jabra Solemate offers a big sound in a small packet (for a reasonably large price). The Bluetooth speaker is small enough to fit in a laptop bag, but can easily fill a room with sound. And it is built to last. 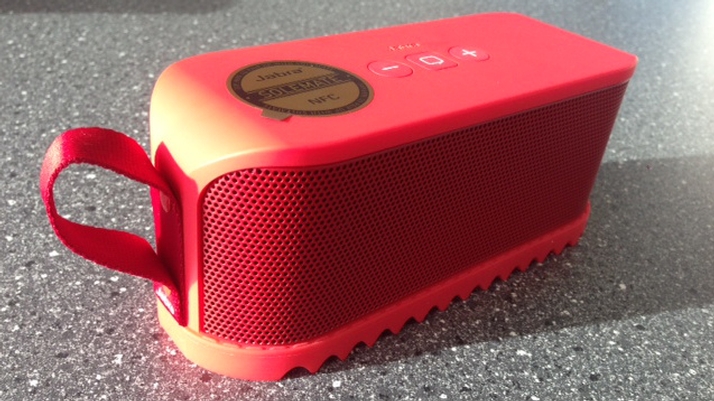 The Jabra Solemate HFS200 is a portable Bluetooth speaker for use with laptop, tablet, phone and digital music player. The Solemate has 2 tweeters and a subwoofer. With equalisation it produces a surprisingly big-and-bassy sound for such a small device, especially over Bluetooth. But this is not a cheap option and the stylings may put off as many people as they attract.

We reviewed the second-generation Solemate that comes in new colours – the original was available only in white and black. It also has a new NFC feature: more below. See also Group test: What’s the best portable Bluetooth speaker?

You won’t be able to mistake the Solemate for a boring device. At 172x64x70mm, the Solemate is small enough to fit in a laptop bag or large purse. It weighs just 610 grams and has a solid heft to it, feeling neither flimsy nor cheap. And it is designed to look like, er, a shoe. Yes, you read that right. That’s the genesis of the ‘sole’-mate pun.

You can get the Jabra Solemate in black, white, grey, blue, yellow or -as we tested – red. The bottom of the speaker is made to look like the sole of the shoe with textured, gripping rubber. This has some practical applications: it limits speaker vibration and makes the Jabra stable on all but the most wonky floors. But the rubber does picks up dirt, hair and dust easily. To solve this the Solemate comes with a small pouch designed to protect the speaker from light water and dirt, through which you can play audio. 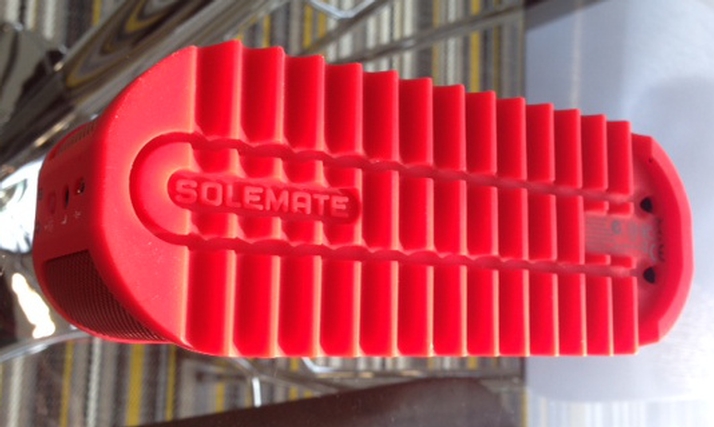 Tucked neatly in the bottom of the Solemate’s sole is a 3.5-millimeter audio cable for use connecting devices to the speaker as an alternative to Bluetooth. This is a nice touch as it reduces battery drain on your phone or tablet, and may even improve the audio fidelity. There’s a 3.5-mm audio jack on the side of the unit for this purpose.

Overall the Solemate feels very well built. We’d wager that it would live up to the most rigorous of audio lifestyles. In terms of design beauty is in the eye of the beholder, but the Solemate is certainly striking.

Connecting the Solemate to a  smartphone or tablet is an easy process. Once paired we found that the speaker will auto-connect to your devices once Bluetooth is enabled on them. The Solemate gives an audible alert when it’s connected. It will also announce how much battery is left when the call button on top is pressed. All useful functionality. And the Solemate now has NFC to facilitate easier pairing.

Out of the box, the Jabra Solemate comes with a full charge and can, according to the company, stream music for up to 10 hours. After four to five hours of music streaming in our tests, the battery level was at medium in line with the Jabra’s claim. This is a very good performance, likely to suit most usage scenarios.

Underneath the audio jack you’ll find a micro-USB port for power charging. The device can be charged using the included wall charger, which would take about two-and-a-half hours, or by a PC with the included cable. This would take longer, naturally (although it means you can charge from a laptop as you play music from it).

For its size the Solemate speaker produces enough sound to fill a large room. At high volumes the treble sounds a bit tinny, but this can be corrected with equalization settings on your phone or tablet. Audio distortion occurred only at the highest volume.

Once plugged into a computer via USB the Solemate can be used as an external speaker and microphone. After a quick tweak in the OS the speaker worked without a problem in our tests.

The Solemate can also be used as a speakerphone. One of the buttons on the top of the unit lets users answer, hang up and redial phone calls, while the other two buttons control the volume. The audio quality was good and callers on the other end of the line reported that the audio sounded similar to being on regular speakerphone. In what circumstances this feature will be useful to you, we’re not sure! See all speaker reviews. 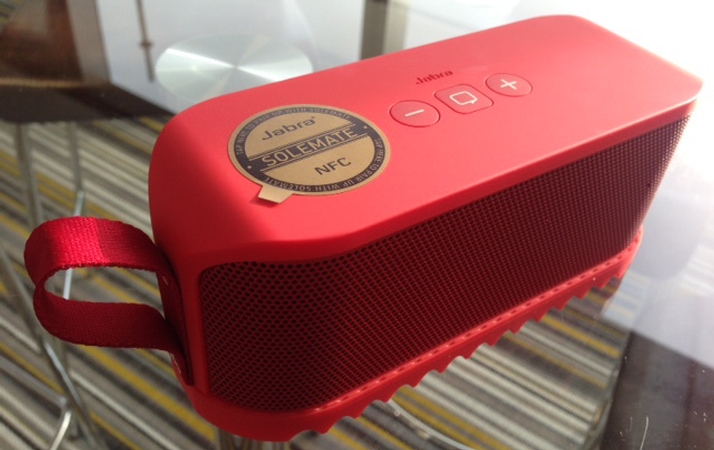 The Jabra Solemate is on sale now at Currys and other high-street stores, as well as online. The SRP at launch over a year ago was £149, but shop around and you can find it for around £65. At that price we’d say it is a bargain for those that need a robust portable speaker.