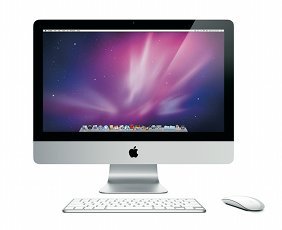 For close-up daily work, we found the size and resolution of this 21.5in full-HD screen to be a comfortable fit. Designers and those looking for large-screen entertainment are better served by the 27in iMac. Formidable attention to detail in design and construction puts the iMac clear of any imitators, while overall performance is plenty fast providing you don’t plan to try much gaming.

The Apple iMac is the all-in-one computer and screen that’s spawned many imitators in the Windows world. We put the entry-level Apple iMac 21.5in (Mid 2010) through its paces

In this year’s refresh, the quintessential all-in-one PC is once again available in two models. Last month we reviewed the larger iMac with 27in display, and in its configured-to-order guise had performance to see off most of the Windows-only competition in our Top 5 group test.

In respect of its design and features, the Apple iMac 21.5in (Mid 2010) is almost same highly specified PC, with a fabulous high-definition IPS screen that drips colour. But where the 27in had 2560×1440 pixel resolution, equivalent to four 720 high-defintion panels combined together, the baby Mac has ‘only’ full-HD 1920×1080 resolution.

Included with the Apple iMac 21.5in (Mid 2010) are Bluetooth keyboard and a Magic Mouse with its touch-sensitive top surface. Webcam and mic are effectively hidden in the screen bezel.

Around the back of the flawless aluminium frame are a row of connection ports. Four USB 2.0 are joined by a high-speed FireWire 800 and gigabit ethernet. There’s a Mini DisplayPort again, although this time it only provides a video output to a second monitor rather than doubling as an input to turn the screen into a nearby notebook’s second display.

In our graphics benchmarks it still managed a nippy 78fps in the older FEAR test, but newer games stretched it too far. Crysis at low settings was playable at 35fps; up the detail to Very High and 1680 resolution, and gameplay crawls at 10fps.

Four gigabyte of 1333MHz RAM is included, expandable to a giddy 16GB over four slots. The Intel Core i3-540 is a dual-core processor with Hyper Threading but no Turbo mode to lift its clock beyond the standard 3.06GHz. Nevertheless, a WorldBench real-world score of 119 points establishes the Apple iMac 21.5in (Mid 2010)’s credentials for up-to-date alacrity.