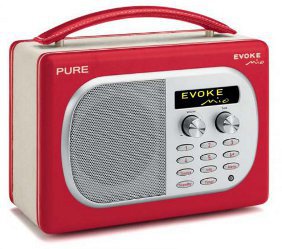 If you have a little extra cash to spend and don’t need a radio that you can plug an iPod into, then the Pure Evoke Mio might just be the digital radio for you.

The Pure Evoke Mio is a gorgeous little digital radio with decent audio quality, but the price point is a bit of a let down.

The Evoke Mio has an unobtrusive, neo-retro design; it looks a little bit like a funky suitcase or a fasionista’s lunch box. It feels sturdily built, and it has a bit of heft to it. It has a carry handle on top, so you can carry it around the home or take it outdoors. It also has an FM tuner and an auxiliary input that lets you connect an external audio source, such as an MP3 player. The front of the Evoke Mio is not overcrowded with too many buttons and labels.

Things are kept neat and simple with a volume knob that doubles as a mute button, while next to it sits a tuner knob that is also used for menu navigation. Below the tuner you will find buttons numbered one to six used for station presets (up to 30 are available). You get the usual menu, source, info and standby buttons, and the radio also comes with a timer button, which can be handy while you’re cooking in the kitchen.

A two-line, yellow-on-black OLED screen displays information about stations, the time, which mode you are in and various other information related to the current mode. A nifty feature is the light sensor, which adjusts the brightness of the display depending on ambient lighting.

Navigating through the menu is simple. Menu options are straightforward and there is no lag when scrolling through stations or changing the volume or other settings. Switching stations takes a little longer than we’d hoped, but it’s not especially bothersome.

A full-range 3in speaker is located to the left of the controls and the screen, but unfortunately it doesn’t deliver the best quality we’ve heard from a Pure product to date. Audio is muddy and can lack definition when playing music from an MP3 player, but digital radio sounds a lot better. The digital radio reception was crystal clear in our tests. Annoyingly, you can’t adjust the treble and bass on the radio, but the default settings are optimal for DAB.

We were pleased with the Pure Evoke Mio’s performance. The design is attractive and has a nostalgic, retro look with a touch of modern flair. The price is a bit high in our opinion, especially when you compare it to cheaper, feature-packed digital radios like the Pure One Elite or the Kogan Wi-Fi Digital Radio DAB With iPhone Docking Station Deluxe. However, those two radios don’t look as nice.

Pure has released a special edition Evoke Mio with a patriotic Union Jack finish in celebration of the Queen’s Jubilee. It’s identical to the standard Evoke Mio in every other respect. This special edition is no more expensive at £150, but note that like the regular Mio, it doesn’t come with the E1 battery pack. This is claimed to last around 24 hours of playback between charges and costs £35. 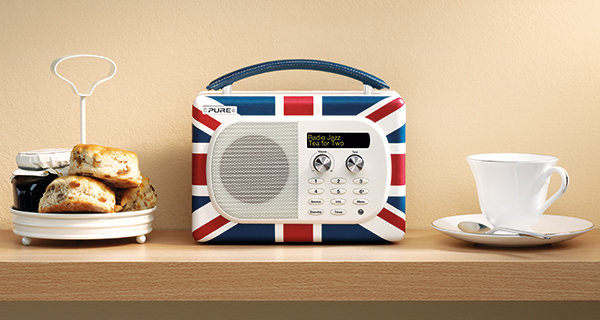