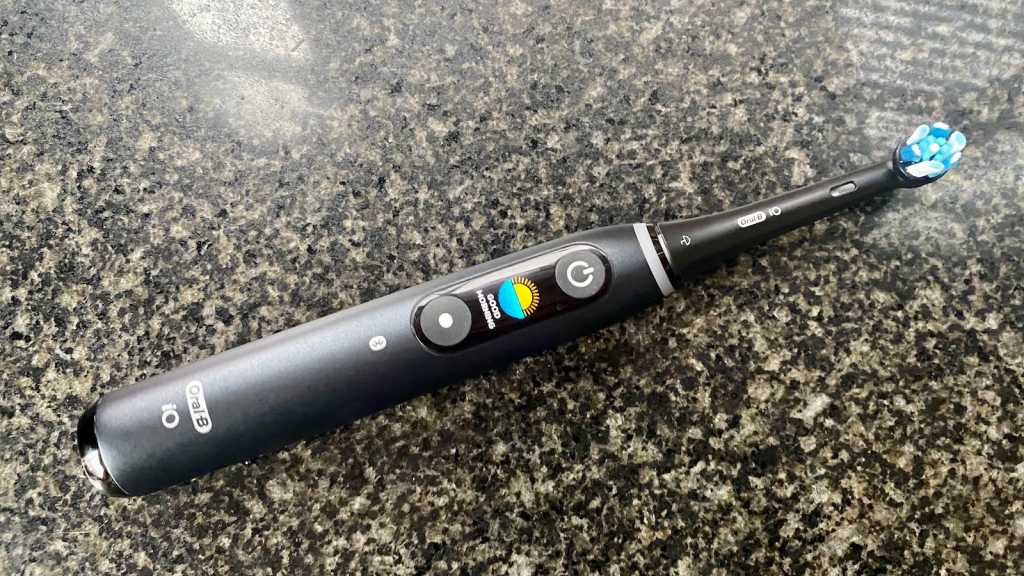 The iO8 is a fantastic smart brush with a ton of great features. We wish it had USB charging and a slightly better battery life but it’s still one of the best brushes you can buy. It’s a luxury item but if your budget stretches that far, we don’t think you’ll be disappointed.

With the iO line, Oral-B has delivered a series of completely redesigned electric toothbrushes, with a modern, ergonomic look, improved brushing performance and a whole host of new features. Depending on where you are in the world, there are up to eight different iO brushes available, at different price points and with different features.

If you’re in the market for a new Oral-B brush, the chances are that there’s an iO to suit you. Read this review to find out if the iO8 is the one for you.

The iO8 is one of the high-end iO models, third only to the iO9 and the iO10. As such, it has all the key features of the top models, including three-hour fast charging and a full-colour OLED screen.

It comes in three colour options: violet, white and black. But remember that, as Oral-B only makes black or white toothbrush heads, if you opt for violet you’ll have a dual-colour brush. In this review, we’re looking at the black model.

You can personalise your brush further by choosing from one of ten bright colours for the light ring around its neck. The light ring will glow in your chosen colour when you begin brushing. It’ll then switch to green when you manage the ideal amount of pressure and glow red if you’re pressing too hard. It’s a nice form of visual feedback that you’ll be able to see in the mirror and your peripheral vision.

The iO8 has a full-colour OLED screen. Pick up the brush and you’ll be greeted with a sunshine icon, a winky or a smiley face and a hello. Fortunately, these salutations are onscreen only – the day ChatGPT arrives on electric toothbrushes is the day I start brushing my teeth with a twig.

The screen has more practical functions as well. One of the best is that the remaining battery life is clearly displayed every time you finish brushing. Still, as it’s shown in increments of 10%, by the time you are down to the last tenth, it’s hard to judge if you have one more brush left or if it’ll die on you then and there.

You can also choose your brushing mode and scroll through settings and, once you start brushing, the screen will display a timer. Although I initially felt the screen was an over-the-top add-on, the timer is now is one of my favourite features. If I’m using another brush, I’ll instinctively look down for it.

I’ve found that it encourages me to brush for longer as well, as if I zone out or feel as though I’ve been brushing forever, seeing that I’ve only got 30 seconds left spurs me on to complete it.

There’s a second timer in the form of brush vibrations, which alert you every 30 seconds to move on to the next section of your mouth, and a longer alert when you hit the two-minute dentist-recommended brushing time. You can also open up the app and using the brushing feedback timer there.

All in all, it’s a surprise that with the launch of the iO10, Oral-B added yet another timer to the mix – in the form of a light display on its charger. To find out more, have a look at our review of the iO10.

Buy the iO8 and in the box, you’ll get a magnetic charging puck, a travel case, the brush handle and two brush heads. The case is a handy addition but it’s not as sharply designed as the one that comes with the competing luxury brush, the Sonicare DiamondClean 9000.

Buy in the US and the charging puck has a standard two-pin plug. Buy in the UK and you’ll get a shaver socket plug. This is true of all Oral-B brushes and it’s my main bugbear with the brand. For brushes at this price point, we’d love to see USB charging.

The iO8, like the other pricier iO models (from iO6 and up), has three-hour fast charging via the magnetic puck. This is a great feature when compared to the standard 12-hour Oral-B charge, although if you’re used to fast phone charging, it’ll still seem like a long time.

One slight issue here is that it’s very easy to knock the brush off the puck while charging, so make sure it’s in a stable, out-of-the-way spot.

The difference is huge. The iO brushing performance is second to none – and I don’t know anyone who’s tried it who thinks otherwise.

The iO8 has six brushing modes: daily clean, sensitive, whiten, gum care, intense and super sensitive. It’s one less than the iO9 and one more than the iO7 – exactly as you’d expect. I didn’t find the differences between the modes as pronounced as some other brushes but I think there’s enough variety to find a mode that’s right for you.

The iO8’s battery will last for a maximum of two weeks. In practice, I found it never lasted quite that long but its clear battery display and fast charging did mitigate that for me.

The iO8 can be used as a shared brush, although it won’t keep track of your individual brushing record on the app. Oral-B confirmed via a Tweet that although two users with separate phones may be able to use all the app’s features individually thanks to the Bluetooth connection (ie as long as the user’s phone is within range and the other’s is not), that’s not the way the iO was designed.

If more than one person is using the same brush, it also means that the brush head replacement reminder in the app won’t work properly.

However, if you’re willing to forgo some of the smart features, the iO8 can still be used as a shared brush. It’s easy to change the brushing mode on the handle if you prefer different modes, and iO heads are marked with small symbols to differentiate them.

The iO8 connects via Bluetooth to the free Oral-B app, available for Apple and Android. In our test, I found it easy to use and quick to connect. The main reason to use the app is for the interactive brushing feedback. Watch your phone screen while you brush and it’ll track the coverage as you go.

The iO’s real-time brushing feedback is about as good as it gets. In my experience it generally worked well, except I found that, in order to get a perfect result, I was brushing for longer than the recommended two minutes. This affects battery life and who know – it may be causing me to over brush.

One of the reasons you’d pay more for the iO9 and iO10 is their 3D surface AI brushing tracking but I don’t think it’s that much better than the real-time help the iO8 provides. None of them give perfect feedback but if you need some structure to get your brushing back on track, they may help.

Apart from that, the app allows you to adjust brush settings, set brushing goals, go on “dental care journeys” (perhaps to improve your gum health), see past brushing performance, collect badges and get reminders to replace your brush head.

As much as brands are trying to sell us on connected features, most don’t yet add enough to keep the average user coming back. Unless you really need a strict regime of brushing help, my guess is that you’ll abandon the majority of the smart features pretty quickly.

The Oral-B iO8’s price point varies depending on where you’re based.

In the US, it’s widely available direct from Oral-B, and from other retailers like Target and Best Buy for around $249.99.

In the UK, the iO8 had a launch price of £450, which we thought was wildly overpriced. However, during regular sales periods, it would drop to its current price.

At the time of writing, it’s widely available for £170, from sites including Boots, Oral-B and Currys. We don’t think you should pay more than this. It’s still not a bargain price but this is a luxury item that’s crammed with state-of-the-art features and we think it’s worth it.

We think the iO8 is one of the best electric toothbrushes around. It has all the elements you need to take good care of your teeth – a visible pressure sensor, detailed timer, choice of brushing modes and top-notch brushing performance – as well as some nice-to-have features, like fast charging and a clear battery display. In an ideal world, we’d love to see longer battery life, USB charging and a more robust charging stand as well. But overall, this is a well-made brush with lots of extras and it’s a pleasure to use.