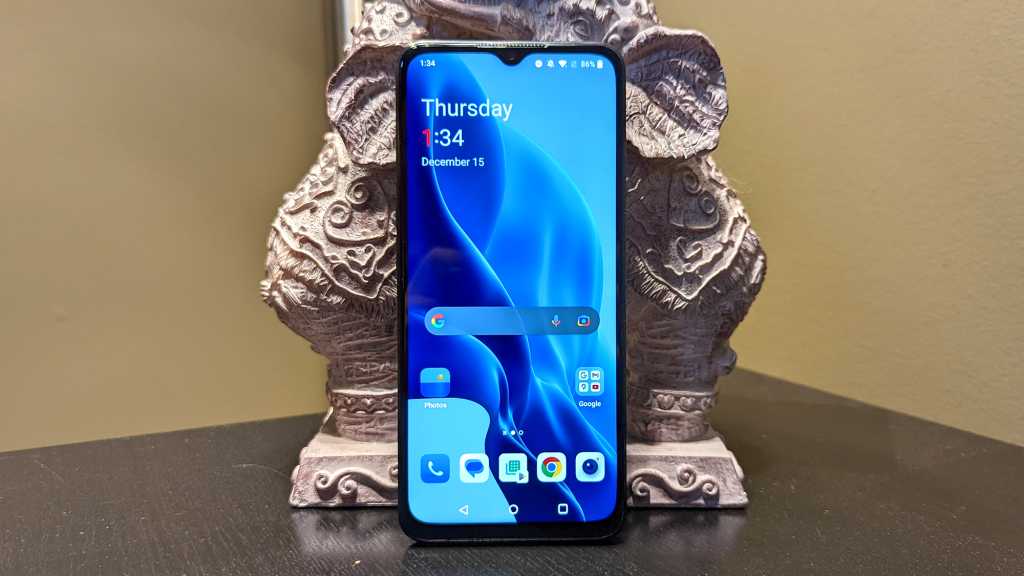 The OnePlus Nord N300 5G is a decent budget phone that is good value for money but has a couple of quirks.

OnePlus’ Nord lineup has been growing strong since its introduction in 2020 with good mid-range phones like the Nord N20 5G but now it continues to expand into budget-friendly territory in the US with the Nord N300 5G.

With a MediaTek chipset, simple design and affordable price, does the N300 do enough to tempt you into buying it?

As you’ll see, I think it’s a mixed bag.

Like its Nord N20 sibling, the Nord N300 has a fairly slim profile that is relatively easy to hold in one hand. The slight matt texture of the back of the phone also helps to securely hold it in one hand.

Despite weighing a little heavy on the phone scales at 190g, the Nord N300 doesn’t feel too heavy and is fairly well-balanced. This can also be attributed to the plastic frame and plastic back of the phone, which feels good and doesn’t scream budget phone.

The phone is only available in a Midnight Jade colourway, which is a fancy way of saying it’s black. It would have been nice to see a second colour option available such as blue as we’ve seen on OnePlus phones before.

The back of the phone has a small camera bump that is barely noticeable but there is a very slight wobble when putting the phone down on a flat surface because of it.

The Nord N300 5G has a 6.56-inch LCD HD+ display. Thankfully, OnePlus decided to go with a 90Hz refresh rate that makes navigating the phone much smoother.

The display itself looks good but nothing to be blown away by. Some colours and blacks on the screen don’t pop as much as on a phone with an AMOLED display.

Similar to other Nord models, the vibrations and haptics aren’t the best in the Nord N300 5G. They could be much stronger but they get the job done for the most part.

The phone also features dual speakers which sound fine, but aren’t as full bodied or well rounded as those on more expensive flagship Android phones.

Powering the Nord N300 5G is the MediaTek Dimensity 810 chip, which has an 8-core CPU and a Mali-G57 MU2 GPU. The phone has 4GB of RAM which seems like the bare minimum in Android phones these days. With the slight laggy nature of the N300, it sort of shows.

Overall, the Dimensity 810 chip gets the job in most cases but there were a few occasions where an app took some time to open such as the Google Play Store.

The Nord N300 5G also marks OnePlus’ first phone to launch in the US with a MediaTek chip inside. The company has previously launched phones in India that were powered by MediaTek chips, and the Nord 2T in Europe and the UK.

The Dimensity 810 chip not only brings 5G support but there’s also Bluetooth 5.3 and Wi-Fi 5.

The main lens was able to capture some good photos. In most cases these photos would be perfectly acceptable to anyone thinking of buying this phone.

This does come with a caveat, in that the Nord N300 5G’s main cameras only perform well in well-lit conditions where there’s lots of light.

If you’re shooting in low light, you can take some decent photos but nothing that’ll blow your mind. Shots can be grainy with a lot of noise where detail is lacking.

The camera app does feature a dedicated Night mode but it can be a bit slow and take a few seconds to capture a photo.

For video, the Nord N300 5G can shoot up to 1080p video at 30fps. The quality of the videos shot is good if slightly undersaturated.

On the front, there’s a 16Mp selfie camera but it’s outright bad. Even in good lighting conditions or during the day with lots of ambient light, selfies look very blown out.

Battery life shouldn’t be an issue as the Nord N300 5G features a massive 5,000mAh battery that easily lasts all day.

If you do find yourself needing to top up, the Nord N300 5G comes with a 33W SUPERVOOC fast charger in the box. This is decent, but not as fast as many other more expensive Android phones.

On the software side, the Nord N300 5G is running Android 12 with Oxygen 12 on top. In years past, OxygenOS has changed visually to a look that mimics Samsung’s OneUI in many ways.

With OxygenOS 12, the user interface (UI) has a bit of Samsung flavour but also some touches of Oppo’s ColorOS. This is no accident, as Oppo and OnePlus are owned by the same company, BBK Group, and share a codebase for their software.

OxygenOS 12 brings a slightly refreshed design language with more bold text and new icons. There’s also a customisable dark mode that lets you adjust the shade of black or grey throughout the UI.

Other features of OxygenOS 12 include an improved Zen mode that helps you scale back distracting app use, a similar Work Life Balance mode and new always-on display options for the lockscreen.

For software updates, the Nord N300 5G will only be getting one software update (most likely to OxygenOS 13/Android 13). This software policy is far below the likes of other budget Android phones like Samsung’s Galaxy A series which get at least three years of Android updates.

OnePlus hasn’t announced when a OxygenOS 13/Android 13 update will arrive to the Nord N300 5G but it looks like it’ll be sometime in 2023.

The OnePlus Nord N300 is only available in the US via the American courier T-Mobile and its pre-paid subsidiary, Metro by T-Mobile.

The phone costs $229 USD when buying it outright or in some cases as low as $0 depending on T-Mobile’s deals.

The phone is not available in the UK.

Overall, the OnePlus Nord N300 5G is a decent budget phone for a few reasons.

First, it doesn’t feel like a cheap phone, the build quality of the phone makes it feel like a more expensive phone.

Second, is that it has great battery life that easily lasts a single day or more and can be charged fairly quickly.

There are a few negatives to the Nord N300 5G like the weak vibration motor and haptics and only one future Android update but overall there aren’t many better options at this price in the US phone market.