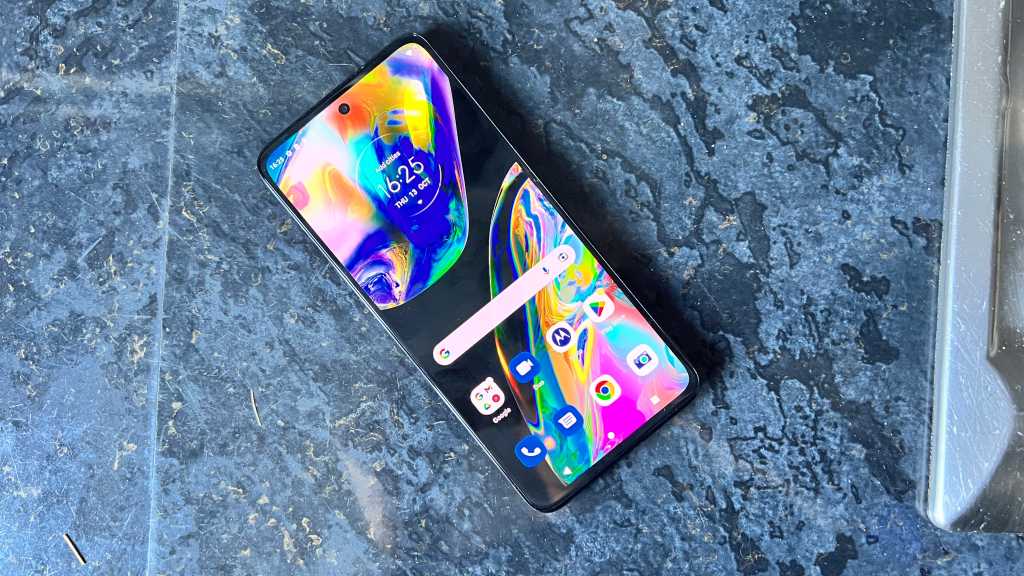 Motorola’s Moto G82 5G has a big, beautiful screen, and impressive audio compared to many other phones in the middle of the pack price range-wise. It looks great, too, but if you’re picking it up you’ll need to ensure you won’t need more power – it’s no powerhouse.

Motorola’s G lineup has long been a solid pick for any budget-conscious phone buyer – the manufacturer has a reputable name, the phones have always been solid (if unspectacular), and as the trickle-down of phone tech from flagship devices continues, Motorola has been quick to improve its devices.

The G82 5G looks more expensive than it is, thanks to its impressive OLED screen and 50MP camera. Corners have been cut to reach that mid-range price point, though, but it handily beats out the prior Moto G22 while still offering a 5G option for those that can take advantage of it.

As mentioned above, the Moto G82 5G continues the Motorola streak of good-looking phones that don’t cost the earth.

The front is an almost all-screen design, with black bezels that are pretty trim and taper nicely around the corners, and the front camera is tucked into a “hole-punch” positioned centrally under the top of the display. Each end offers a speaker for stereo playback, while there’s a headphone jack at the bottom if you’re yearning for those halcyon days – alongside a USB-C port for charging.

On the right-hand side, there’s a volume rocker and sleep/wake button with a fingerprint scanner that can call Google Assistant with a quick double-press, and a SIM tray slot on the left.

Our review unit is the catchily titled Meteorite Gray, and even though it’s plastic it looks great from a distance. Sadly, when you get a little closer it’s clear that the Moto G82 5G is an absolute fingerprint magnet, unlike the G22’s matte finish. Motorola must have realised this, though, because they’ve popped a transparent case in the box, too.

The camera setup on the back puts the three sensors in a vertical formation, with a standard, wide, and macro option.

Many cheaper phones eschew a higher resolution screen in favour of a cheaper panel, but Motorola has gone with a full HD OLED option.

We tested the panel with some action-filled video game and movie trailers, and all looked great, even in darker scenes. Colour accuracy is good, and the display avoids oversaturating colours as we’ve seen from plenty of mid-range OLED options before.

Another pleasant surprise is the inclusion of a stereo speaker system. It’s not great when it comes to picking out small audio details, but it does get impressively loud – think of it as a great podcast-listening device, although you’ll probably want to plump for Bluetooth headphones for your music. That said, there is always that aforementioned headphone jack.

While we were impressed by the screen, we almost wish Motorola had gone for a lower refresh rate and paid more attention to the lack of power on the G82 5G. The phone falls into a similar trap to other 5G handsets where it’s so focused on providing that superfast connection that more general performance in other areas tends to suffer.

It’s perfectly capable of handling standard fare like Google apps, flicking through the Play Store, and using social media, but ask any more of it and it’ll struggle a tad. We tried to run League of Legends: Wild Rift, and it struggled to keep a consistent framerate, often dropping the ball almost entirely with more than a few players online. Legends of Runeterra, a good-looking but fairly slow (at least by comparison) card game saw plenty of stutter on lower settings, too. In summary, a gaming phone the G82 5G is not.

Still, when moving files through Google Drive, uploading attachments to emails, and performing other less-than-exciting tasks, it performs much, much better than the G22. The 128GB of onboard storage is nice, too, especially with support for a 1TB microSD, too.

The Moto G82 5G comes with a trio of lens options on the back, headlined by a solid, if unspectacular, 50MP wide lens. In everyday conditions, particularly outside, it’s good, if a little too quick to oversaturate colours. It does tend to struggle with sharper detail, though – check out the bottle of bubbles, with a lack of clarity around the meniscus. The same can be said of the Ultra Wide option, too.

In low light, such as with the figure of Ryu, it struggles with shadows but actually tends to even out its tendencies to oversaturate, leading to some almost natural vignette effects.

There’s not a great deal to be said about the Macro lens, sadly – it’s almost entirely superfluous in everything except the clearest of daylight. It just feels like a vaseline smudge across the display, and focusing is a slow process that’s not always consistent.

The front camera actually fares reasonably well in mid-light conditions, but struggles with its portrait mode. In our testing, it lopped off hair, although it was pretty good at mapping out ears and jaws.

Videos capture runs up to 60fps in HD, but you’ll only get stabilization at 30fps. It’s noticeable when it’s gone, too, because it becomes a bit of a mess unless you’re stood perfectly still.

When using the G82 5G in everyday use, we were impressed by how well it clings to a charge. We regularly hit a day and a half to two days of use, and the PCMark 3.0 battery test says it offers over 15 hours of screen-on time.

The 5000mAh battery charges via USB-C, with 30W fast charging from the included charger. That means it can hit 27% in 15 minutes, and 53% in 30 minutes. Since that 53% is essentially equivalent to a day of usage, that’s easily enough to get you by in a pinch.

Motorola runs an almost vanilla variant of Android 12, and really only adds some subtle shortcut features over the basic version. With an all-screen front, users can use gestures to move between apps or back to the home screen, but longtime Android users can also opt for the prior software “buttons”, too.

The biggest draw of the Moto shell wrapped around Android is the Peek Display function that lets you see notifications and the time just by picking the phone up. It also appears as notifications pop in, almost certainly keeping battery drain down by not turning itself on fully with every single text, email, or social media notification. Mercifully, there’s barely any preinstalled bloatware, which is great.

The Motorola G82 5G retails for £289.99 in the UK, and although it isn’t currently available in the US from Motorola directly, it is available via Amazon for $349. In the UK, it can be bought directly from Motorola as well as through third-party sellers like Amazon.

The only configuration comes with 128GB of storage and is available in Meteorite Gray or White Lily.

For more, be sure to take a look at our selection of the best mid-range phones right now.

As long as you’re not a gamer or a mobile photographer, the Motorola Moto G82 5G offers 5G connectivity in a good-looking phone with an OLED display. For many, that’ll be enough, and the battery life is a nice bonus, too.

It’s a solid workhorse and jack of all trades, and while it’s a master of none, you could argue that it doesn’t need to be at this price point.