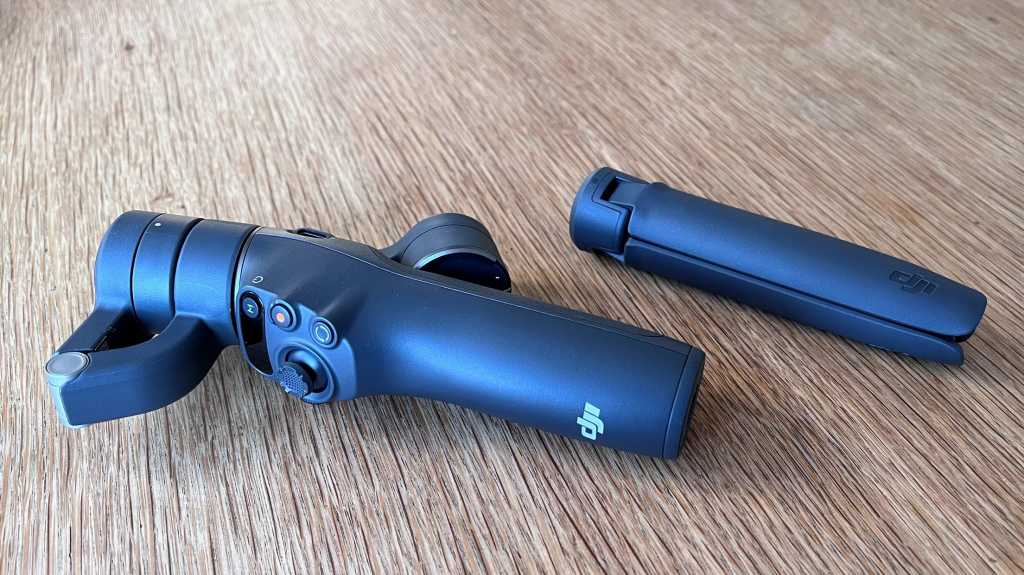 Although a little on the pricey side, the Osmo Mobile 6 is an excellent phone stabiliser that combines great hardware with easy-to-use software.

For its sixth iteration, DJI has made a couple of significant changes to its Osmo Mobile phone stabiliser.

One is the addition of a handy display to show which mode it’s in and the other is a combined dial and button on the side which can be used for zoom and focus.

The other obvious change is a return to the black of the original model, although here it’s more of a dark grey charcoal and everything is made from plastic.

It’s well made, though, and feels nice and light in your hand.

Comparisons to the original are irrelevant, of course. The real question is: in 2023, is this the phone gimbal to buy?

There’s certainly a lot to like about the Osmo Mobile 6. It’s very compact when folded up, meaning you’ll take it more places rather than leaving it at home.

There’s a soft bag included in the box, along with a mini desk tripod which allows you to use the Osmo Mobile 6 hands-free – ideal if you plan to use it to record you while you’re doing something, or want to shoot panoramic photos from precisely the same spot.

Going hand in hand with that is Active Track 5.0 which can follow a subject automatically, even if they walk behind a tree, for example.

Plus, gestures allow you to start and stop recording hands free, and this worked well during testing.

Like previous Osmo Mobiles, the ‘6 has a joystick which lets you control the gimbal manually, panning and tilting the camera while you hold it still.

But the beauty of a gimbal is that it can smooth out hand motion when you’re not holding it still. Say you rotating your wrist left, the gimbal will help to isolate your phone’s camera from that movement, but will slowly follow it – and that’s what makes your videos more cinematic.

A trigger on the opposite side to the joystick can do a few things, one being to lock the tilt when you hold it down. This is good when you’re moving around a subject as it prevents the camera from tilting up or down even if you tilt the handle.

Depending upon how many times you tap it it can also do other things, such as switching between video and photo mode and re-centering the camera. Similarly, the mode and switch buttons have various functions.

Obviously, mode toggles between the different modes (Follow, Tilt Lock, FPV and SpinShot), but a long press turns the gimbal on and off – slightly confusing until you notice the power icon around the corner from the button.

As you toggle between those four main modes, the display will show the corresponding icon so you can see which one is being used.

The switch button toggles between the front and rear cameras, but a double press rotates your phone between landscape and portrait.

The new zoom / focus wheel is also a button, and a single press switches between those modes. At the time of review there were no settings for this, meaning you can’t adjust the sensitivity (I found it was too sensitive, especially for zooming) and nor can you reverse the direction to zoom. Naturally, I would turn clockwise to zoom out, but the default is to zoom in, with anticlockwise zooming out.

When using manual focus, there’s nothing to tell you when your subject is in focus, so you’ll have to rely on your eyes and your phone screen.

As with the Osmo Mobile 5 and Osmo Mobile SE, the OM 6 supports all recent iPhone cameras, which means as you zoom through the range the Mimo app will automatically change to the appropriate camera. Android support is more limited, but you’ll find a list on DJI’s website.

The other feature owners of recent iPhones benefit from is that Mimo will automatically launch when you attach your phone to the Osmo Mobile 6 using the magnetic clamp (which is reassuringly strong, even if it does block some buttons on some phones).

Regardless of phone, the gimbal will automatically power on when you unfold it, making it quicker to get up and running.

Helpful in certain situations is the built-in telescopic pole with extends from the handle around 220mm (8.5in). This makes it much easier to shoot high up – to get a better view if you’re in a crowd, for example – or close to the ground to follow a baby, pet or something else without bending down so much.

Stabilisation performance is very good, handling modern ‘heavy’ phones without problems. DJI says it will cope with phones up to 290g, which means a 240g iPhone 14 Pro Max with a case should be fine.

The supplied clamp can hold phones up to 10mm thick and between 67 and 84mm wide.

While you can use some buttons and features of the Osmo Mobile 6 with your stock camera app (or one of your choice), you’ll only get the full experience by using DJI’s Mimo app.

It’s much like a stock camera app, and closely mimics the iPhone version. There’s a mode carousel including the expected photo and video, but there’s also Slowmotion, Timelapse and Hyperlapse. Only the first of those will be dependent upon your phone’s capabilities, with the second being a static shot taken using the tripod over a period of time, and Hyperlapse being a timelapse taken while moving around, to speed up a journey, for example.

Dyna-zoom is probably a mode you’ll use the least, as it replicates the Hitchcock-style effect of zooming in or out while moving away from or closer to your subject. This normally requires a dolly, so can be difficult to master using a handheld gimbal.

There’s also Story mode which gives you dozens of shooting templates for different styles, telling you how to shoot each shot within the story and controlling the gimbal automatically for some of them.

Android users won’t find Mimo in the Google Play Store (like DJI’s other apps). The official reason for this is unknown, but whatever it is, it’s a pain for Android users who have to get the app from DJI’s website and change the settings on their phone to allow its installation from an “unknown” source.

The Osmo Mobile 6 costs $159 / £145 direct from DJI’s website, but you can also buy it from Apple, Amazon and other retailers.

As we’ve seen before, if you want a magnetic phone clamp with a built-in LED fill light for vlogging, that’s an optional extra and costs $59 / £42.

This means the Osmo Mobile 6 is one of the more expensive phone gimbals and you can get similar levels of stabilisation from the cheaper SE model if you don’t care about the zoom wheel or the telescopic pole.

The latest SE has the same small status screen, Active Track 5.0 and ShotGuides, but costs only £95. The bad news is that it’s not available in the US. Buyers can only choose the older OM 4 SE.

For more alternatives, see our roundup of the best phone gimbals.

As DJI so often does, it has yet again improved on a previous product and made a device that is the best of its type.

The Osmo Mobile 6 certainly not the cheapest, but if you’ll use the modes it offers – both hardware and software – and want control over focus and zoom, it’s hard to think of a better option right now.

It’s a real shame the app doesn’t allow you to adjust the sensitivity, so you’ll need careful controlled rotation when zooming in particular.

The new screen is also helpful for letting you know which mode you’re in, as well as an idea of remaining battery power.

Although I haven’t mentioned it yet, the Osmo Mobile 6’s analogue joystick is also a boon, as it allows you more control over pan and tilt speed compared to the Osmo Mobile 5 which I found offered no such control: you’re either panning / tilting or you’re not.

If the price is too high and you’re not in the US, the new Osmo Mobile SE is a better value alternative at under £100.