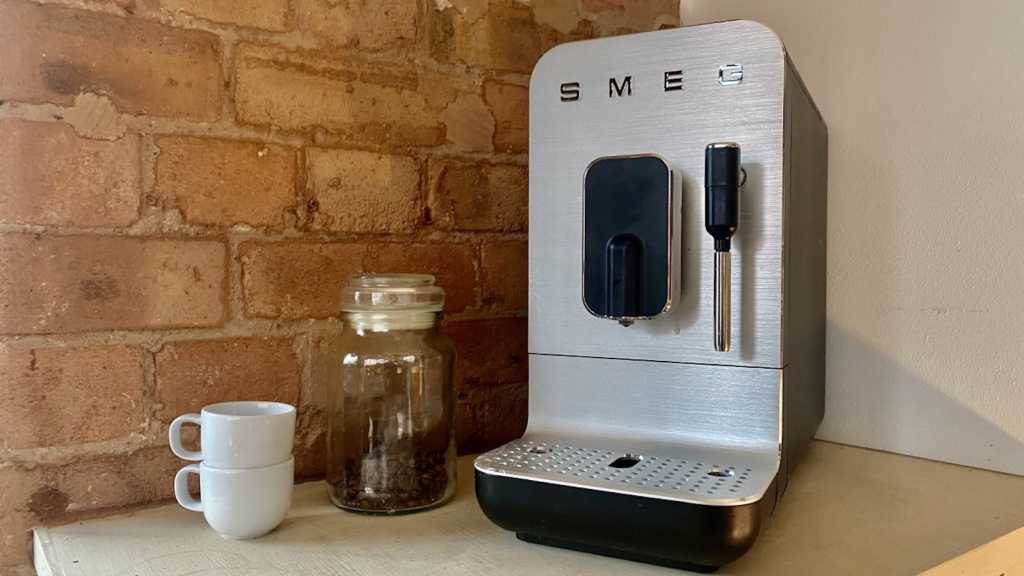 This is a lovely machine that produces great coffee. But multifunction buttons instead of a screen mean you’ll need to learn settings or keep a manual to hand.

Depending on where you are in the world, this appliance is called an automatic coffee maker or a bean-to-cup machine. But in either case, it does the same thing, making high-quality espressos, ristrettos and long coffees from whole beans. Thanks to its inbuilt milk wand, you can also make lattes and cappuccinos.

Although it’s nominally in a ‘50s style, Smeg’s bean-to-cup coffee machine is not in the shiny plastic and faux chrome of the brand’s most famous small appliances. Instead, it has a minimalist design with a brushed aluminium front panel and contrasting body, dispenser and wand.

We’re reviewing the black and aluminium model, but other colour options include taupe, emerald green, red and white. There’s also an all-black option. Colour options may vary, depending on your location.

At 18 x 33.6 x 43.3cm the bean-to-cup machine is relatively narrow but deep, so although it’ll be easy to find a spot to slot into, it’ll take up most of the depth of your kitchen counter. It fit comfortably under my kitchen cabinets, with plenty of space to add beans into the hopper from the top, although filling the water tank was a different matter.

The 1.4 litre reservoir sits inside the machine at the back. Personally, I don’t like this placement as it often means shunting the machine forwards to refill it. The Smeg machine is heavy, at 18.5lbs, which makes this a chore.

To access the water tank, you remove a panel on top and lift it out by its handle, which is a nice touch. But as the tank is almost as tall as the machine, you need a lot of clearance to remove it. I could just about do it from under the overhang of a cabinet but it’s a bit of an annoying job, so if space is at a premium in your kitchen, this may not be the machine for you.

At the front is a removable drip tray with a float, and just behind this sits the grounds drawer. As with all bean-to-cup machines, don’t forget to empty this regularly as coffee grounds behave just like food and if emptying it slips your mind, you’ll wind up with a drawer of mouldy, green discs.

The dispenser at the front can be slid up and down to accommodate anything from a tall latte cup to an espresso cup without splashing. If you need more height, you can slip out the drip tray.

The machine is strikingly attractive – easily the best-looking bean-to-cup we’ve tested – but unlike competitors from more tech-focused brands, it doesn’t feature a screen.

Instead, there’s a suitably minimalist control panel on top, comprising five buttons, as well as a power switch on the side.

There are also five indicator lights to alert you to add more beans or water, empty the grounds container, check the brewing group head and descale the machine.

The other thing you won’t find on this machine is space to warm cups on top, but it’s not something I missed while testing it.

Whether or not you’ll miss the screen probably depends on how you made your coffee before. My day-to-day coffee maker is a De’Longhi Dinamica Plus, which has a touchscreen. I missed the array of brightly lit, one-press options when I blearily approached the coffee machine in the mornings.

Instead, four of the five buttons are dual function. The fifth allows you to switch between two menus – orange and white – which are differentiated by a light ring around the buttons.

Choose the white menu and the four buttons will produce ristretto, espresso, coffee and hot water respectively. The orange menu gives you the option of light ristretto, light espresso, long coffee and steam.

It’s a simple and easy to use system, except that you need to remember which menu does which. There are no markings on the machine to indicate whether the steam button on the orange setting produces water or steam – so I had to refer to the manual a few times.

If the pre-set coffee volumes are not exactly to your taste, you can customise them by means of some button pressing. Your preferences will be saved unless you restore the factory settings.

You can also adjust the machine for your local water hardness and adjust the grinding size by means of a dial inside the bean hopper, which has five fineness settings.

Altogether, there are quite a lot of setting you can experiment with to get your perfect espresso but you’ll need to consult the manual as it’s not immediately obvious how to do it, nor very easy to remember.

The machine warms up quickly and automatically rinses out before it’s ready. As mentioned above, there’s a float in the drip tray which will let you know when it needs to be emptied, but personally, I put a cup under the dispenser when I switch the machine on to minimise mess. When it begins dispensing, a light behind the spout comes on, illuminating your coffee. It’s a useful and cool little feature.

Once you’ve made your coffee, you can froth milk to accompany it. Select the (right) button and the wand is quickly ready to use. I found the milk wand to be quicker, quieter and altogether less of a shock to the system in the morning than those on many other machines, which are noisy and sputter. It’s also very effective. Before long, I was texturing milk – if not like a pro, then at least with a reasonable level of competence.

Smeg’s bean-to-cup machine is widely available from Smeg itself and other retailers. In the US, it’s available from sites including Amazon. Look closely if you think you’re getting a bargain, however, as for around $150 less, there’s a model of the appliance that does not come with an integral milk wand (check out that version on Amazon). Still, if you won’t use the milk frother, it’s a good way to make a saving on the machine.

In the UK, you can find it from a number of sites including Smeg itself, Amazon, John Lewis and more. But at the time of writing, Currys has the best price. The milk wand free model is less widely available but you can still buy it from European sites, such as Cooking Life, if you want to make a saving.

Smeg’s small appliances are easy to love, with a countertop-enhancing presence that you’ll enjoy every time you walk into your kitchen. The bean-to-cup machine is no exception, with attractive, simple lines and a range of covetable colour options.

It’s a fairly big appliance, however, and the placement of the water tank means you need to lift it up and over to refill it. This means it’s a better bet if you have plenty of room, rather than a small space with overhanging cabinets.

It makes great coffee, but the multifunctional buttons mean that adjusting the blend isn’t intuitive and you may forget which button does what.