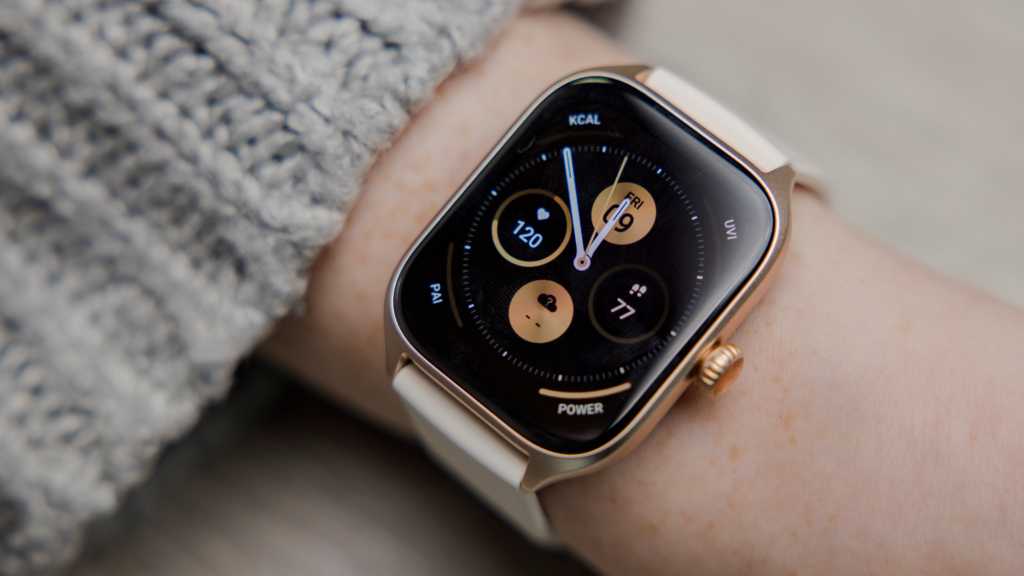 The Amazfit GTS 4 both looks and feel premium, and has a long battery life to boot, but its tracking software doesn’t quite match the standard set by rivals.

The Amazfit GTS 4 is the sister watch of the GTR 4 and comes with a stylish design that is reminiscent of the Apple Watch.

This wearable doesn’t quite have the same length battery life as the GTR 4, but it is still much more durable than some competitors. However, does its custom OS and tracking software hold up under testing? I’ve spent time with the GTS 4 monitoring my exercise, sleep schedules and vitals to find out.

The Amazfit GTS 4 comes in a choice of four colours; Infinity Black, Rosebud Pink, Misty White and Autumn Brown. The first three include a 20mm silicone strap, whilst the latter is a nylon option. All straps have a quick release feature, so can be swapped out for another of your choosing.

My review unit was the Misty White version, and it’s a stunning finish overall. The strap pairs well with the gold aluminium body, creating a premium look and feel.

The watch is feather-light at 27g and comfortable to wear, even for long periods of time. The strap can get sweaty after gruelling workout sessions, so make sure to wipe it down after use. Despite the delicate look, the watch still feels durable, and has a 5 ATM water resistant rating.

The Amazfit GTS 4 has a 1.73in AMOLED screen that is bright and clear and doesn’t pick up fingerprints. I can easily use it under sunlight without encountering glare, and the display even shows up well in clear water, so you can view the screen whilst swimming in a pool (with goggles on, of course).

There is the option to enable raise to wake, meaning that the display lights up when you raise the watch towards your face. In addition, an always-on display option is available but this does drain the battery life quicker.

The GTS 4 comes equipped with a microphone and a speaker, which means you can take calls on it – though you’ll need to enable this feature in the accompanying app. By default, the watch reads out your stats after you have completed a workout. Again, this can be turned off in the settings.

You can also load music onto the watch from your phone, but it doesn’t include support for Bluetooth earphones, so any calls or music must be played through the watch speaker.

Like its sister smartwatch, the Amazfit GTS 4 is primarily a device for health and fitness tracking. However, there are features included which can be useful outside of exercise.

The watch runs on its Amazfit’s own software (Zepp OS) and does not support third-party apps such as Spotify, which may be a dealbreaker for some. That said, you still get a lot of the staples including weather, a calendar and voice memos, as well as navigation apps such as a compass.

You can enable notifications for certain apps on your phone, and even send basic replies to friends and family on pings from WhatsApp and Messenger. Alexa integration is also included, which can be accessed by long pressing the button on the watch. For this to work, the watch will need to be connected to your phone and the internet.

If you are out and about, you can still use the offline voice assistant for basic functions such as starting a workout or adjusting the brightness.

Swiping to the right on the home screen also brings up the number of steps you’ve taken that day, the number of minutes you have worked out and how many times you have stood up during the day. I found the latter to be inaccurate, just as I did on the GTR 4.

Amazfit smartwatches have always had support for a vast range of workouts, and the GTS 4 is no different. You can track over 150 workouts on the watch, including walking, running, swimming, cycling and yoga.

There is also support for more rogue activities, including disco dancing, tug-of-war, and chess, should you desperately want to measure your vitals during any of these. All exercise and health data is logged in the accompanying Zepp app, which is available on iOS and Android.

The app provides breakdowns of the calories burnt during a workout, the route taken (if GPS was enabled during the workout), a chart of how the heart rate fluctuates and more.

The sensitivity for this can be set to low, standard or high. I personally found standard to be the best option, as having it on high would trigger workouts when I didn’t want it to.

Amazfit showcased the weightlifting tracking features on this watch when it first launched, claiming that it could recognise specific strength-based moves such as bicep curls or shoulder presses.

Like on the GTR 4, I found inconsistences with this feature. It sometimes couldn’t identify the correct move I was performing and did not always count the reps properly. Moves can be manually added in the Zepp app, but you cannot type in a custom one if it doesn’t exist in the list of suggested ones from Amazfit.

On the GTR 4, I found issues with pool swimming tracking, particularly when counting laps. Fortunately, I didn’t encounter the same issues with the GTS 4 – there have been software updates since the watch first launched, so accuracy may have improved. However, it does have trouble correctly identifying my stroke, often confusing front crawl or freestyle with butterfly.

Tracking on other workouts such as hiking and Pilates largely seemed accurate and in line with what I’ve seen on other wearables.

Exercise aside, you also get a whole host of health tracking features, such as heart rate monitoring, SpO2 (blood oxygen) measuring, stress and breath measuring. These can all be used separately, or they can be combined using the ‘one-tap measuring’ feature. Again, all the results I got were similar to that on other devices.

The watch can also track sleep patterns if worn overnight. The data reflected the length of my sleep and accurately showed if I was disturbed during the night. Other patterns such as REM and deep sleep are displayed in the app, and you can add additional data on any activities you did before bedtime (such as drinking alcohol, reading etc) to identify any trends.

The GTS 4 has a nap feature, which should detect if you’ve briefly slept outside of your night-time schedule. However, my records showed me as napping either for much longer than what I did, or when I was just relaxing, so it isn’t the most reliable.

The overall layout of the app is simple and easy to navigate. However, there aren’t any official accredited pages to back-up advice – rival Withings links to health organisations for its information. In addition, there are spelling and grammar issues in some parts of the app.

Amazfit claims up to eight days battery life under ‘typical usage’, and around four days battery life with ‘heavy usage’. I found these figures to be largely accurate, with the watch lasting up to a week depending on how much I used the tracking modes.

Should you be out and about and need to conserve the juice, you can enable basic clock mode, which will then give you up to a whopping 28 days’ worth of use.

The battery life isn’t quite as long as on the GTR 4. However, it’s still impressive compared to some other rivals which only last a few days.

To charge it from flat to full takes under two hours, and the magnetic charger is included in the box.

This price is cheaper than some other smartwatches on the market such as the Pixel Watch. However, the tracking software still has some issues compared to rivals, and the lack of third-party apps makes it less versatile for everyday use.

If you could stetch your budget a little further, you could opt for the Samsung Galaxy Watch 5 or even the Apple Watch SE, which both have more accurate tracking overall. You can find other options in our chart of the best smartwatches.

There is no denying that the Amazfit GTS 4 is a great looking smartwatch, with a sleek, slim and comfortable design that is more fitting for everyday than the GTR 4. It also has an excellent week-long battery life.

Whilst the tracking issues are not quite as disruptive as what I found on the GTR 4 when it first released, there are still some inaccuracies. Plus, the lack of third-party apps means that it is less versatile than rivals. Overall, it is sufficient for basic tracking, but for a little bit more money you can get more reliable devices with a wider range of functions.