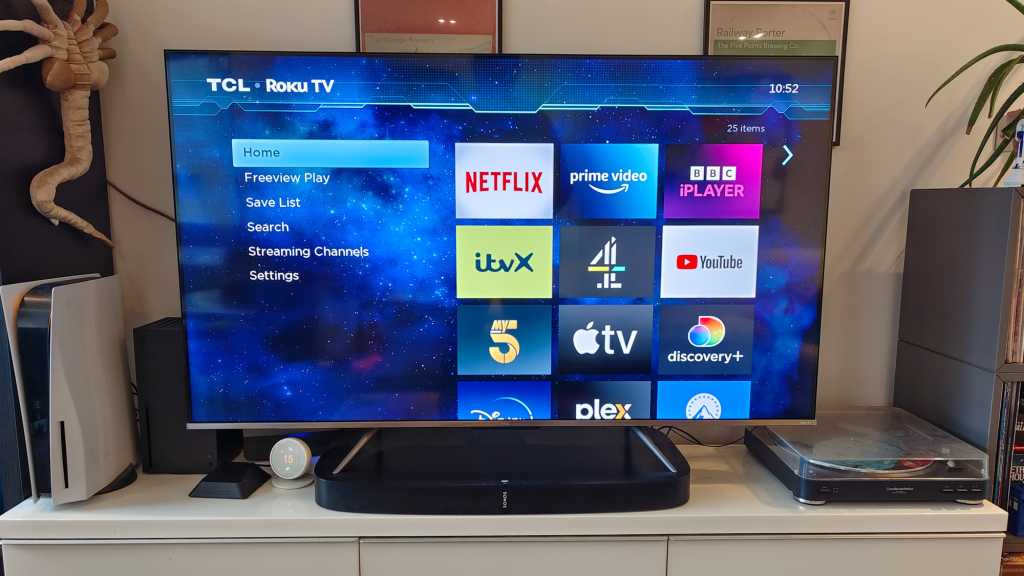 The TCL RC630K is a brilliant budget TV, with QLED quality boosted by Roku’s easy-to-use interface.

TCL has partnered with Roku for the RC630K series, which combine TCL’s TV tech with Roku’s popular software and interface.

More than that though, these are the first Roku TVs to launch in the UK using QLED display technology, netting you the best display tech yet for Roku kit while still staying affordable.

It makes this a TV with impressive bang for your buck, combining that QLED display with a 4K resolution, sleek design, and smooth software, all at an attainable price.

The RC630K TVs look a lot more expensive than they are, with a premium design you might expect from a pricier model.

Sizes start at the reasonable 43in and go up as large as 65in – a big TV, but far from the largest sizes on the market these days. I’ve been reviewing the 55in model.

Whichever size you opt for, the screen is surrounded by a thin black bezel, with an only slightly thicker brushed metal chin on the bottom, which boasts logos for both TCL and Roku – though they’re subtle enough to ignore.

The whole unit is thin and light for the size, making this a great TV for wall-mounting, though it ships with a split two-foot stand. On the 55in and 65in models you get the option to set these feet at either a narrow or wider position, to suit the size and shape of your TV stand, which is a welcome bit of added flexibility.

It ships with a lightweight, plastic Roku remote. Alongside the usual controls you get dedicated shortcuts for Freeview Play, Netflix, Disney+, Apple TV+, and Spotify.

The only downside is this isn’t the microphone-enabled Roku Voice remote, but for that you can either connect the TV to Apple HomeKit, Amazon Alexa, or Google Assistant, or just use the free Roku app on your smartphone or tablet.

This enables voice search and simple spoken controls, along with letting you do all the normal remote stuff with your phone – perfect in a pinch when the remote’s batteries have died or it’s gone missing down the back of the sofa cushions.

First up, in terms of physical connections, you get a full suite of ports. The four HDMI ports include one with eARC support for audio, and they’re accompanied by Ethernet, USB-A, optical audio out, aerial input, a CI card slot, an analogue input and a headphone jack.

The only real annoyance with the port selection is that every input is on the right-hand side of the TV, so if a specific setup or short cables, you may need to re-tool things slightly to suit the set. The HDMI ports also don’t include HDMI 2.1 support, but since the TV is capped to 4K and 60Hz anyway, that really shouldn’t be an issue.

For ease, the four HDMI inputs can be renamed, with a range of presets or the option to pick your own name and icon, so you don’t have to try to remember which console is connected to which port.

All of the TV’s software and smart features are handled by Roku, and if you’ve used any of their streaming sticks before then you’ll find the experience familiar. It’s not the slickest looking interface in the world, but it’s fast, responsive, and most importantly easy to use.

Plenty of the biggest streaming apps come pre-installed, and there are plenty more available to install, including all of the major ones. The biggest headache for UK viewers will be that the versions of the ITVX and All4 apps don’t support live TV streaming as it stands, only catch-up content, so to watch either live you’ll need either traditional TV access or to stream the content to the TV from a laptop. Fortunately the BBC iPlayer app doesn’t suffer the same restriction.

In general, settings are also cleanly and clearly laid out, so it shouldn’t ever take too long to find the option you want and make tweaks as appropriate. Picture settings can be set for the TV as a whole, or tweaked for each individual image source, and there’s a friendly set of simple controls to go through before delving into more complex fine-tuning.

The highlight of the RC630K is the support for QLED. Despite the similar initials, this is actually a totally different type of tech to OLED. It stands for quantum dot LED, and is in fact a type of LED LCD display, rather than OLED.

All that’s just so much jargon though. How does this thing look?

In short: great. Again, especially for the price!

Deep colours and great contrast help both HD and 4K films to pop off the screen, even without the deep, inky blacks you’d get by upgrading to OLED. Original 4K content looks best of course, but upscaled HD material still impresses.

It looks great for gaming too, especially with the optional Game Mode that lowers latency, and does a better job of it than most rivals. The TV is capped at 60Hz, so can’t quite max out the higher frame rate performance of the PS5 and Xbox Series X, but for the most part you’d have to pay a lot more to make the jump to 120Hz.

HDR brightness is good for the price, though certainly behind top sets, but it certainly helps that there’s support for all four main HDR formats: HDR10, HDR 10+, HLG, and Dolby Vision. Plenty of more expensive sets can’t offer that, forcing you to omit HDR on certain image sources, so this is a pretty big win for TCL and Roku.

As for audio, Dolby Audio and Atmos support drive solid sound throughout, and the built-in speakers from Onkyo hold their own. They’re loud and deep enough to fill a mid-sized room, though there’s an inevitable lack of real bass oomph, so separate speakers or a soundbar will still make for a serious step-up if you can afford them.

The 55in model I reviewed definitely feels like the sweet spot: £420 for a QLED display at that size is an absolute steal, only made better by the simple Roku software and excellent HDR support.

If you can afford to spend more you can find better picture quality in some of the other TVs we’ve reviewed, whether that’s OLED panels, 8K resolutions, or 120Hz refresh rates, but most of us won’t get enough benefit from those upgrades to justify the steep increases in price point.

TCL and Roku also make cheaper models with regular LCD displays, but the large jump in picture quality and small increase in price make these QLED versions a better buy, and the best budget TVs around right now.

The TCL RC630K is an absolute winner. It’s rare to get such strong specs at a price this low, especially in 50in+ screen sizes, and to have it paired with strong software feels truly special.

Picture quality obsessives and gamers chasing 120fps may be able to justify spending more elsewhere, but if that’s not you then this really will give you everything you need from a modern TV set, and at far less than you might think you’d have to spend to get it.