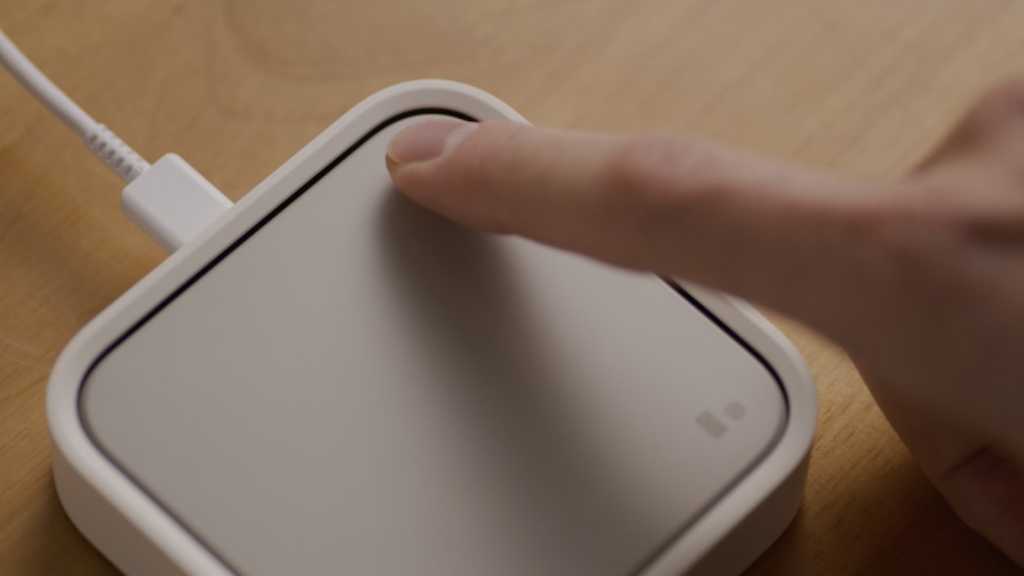 Samsung has just debuted its SmartThings Station at CES, a new piece of smart home tech that takes the form of a big button.

The idea is the button acts as a multifunctional hub that distills actions in the smart home down to a single point of control.

Jaeyeon Jung, Executive Vice President and Head of SmartThings, Device Platform Center at Samsung Electronics, said: “Having a smarter home shouldn’t be complicated or expensive. So we wanted to create SmartThings Station as a simple, reliable and expandable smart home hub.”

In case you’re in any doubt that simplification is the name of the game, the press kit for the SmartThings Station comprises photos of people pressing the button and some bizarrely patronising infographics, showing cartoon characters using the Station’s different functions. Enjoy below!

When the Station is all set up, a short, long or double press of the button can trigger up to three routines. So, you could turn on the TV and dim the lights in preparation for a film, or turn on your music, or trigger a bedtime routine which turns down the thermostat and switches everything off.

But in a world of smart assistants and hands-free systems isn’t getting people to add a big button to their smart home set-up a bit of a step backwards?

Maybe not. According to a 2022 CCS Insight survey, 34% of UK and 39% of US households use some form of smart home device. The industry wants to see that number rise. One of the challenges for companies who want to encourage more people to adopt smart home technology is to get them to understand what, exactly, these new products can do for them.

So, Samsung has made sure that the Station has a number of easy-to-understand functions and a genuine reason to have one in your home. As well as being a hub, The SmartThings Station can also help you find your devices nearby, using Samsung’s SmartThings Find. Plus, it’s also a 15W wireless QI charger.

A charger is useful. A phone finder is useful. A big button is useful. You can see the thinking. If people buy into their smart home ecosystem with a physical device of this kind, then maybe more purchases will follow.

Smart home devices in people’s homes also have an exclusivity problem. Without smartphone access, guests may be locked out and less tech-savvy members of the family may find they don’t know how to turn things on and off.

A big button solves that issue too.

And then there’s the matter of simplifying smart home buying and set-up. Manufacturers want smart home devices to feel more accessible. But there’s a perception that getting products to work will be time-consuming, frustrating or confusing.

Nor is it clear how devices interact. Will you need to use Wi-Fi or Bluetooth? What do you need a hub for? Which products works together?

The SmartThings station aims to fix that as well. Plug in the Station and, if you have a Galaxy phone, a series of pop-ups will appear to guide you through the start-up process. You can then onboard new smart home tech to your system by scanning a QR code with your phone’s camera.

Once Matter-based smart home systems are the norm, all smart home systems may be simpler, but first we’ll have to get to grips with some new terms, such as Thread and border routers. (Want to know more? Read our Matter explainer.)

So, what are companies to do in the meantime? In Samsung’s case, it’s make a bloody big button. And some cartoons to show people how to use it.

Samsung hasn’t given a price for the SmartThings Station but it will launch in the US and in Korea, with its first availability in the US in early February 2023.