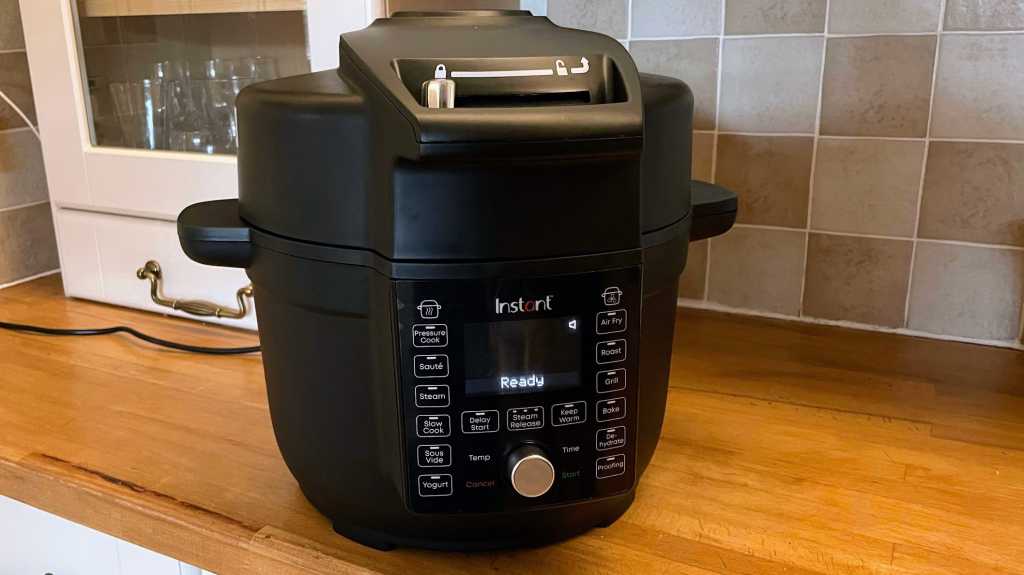 The Duo Crisp with Ultimate Lid is a brilliant multicooker that can cook a variety of wet food as well as being an air fryer. It cooks quickly and is mostly very easy to use, too.

Air fryers are the most talked-about kitchen appliance of the year. And they’re also, probably, the most misunderstood.

Put simply, an air fryer is a miniature fan oven with a catchier name. They heat up quick, and their small size means they can cook small amounts of food faster than your normal fan oven, saving you time and money.

Not all air fryers are the same, and the Instant Pot Duo Crisp with Ultimate Lid is a very different beast from the cheap air fryers you might find stacked high on certain supermarket aisles.

It combines the popular Instant Pot – a multicooker that allows you to pressure cook, slow cook, sauté and other wet-cooking functions – with an air fryer for dry-cooking functions such as grilling, roasting, baking and proofing.

The ‘Ultimate Lid’ part means you can use the various functions without swapping between lids as you do with the regular Duo Crisp. This is much more convenient because it means you don’t need to find additional storage space for different lids.

All of this explains why this cooker costs more than other air fryers, but as you’ll see, it can be well worth the outlay.

As you can see, it’s much too big to open the lid under my kitchen cupboards.

It only comes in black, and has a relatively short power cable – 80cm – so it needs to be placed near a mains socket.

Open the lid, and you’ll find a removable air frying basket that’s also used for steaming and has a non-stick coating. That sits inside a 6.2 litre (6.5 quart) stainless steel cooking pot.

Within the lid is a removable pressure plate. This stays in for most of the wet cooking functions, but needs to be taken out for the dry ones as the heating element and fan sit behind it.

There’s another heating element in the cooking base, which is used for slow cooking, sautéing and other modes.

Talking of modes, the Duo Crisp with Ultimate Lid is a 13-in-1 device and there are 13 buttons: six for wet cooking, six for dry plus a Keep Warm function.

If you’re familiar with Instant Pots, then the wet functions won’t be a surprise: pressure cook, sauté, steam, slow cook and sous vide.

On the dry side, you’ve got air fry, roast, grille, bake, dehydrate and proofing.

In reality, there is no difference between steam and pressure cook (the manual even says so), and there’s also no difference between air fry, bake and roast except that with bake you don’t need to use the stainless steel cooking pot or air frying basket: you can use an oven-safe tray that fits inside the cooker.

Grilling is again pretty much the same, but removes the ability to change the temperature which is set to the maximum the Duo Crisp offers for all dry modes: 204°C.

Cooking with the Duo Crisp with Ultimate lid

One of the most important things to realise is that the Instant Pot’s capacity as an air fryer is relatively limited, although not compared to other air fryers. The basket has a diameter of 215mm / 8.5in, which means you’re going to struggle to feed more than one or two people without cooking things one after another.

For example, if you wanted to make a roast dinner, you’d need to do the chicken first (and make sure you buy one that’ll fit), then the potatoes and parsnips, and finally the vegetables.

You can pressure cook meat in much less time then if you tried to air fry it, and can use the grill mode to brown it off.

There’s room in the air frying basket for four medium-size chicken breasts and a couple of thighs, so it can’t be described as tiny compared to other air fryers, but it is tiny compared to a traditional fan oven.

It’s also worth knowing that, as mentioned, there isn’t really a steam function to replace steaming veg on the hob. The Duo Crisp steams under pressure, which requires learning a completely new technique where you can can’t see the food, test it or even open the lid after cooking as pressure must be released first.

However, it’s virtually pointless to even bother trying to steam any veg since it can take 10-15 minutes to ‘preheat’ before it even starts steaming. So this is one area where the Instant Pot isn’t faster than traditional methods. The only thing it’s good for steaming is corn on the cob.

The capacity is great for soups, risottos and other one-pot dishes, though, and can easily make enough in one go for a family of four or five.

When air frying or grilling, pre-heating times are much faster than a regular oven, and you can usually knock off a good few minutes from the cooking instructions on most foods. I cooked chicken nuggets, fish fingers, sausages and even small pizzas in the air frying basket and they were all cooked well before the recommended times.

I didn’t try making yoghurt or proofing dough, but did find the sauté function to be really useful. The ability to fry onions and brown things off before using slow or pressure cooking modes is handy, as is the fact the Instant Pot lets you pick between six different temperatures, which it reaches quickly and maintains accurately, so you don’t need to supervise it so closely.

Thanks to the display and variety of beeps, the Duo Crisp with Ultimate Lid is quite easy to use. It clearly shows progress through the pre-heating and cooking stages, while the scrolling text means it can provide instructions to “add food”, “turn food”, “close the lid” or “remove pressure plate”, and warn you not to open the lid when steam is under pressure.

Not that can open it: a lock physically prevents the slider being moved until the pressure has been released, and there are various safety mechanisms to ensure the lid cannot be opened when pressurised steam could escape and cause injuries.

There are three options for releasing steam: naturally, in pulses or quickly. If you need to get at your food quickly, the Quick Release option makes steam shoot out of the vent rapidly, while the other modes take far longer.

Each mode has default temperatures and cooking times, and it’s great that these retain the last settings you used rather than always going back to the defaults. It’s simple to adjust time or temperature by pressing the appropriate button and turning the silver dial. You can adjust either during cooking, too.

Handily, you can use the delay start timer, put your food in and have it ready for when you get home.

An unexpected bonus was the fact that my teenage daughter was able to air fry food both safely and unsupervised once she had been shown how to remove the pressure plate. Unlike a fan oven, the Duo Crisp with Ultimate lid will stop cooking once the set amount of time is up, so it’s much harder to overcook and burn food, and is a safer option for those times she completely forgot she was cooking anything and left the house.

One niggle was that – on occasion – the LED for the mode being used would flash and make it impossible to start cooking. There’s no manual in the box, and the online one isn’t particularly comprehensive or easy to follow, and it’s annoying to have to scan the QR core or Google the manual if you need to look up how to use a specific function.

Finally, during testing, the small plastic pin that locates the pressure plate in the lid snapped off as my wife was refitting it. The process doesn’t require any pressure, but if you’re not used to it and don’t get the pin properly in the slot, it – seemingly – doesn’t take much to snap this crucial piece off. And without it, pressure cooking modes won’t work as a seal can’t be formed.

I’ve searched online and seen exactly the same happened to another reviewer, so I know this isn’t an isolated failure. Be very careful with the pressure plate if you decide to buy a Duo Crisp with Ultimate lid.

In the UK, the Duo Crisp with Ultimate Lid costs £229.99 from the Instant website.

You’ll find it a bit cheaper in Argos and John Lewis – £220 at the time of review – but it did drop as low as £155 in the few weeks I spent testing the gadget, so it’s worth keeping an eye out for discounts and sales.

Given the price, it’s a bit disappointing it comes with only a one-year warranty.

If you don’t already have a multicooker and will use those functions – pressure cooking, slow cooking and sautéing – regularly, then the Duo Crisp with Ultimate lid is a great buy.

Yes, it’s quite expensive, but offers numerous benefits, including the convenience of not having to swap lids (or store them), and the fact that, unlike opting for a separate air fryer and Instant Pot, it takes up less space and uses only one mains socket.

If, on the other hand you already have an Instant Pot or would mainly use the air frying mode, then you can save money on a cheaper air fryer which will probably take up less space and might even offer a bit more internal space for cooking.

To see these alternatives, take a look at our roundup of the best air fryers.