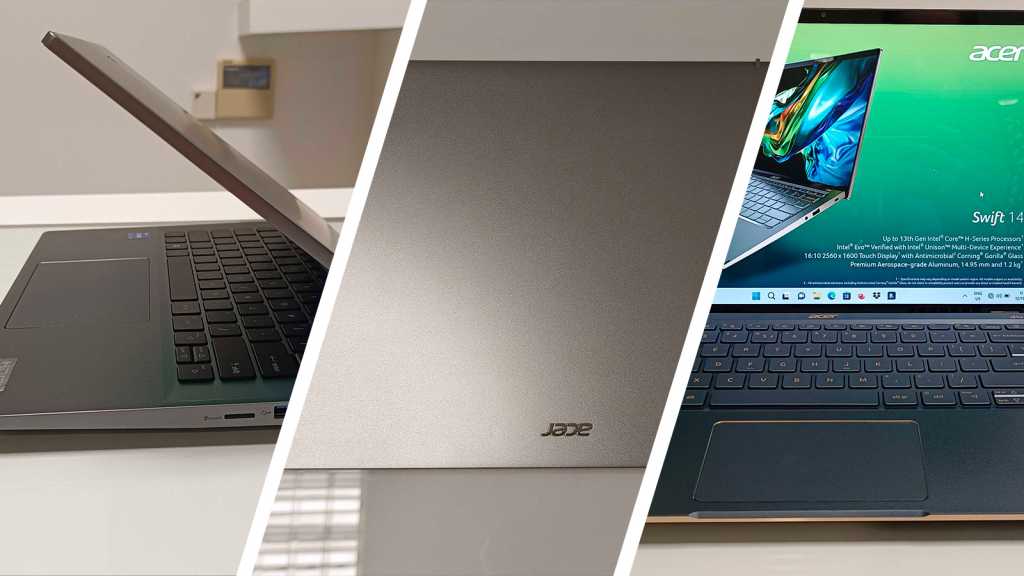 Acer has refreshed both the design and names of its Swift laptops.

The range includes the Swift Go – a thin and light notebook designed for everyday use. It is joined by the flagship Acer Swift 14 for those who want a high-end design, as well as the Acer Swift X 14 if you’re looking for more powerful performance.

The Swift Go is a refresh of the Swift 3. It comes in two sizes: 14in and 16in and either a silver or gun metal grey finish. There are also a range of configurations to suit different budgets. The laptops live up to the Go name with a slim design, weighing under 1.3Kg for the smaller model and under 1.4Kg for the larger laptop.

All laptops in the Swift range have a wide range of ports – this includes USB-C with Thunderbolt 4, HDMI 2.1 and a MicroSD card reader on the Go and X 14. Some comparable models from the likes of Lenovo only opt for USB-C ports with an adaptor in the box, so it’s good to see that Acer has retained so many ports.

With slim bezels that create a 90% screen-to-body ratio, these are devices that would be ideal for using round the house for streaming and other activities. Of course, if you’re looking for day-to-day productivity, then some models in the Go range are still perfectly suited for both work and play.

The top spec models (the SFG16-71 and the SFG14-71) come with the latest 13th gen Intel H-series processors, as well as touchscreen OLED displays with a 2.8K resolution on the 14in model and a 3.2K resolution on the 16in. One major design change is the addition of a 16:10 ratio, a more common format we’re seeing across laptops as of late.

The Swift Go doesn’t exactly stand out when it comes to design, so if you’re after something a little flashier and more premium, the Swift 14 is the laptop to look at. It’s the successor of the previous generation Swift 5 – with Acer opting for a name that reflects the laptop’s screen size.

The Swift 14 has a machined unibody chassis, along with an aerospace grade aluminium body. It comes in two colours: Mist Green and Steam Blue. I can’t speak on the former, but the latter has an elegant finish that stands out from the crowd.

Like the Swift Go, the Swift 14 also boasts the new Intel H-Series processors, a touchscreen display, an estimated 9.5-hour battery life and a range of connectivity ports.

The line-up is rounded off with the Acer Swift X 14, a model in the Swift X line. This device is packed with an advanced CPU and discrete GPU, with the option of up to NVIDIA GeForce RTX 405. The laptop is NVIDIA Studio-validated, and includes a large fan, an inlet keyboard and dual D6 copper heat pipes to keep everything cool as you work.

Whilst not touchscreen, this device comes with a 14in 2.8K OLED display with a 120Hz refresh rate and 500-nits peak brightness. It doesn’t have the wow-factor looks that the flagship Swift 14 boasts, but it’s certainly the best option in the range if you plan on taking on any heavy creative work.

Check out our chart of the best laptops to see how the new Swift range stacks up against competitors. You can also read up on the next generation of Predator and Nitro gaming laptops from Acer.