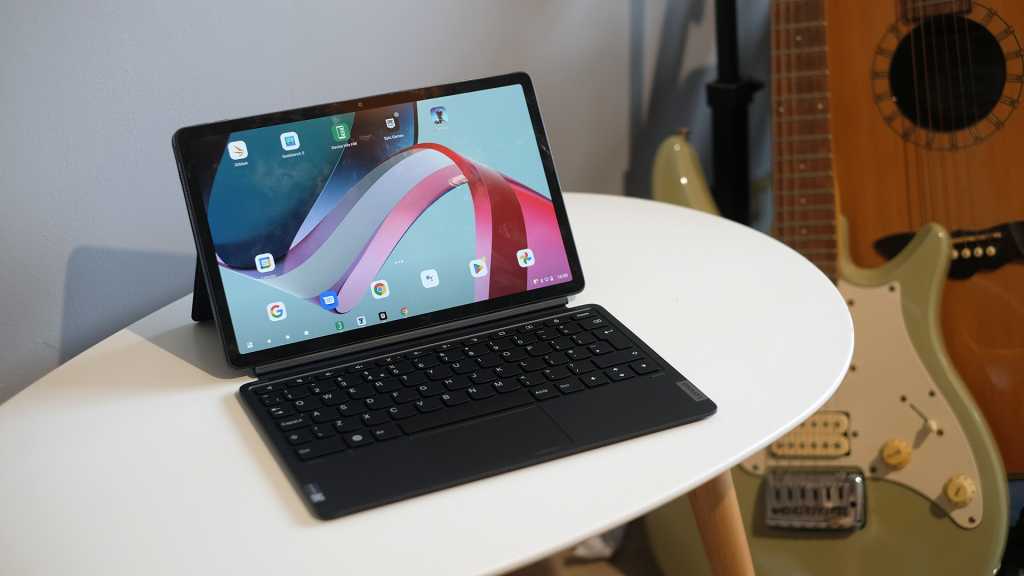 Lenovo’s 2nd gen Tab P11 Pro is a versatile tablet with a quality display that can turn into a digital art surface or makeshift laptop with a few official accessories. However, it feels a little cheap considering the price, it’s not as powerful as an iPad, and if you’re not bothered about power Samsung’s Tab S6 Lite is a better deal.

The Lenovo Tab P11 Pro is a mid-range Android tablet that’s here to sweep up prospective entry-level iPad 10.2 or iPad 10.9 buyers who like the sound of a slightly larger screen.

It has an 11.2in screen, a bit smaller than that of the first-gen Tab P11 Pro, which had a 11.5in display. This panel is the highlight, as it’s a sharp and punchy OLED.

The rest? It’s not quite as hot. The Tab P11 Pro is a lot less powerful than even the basic 10.2in iPad, and its use of a relatively little-used MediaTek chipset does not seem to help with game optimisation.

Its build is also less pleasant than the Samsung Galaxy Tab S6 Lite’s, which is cheaper and still the go-to for non-iPad digital drawing on a budget.

While Lenovo has not messed up any key elements here, the P11 Pro costs a bit too much to nudge its way into any top positions for buyers. By itself the tablet price is too close to the iPad 10.9 for comfort, and for the same price as combining it with the optional keyboard and stylus, you could get a decent laptop instead.

The Tab P11 Pro looks the part from arm’s length, and on paper, but get your hands around one and you’ll find it’s not quite as high-end as an iPad Air or Samsung Galaxy Tab S8.

Its back and sides feel like plastic. Lenovo describes the build here as “magnesium alloy + PMMA + PC”. Our best guess is that the sides are “PC”, polycarbonate, and the rear is a thin sheet of magnesium alloy with a layer of PMMA on top. PMMA is acrylic, a kind of fake glass in this context.

It looks good, at least until it picks up a thousand fingerprint marks after a hour of use, but does not feel as expensive as aluminium or real glass.

This was, unfortunately, about the first thought we had on using the P11 Pro. Still, it’s light enough at 6.8mm thick, and comparable to the competition in weight at 480g. It looks smart too, with a two-tone finish, one side shinier than the other.

However, the speakers are the true highlight of the outer hardware. The Tab P11 Pro has four JBL-branded drivers. Their mid-range projection and bass power outclasses the output of the 4th generation iPad Air we had to hand for comparisons. Great for games, great for movies.

It’s a shame that the audio focus doesn’t extend to putting a headphone jack in though. Leaving sockets out of phones is one thing, but tablets? There is, however, a SIM-style tray that is home to a microSD slot. Expandable storage but no headphone jack — that’s the state of portable Android tablet tech in 2022, apparently.

The Tab P11 Pro can also function a bit like a laptop if you buy the keyboard case accessory. While this mimics the keyboard of a Microsoft Surface Pro, the style is a little different. It comes in two parts, necessary because the tablet does not have its own stand.

There’s a backplate with a clever integrated hinged stand, and a little compartment for the stylus (also not included as standard). The keyboard part is completely separate, and both parts attach to the tablet using magnets.

With both bits in place, the Lenovo Tab P11 Pro becomes about as chunky as a laptop, but both sides of the tablet get a good layer of protection. The keyboard feels quite good too, with proper key action and a nice stiff key plate. However, we’re not in the same league as the Microsoft Surface keyboard here.

The touchpad is plastic, not glass like Microsoft’s, and there’s no keyboard backlight.

Colour and contrast are excellent too, as is to be expected of an OLED tablet. The default colour mode looks a bit excitable, but you can switch down to a more sRGB-like “Standard” mode if you want to make it easier to appreciate the difference between more and less saturated app icon designs, for example.

This is a 120Hz screen, for that extra-smooth high refresh rate appearance when scrolling, and peak brightness is good too. Indoors the P11 Pro will reach 463 nits, enough to look outright uncomfortable in a darker room. And unlike a lot of older tablets, there’s a “high brightness” mode that engages when you go out into direct sunlight. This bumps the brightness up to 622 nits, comparable with the power of an OK mid-range OLED phone.

There are just two issues with the screen. As with some OLEDs, it takes on a slight blue-green tint at an extreme angle — it’s an effect that has largely gone in many recent OLED phones.

The tablet also has major issues with HDR content. While it supports HDR 10+ and Dolby Vision, we found HDR content on YouTube exhibited very obviously raised blacks. It makes it seem as though you are watching on a low-quality LCD display, so hopefully this will be fixed in a software update.

This tablet also supports the Precision Pen 3 stylus, although it is not included as standard. It’s a full-size pen with 4096 levels of pressure sensitivity and intuitive tilt detection.

This isn’t a basic active stylus, as it has a battery and wirelessly charges when you attach it to a magnetised spot on the tablet’s back. And the single button can be used to bring up a shortcut menu on the tablet itself.

It feels good to use, although the lag — how far the line drawn trails behind the stylus nib — varies quite a bit between apps. The preinstalled note-taking app is super responsive, but there’s noticeable lag in Infinite Painter, although its virtual pencils work beautifully with the pen’s tilt detection.

A common criticism of Android tablets is that they are basically huge phones, with little in the way of optimisation to make them seem more than that. That would still largely be the case if you left it to Google — maybe this will change in 2023 with the Pixel Tablet.

Google made sure Android apps can generally scale to screens of different shapes, resolutions and sizes, and called it a day, more or less. That doesn’t matter too much in cheap tablets, but in pricier ones like the P11 Pro it’s left to the manufacturer to go a little further.

You only really see the results of this when you attach the Tab P11 Pro’s keyboard, which makes it enter ‘Productivity mode’. This is an interface designed to look and feel a bit more like Windows or Mac OS.

Some touchscreen navigation gestures are disabled, there’s a more built-up status and app shortcut bar at the bottom. Apps also load in scalable windows, rather than automatically filling up the screen.

It makes the tablet look more like a laptop but, as usual with these custom UI layers, a few creaky parts remain. The big one is that most apps will launch as little portrait aspect windows, making it look as though you just booted up an Android phone emulator on, say, a Windows laptop.

If you want to use the P11 Pro as a laptop, you can. But you will have to put up with reminders it wasn’t made for the job.

A MediaTek Kompanio 1300T runs the show, and this seems to be very similar to the better-known Dimensity 1200 used in phones like the OnePlus Nord 2. It’s a solid processor, but not nearly as powerful as those of any of the iPads sold today.

Lenovo comes out better if we compare the P11 Pro to Samsung tablets instead. It is much more powerful than the Samsung Galaxy Tab S6 Lite, and the GPU side is punchier than that of the ageing Samsung Galaxy Tab S7 FE. It also comfortably outpaces its predecessor, the 2021 Tab P11 Pro.

However, run Fortnite and you see the downside of buying a tablet with an unusual SoC, released without much fanfare. It will only run at bog-standard graphics settings even though the P11 Pro should have the power to do much better. Only Medium (or below) graphics is available, and 30fps is the maximum frame rate setting. It runs very well, but the game will look a whole lot better on some other tablets.

The Lenovo P11 Pro has an 8000mAh battery, the same size as the Samsung Galaxy Tab S8’s, which has a similar-sized screen.

As is usually the case with Lenovo tablets, it lasts a good long while when playing video. Streaming YouTube it lasts 12.5 hours, a bit below Lenovo’s 14 hour claim but close enough to make that seem feasible at lower brightness, or using a different app.

On the other end of the scale, the tablet should last around 5.5 hours of 3D gaming based on our testing.

Battery life is good, but the cameras? Not so much. The P11 Pro has a single 13Mp rear camera with a flash and a front 8Mp camera.

Stills are going to look significantly worse than those of any half-decent recent phone that costs upwards of, say, £180. Night images are very poor, and while daytime ones can look OK, we’re dealing with a pretty small camera sensor here so they are never going to be great.

The Lenovo P11 Pro rear camera can shoot video too, at up to 4K resolution. However, there’s no software stabilisation so handheld clips are liable to look jerky.

Around the front, the 8Mp camera is more notable despite being lower-spec, mostly because it’s going to do a better job for video chat than the average laptop webcam. While lower light video looks quite noisy, this front camera can capture a solid amount of facial detail even in slightly murky indoors lighting. While your phone may still have better hardware, using the P11 Pro for video calls is a sound idea.

The Lenovo Tab P11 Pro Gen 2 is a solid Android tablet that is going to struggle to compete with the iPad 10.2 and 10.9. It sits between these two in price and isn’t as powerful or as expensive-feeling as either.

It also lacks the core appeal of the Samsung Galaxy Tab S6 Lite, which offers one of the cheapest ways to get a quality digital art tablet.

Mid-tier tablets like this really struggle to get out of the iPads’ long shadows, and the plasticky feel of the outer shell doesn’t help. However, there’s plenty of good stuff to appreciate here, like the strong speaker array, good light-use battery life and punchy OLED display — at least when not playing HDR video, as that is bugged out at launch.