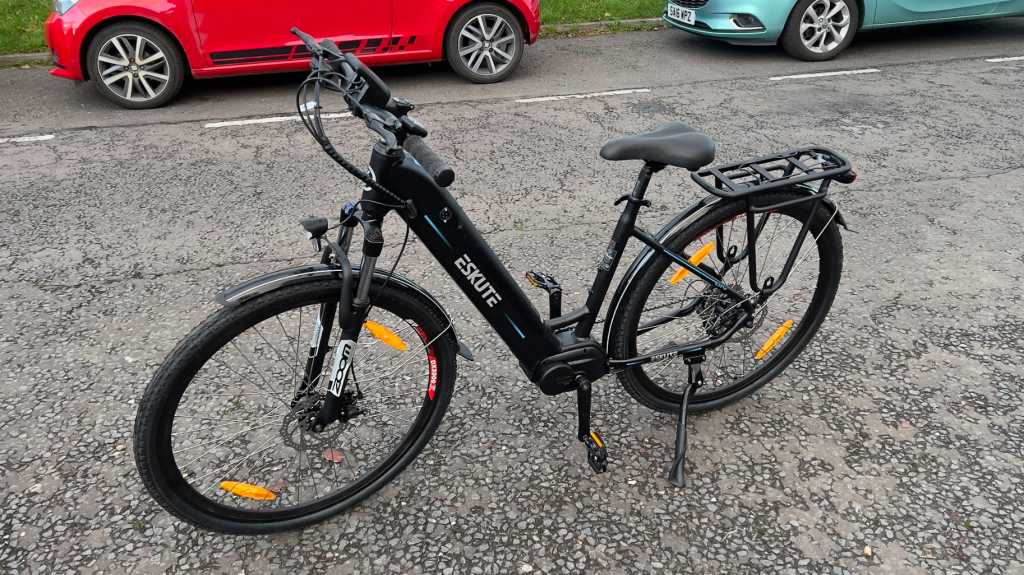 The Eskute Polluno Pro is a decent e-bike for commuting and with its torque sensor, comfortable, noiseless ride and step-through design it’s great for everyday use. It is heavy, though, and shorter riders may find it too big.

As cycle-to-work initiatives continue to grow in availability and popularity, there has been a corresponding rise in the number of e-bikes aimed solely at commuters. And if the hypothetical Joe/Jane Bloggs needs one to ride to the office, dressed to impress in the boardroom, there are a few important design considerations.

The bike must be comfortable, it must fit a variety of shapes and sizes, it should be safe and easy to manoeuvre in traffic and most importantly, it must look at least somewhat classy. This, of course, is a difficult set of priorities to balance at any budget, and so the likes of the Eskute Polluno Pro have their work cut out.

Targeted at those who want to ditch the car and get to work in style without breaking the bank, the Polluno Pro emphasises a ‘noiseless’ design, a torque sensor and a long range of up to 80 miles as its main selling points.

But with some serious competition at this price, does it do enough to earn our recommendation? Read on for our full review.

The first thing you see is the Polluno Pro’s step-through frame design, which makes it easier to mount than a ‘normal’ bike, and that’s something you’ll appreciate if you’re wearing your work clothes.

The recommended height range is 160-200cm, so shorter riders under about 5ft3 (162cm) could find it difficult or impossible to ride, and there is no option of a smaller frame. That’s the first compromise, them.

The second thing you notice is the large motor assembly between the pedals. That’s because this is mid-drive bike: the motor isn’t in the rear wheel hub as it is with most e-bikes.

Eskute has opted for the M200 system from Bafang, a well-respected manufacturer in the e-bike world.

The Polluno Pro comes in any colour you like (so long as it is black) and isn’t a bike that will turn heads for its sleek looks. Like some of its rivals, including the Eleglide T1 Step-Thru, there’s a huge battery, which is bulky and makes the frame look thick and not very elegant.

The massive battery contributes to the high overall weight of the bike, which at 27.5kg is difficult to lug it up a flight of stairs. This could be an issue for those who live in a flat and can’t store the bike outdoors.

Fortunately, the battery can be removed and/or locked in place using the provided keys, and a full charge took around 5 hours on average.

We found in general use that the Polluno Pro was comfortable to ride. The saddle had enough padding to make even extended rides a breeze, while the front suspension did a good job of absorbing lumps and bumps on the road, working particularly well on cobbles.

The disc brakes, too, proved to be tight and responsive, even at higher speeds.

There’s a control panel mounted on the left handlebar, with a power button, buttons for power assist levels and an on/off button for the headlights. Though there isn’t any way to differentiate between the buttons by touch alone, the layout lent itself to quick, easy changes on the fly.

The display is separate, in the middle of the handlebars. It displays only trip distance, remaining power and the current speed. There’s no app or Bluetooth, which may be a good thing depending upon your preference.

The Polluno Pro has nine-speed gears, which were smooth in operation and welcome when tackling steep hills in particular. But we would have liked an indicator to show which gear you’re in.

While many electric bikes ‘whine’ when the motor is working hard, the Polluno Pro promises not to. And in general this proved to be true. Where you might not hear the whine of many rival bikes over traffic, you’ll be hard pressed to hear the Polluno Pro even when there are no cars at all.

The motor does emit a noise, but it is so minimal as to be totally insignificant.

Whether this is a real benefit in everyday use is really down to where you ride and how much you care about it. I certainly enjoyed the quiet.

More important is the use of a torque sensor in that mid-drive motor assembly. In many budget e-bikes a cadence sensor is used, but a torque sensor means that the motor will try to match the pressure used when pedalling to apply power, making for a much smoother ride in general.

The benefits of this setup are clear out on the road, in traffic in particular. Where cadence sensors can cause jerky movements, the Polluno Pro leaves the rider feeling completely in control, a big win for a bike intended to be used on the commute.

Five power settings are offered, and thanks to the 65Nm of torque on offer – considerably more than you get with most e-bikes at this sort of price – there’s plenty of assistance for getting up hills.

One advantage of having a massive battery is bigger range. Eskute says “up to 80 miles” (130km) but – as ever – this will vary depending on rider weight, cargo weight, temperature, the incline of your route, the power assist level you use and other factors which all battle to bring that figure down.

In general use, I found that range was around half, mixing in some hill riding and some more difficult terrain. If you commute to work every day, this is a bike which will need charged at least twice per week, depending heavily on the length of said commute.

However, this isn’t bad at all, and the Polluno Pro has better range than quite a lot of rivals.

Eskute is a direct-to-consumer company, so if you’re tempted by the Polluno Pro, head straight to its website where prices start at £1899. You get a two-year warranty as standard.

There’s also a Polluno – without the Pro – which is almost identical, but doesn’t have the mid-drive motor and uses a rear-wheel hub motor and cadence sensor instead. This is £1299, so is quite a bit cheaper and shows how much of a premium you pay for the Bafang M200.

Unfortunately, Eskute doesn’t yet sell electric bikes in the US.

Naturally, there are several alternatives you might want to consider. One is Eleglide’s T1 Step-Thru which offers the same frame design, but at a significantly lower price, albeit without the upmarket (and powerful) Bafang mid-drive motor.

At £1595 the MiRider One might appeal for a different kind of commute. Though it has a shorter range (45 miles) it is lighter and as a consequence will be easier to take on public transport if necessary, not least because it folds up.

For the same price – £1595 – the Raleigh Array offers more traditional looks, but also lacks the finesse of the mid-drive motor.

See more in our roundup of the best electric bikes.

There’s no shortage of e-bikes designed for commuting. To be successful requires a certain blend of features and although the Eskute Polluno Pro might not have all of these, it does enough to deserve attention.

With a comfortable ride, a sophisticated torque sensor and mostly silent operation, it will be a reliable workhorse for anyone looking to get to the office and back without fuss.

But it is exceptionally heavy and the large frame doesn’t cater for shorter riders. If neither of these things bother you, and you can afford the price, the Polluno Pro is a great choice.

In this context, this will mean a bike that performs well and with no individual component that feels like a compromise.