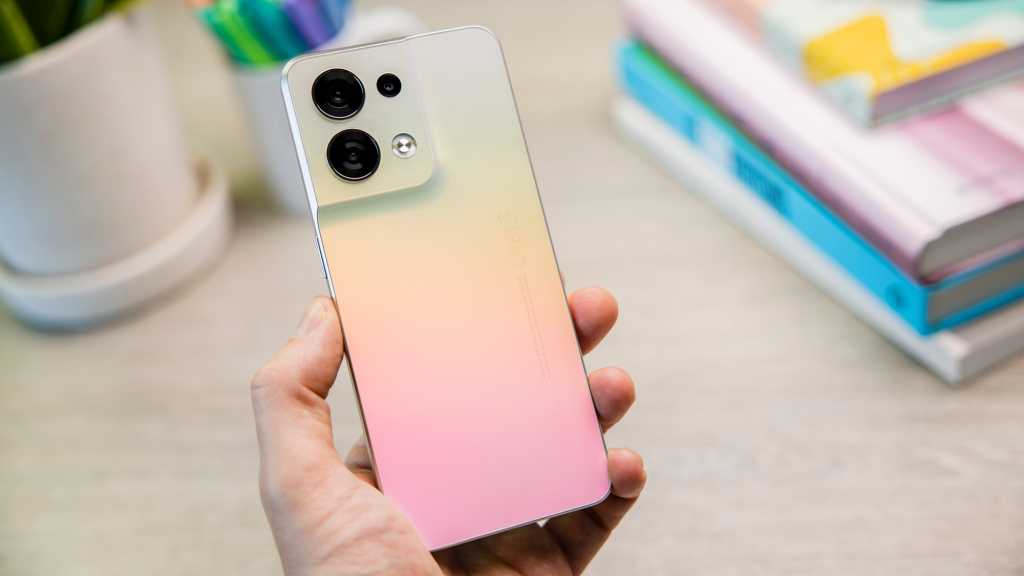 With a competitive price, a stunning design, durable performance and a great main camera, the Oppo Reno 8 is a true challenger in the mid-range space.

Oppo has three phones in its Reno 8 line: the premium mid-range Reno 8 Pro, the more affordable Reno 8 Lite, and then the Goldilocks model, the Reno 8.

Whilst this phone doesn’t have the same flagship camera tech that the Reno 8 Pro boasts, it still has a sleek build, fast-charging technology and a decent processor for the price. But is the Reno 8 truly the best of the bunch?

The Oppo Reno 8 comes in two colour options: Shimmer Black and Shimmer Gold. I tested the latter option, which is also fitted with Oppo’s Glow finish. This means that under different lighting conditions and angles, the body reflects multiple colours, including reds, blues and greens.

Overall, it is a stunning, high-end look – this author even received compliments on it. As the back is plastic, it feels more robust than glass phones, and it doesn’t have the Reno 8 Pro’s nasty habit of throwing itself off surfaces. The camera module is quite a statement, protruding out on the left-hand side with large, circular lenses.

The phone is 7.67mm thick, and weighs 179g, making it slim by modern standards. It comes with an IP54 rating, which means that it is protected against limited dust and light water spray – but I’d advise against using it in true wet weather. No MicroSD card slot is included.

The Reno 8 comes with a USB-C port for charging, which also doubles as a port for headphones – you’ll find no headphone jack on this model. Like the Reno 8 Pro, this phone doesn’t include a case in the box. Whilst Oppo claims this is to help reduce waste, it is an annoyance as cases are not as readily available as those that are designed for flagship models.

The Reno 8 is fitted with a 6.43in FHD AMOLED display with Gorilla Glass 5. The screen is lively and bright, with vibrant colours that pop out.

The phone comes with up to a 90Hz refresh rate, which may be a disappointment if you’re a big mobile gamer hoping for a faster 120Hz display. There’s also no dynamic refresh rate – you can only choose between the lower 60Hz option, and the higher 90Hz version. Nonetheless, the screen is perfectly adequate for day-to-day tasks such as scrolling through social media and typing up notes, so most people really won’t mind.

The under-display fingerprint sensor on the device also works consistently – an improvement from what I found on older phones from Oppo.

The Oppo Reno 8 comes with dual stereo speakers, which produce loud audio with decent bass. However, the quality doesn’t quite measure up to the best phones, with additional audio processing software.

You can only get the Oppo Reno 8 in one configuration: 8GB RAM and 256GB storage. Under the hood there’s a MediaTek Dimensity 1300 chipset, the same processor that’s found in the mid-range heavyweight, the OnePlus Nord 2T.

This creates quick and responsive performance during use, even when multitasking between numerous apps. I was able to browse social media, stream Twitch, take photos and call my family with ease. The phone is even capable of some light gaming. However, if you play anything strenuous, this will throttle the processor and heat up the phone a little.

It’s not quite as powerful as the Reno 8 Pro, which manages to stand against some flagships – but it can certainly hold its own against similarly priced mid-range models from OnePlus and Google:

Whilst the Oppo Reno 8 only has a 4500mAh battery, it goes a real long way. I was able to stream videos, browse the internet, doom scroll on Twitter and more for almost two days on average – even using the higher refresh rate.

Our PCMark battery test also reflects this, with the phone achieving an impressive score of 14 hours and 18 minutes.

The fast-charging tech is impressive, with the phone getting to 99% from empty on a 30-minute charge. At one point, the phone was close to 1%, and a five-minute juice before I went out the door made it last a few more hours.

It’s rare to find a phone that has such an impressive battery and charging this fast – Oppo really does excel in this area, especially for the price.

The Oppo Reno has a triple camera set-up, made up of a main 50Mp lens with a Sony IMX766 sensor, as well as a 5Mp wide-angle lens and a 2Mp macro lens. The main camera is the same hardware seen on the more premium Reno 8 Pro. However, this phone misses out on Oppo’s dedicated Marisilicon X NPU.

Overall, this camera produces decent photos, performing best under bright daylight conditions, with indoor shots and dimmer environments losing a bit of clarity. It captures things in motion such as moving water and fireworks quite well too – even without the inclusion of OIS.

Like some other mid-range snappers, the HDR mode overblows some colours – particularly the greens on grass, which get an unnatural tinge. It is a shame, as other elements are enhanced well with this on.

The opposite can be said for the 5Mp wide-angle snapper, which should only really be used for large landscape shots. The sky looked washed out, whilst building details seem fuzzy and muddy. The 2Mp macro lens is also a hassle to get a half-decent shot with.

When zooming, anything up to 5x is useful for closeups, but avoid anything higher than that. At 20x, the camera shakes so much that it is almost unusable – this is where OIS really would have helped. In addition, colours don’t have the same punch as they do when using the main camera without the zoom, and lighting glare is sometimes an issue as well.

Night mode isn’t as crisp as it is on Oppo phones with the Marisilicon X chip, with details sometimes blurring into one another, especially for subjects that are far away. However, it is sufficient enough to lift lighter colours, and the night sky doesn’t have that jarring blue tinge that I’ve seen from the likes of Realme.

On the front, you get a 32Mp, f/2.4 selfie camera with Sony’s IMX709 sensor. Whilst the images appear relatively good quality, the bokeh effect struggles to identify textures such as fine pieces of hair, even on the lowest strength (which can only be adjusted before you take the photo). Shades are much more vivid and lively on shots taken in brighter conditions.

Video recording is available from 4K up to 30fps, and 1080p up to 60fps. The ultra-steady mode (available at 1080p) minimises handshake, but I found the overall effect too strong and unnatural.

The Reno 8 comes with ColorOS 12.1, which is Oppo’s version of Android 12. Oppo’s skins of Android are always user-friendly and well laid out. You can multitask between apps using either split screen or floating windows – though the gestures for these can be finnicky.

There is some annoying bloatware, with games such as Piggy Go and Tile Master 3D. However, Oppo isn’t quite as guilty as the likes of Huawei and Xiaomi for this sort of thing.

The phone has also been confirmed to get an update to ColorOS 13, but this won’t come until either the end of 2022, or in the first few months of 2023.

Prices for the Oppo Reno 8 starts from £419/€599. In the UK you can buy it from the likes of Oppo, Amazon, Currys, and Carphone Warehouse SIM-free, and on contract from Vodafone and EE.

Oppo phones aren’t available officially in the US. However, you can still get it imported from sites such as AliExpress.

Whilst the Reno 8 Pro outshines this phone with its Marisilicon X NPU, flagship killer chip, and better waterproofing, the Reno 8 is a more competitive option in the mid-range space, cutting back in all the right areas to keep the price down.

For a similar price you could consider either the OnePlus Nord 2T, or the Google Pixel 6a. Alternatively, you can read up on our picks of the best mid-range phones for more options.

Like the Reno 8 Pro, the Reno 8 holds its own as solid mid-range phone. It has a stunning design, capable performance, a user-friendly OS, speedy charging and an extremely durable battery life. The main camera is also largely impressive – though the other lenses aren’t anything to shout about.

Whilst there are some notable downgrades from the Pro variant of this phone – notably the processor, the refresh rate, the camera software and the IP rating, the £419 price tag is much better situated in the mid-range market. It is a true gem, and a worthy rival to other phones from OnePlus and Google.