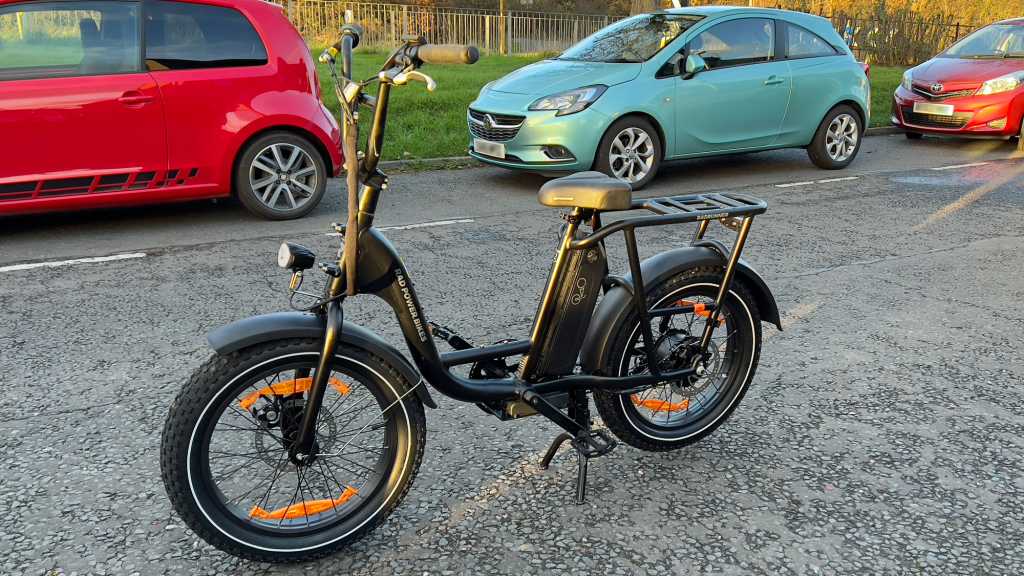 The RadRunner 2 is an electric utility bike that attempts to do it all, but in trying to be everything to everyone it inevitably falls down. It will appeal to first-time buyers looking for an inexpensive electric bike for carrying luggage (or a second person), but range is relatively limited and optional accessories can push the price up quite a lot. Plus, taller riders will find the frame too small for comfort.

The electric bike as a product category is, in the grand scheme of things, pretty new. Exploding in popularity, particularly as Joe Public looks for an alternate transport option for short commutes, it seems the market for these bikes will only continue to grow.

One style in particular that seeks to replace short car journeys is the utility bike. For small business couriers, parents with kids and more, the ability to easily shift a small (but heavy) cargo with relatively minimal effort is highly welcome.

The RadRunner 2 is one such option, which starts at US$1499/£1349 and positions itself as a jack-of-all-trades rather than a dedicated utility bike, able to work as just about any kind of bike as well as being a capable cargo carrier. Its marketing even touts it as part of something new altogether, with a classic step-through ‘moped’ style.

Does it manage to do quite enough to deserve a recommendation? Read on for our full review.

The utility bike, as a general rule, doesn’t ascribe to the same design principles as the ‘standard’ bike. There’s no requirement to produce something lithe and elegant that could be as at home on the Champs d’Elysee as on Ordinary Street – instead it is robustness and the size of the rack that count.

Even on these merits, the RadRunner 2 is a slightly odd customer. First, and unusually, it is designed to fit a range of ‘average’ heights, those being 150cm to 188cm. This is to be applauded as many e-bikes in particular leave out the sub-160cm club, however it introduces a range of compromises.

At 177cm, approaching the upper limits of the fit, I found that the bike was difficult to adjust into a comfortable riding position between the handlebars and the saddle. This made for a cramped ride in general, though those with shorter legs might not encounter the same issue. A friend at 150cm was delighted to find a bike that wasn’t way too big – so perceptions of this may skew heavily on height.

However, this is why other manufacturers offer different frame sizes. But, like Cowboy, Rad Power Bikes does not do this. It’s a one-size-fits-some bike

The large, sturdy cargo rack can be customised with a number of different accessories provided by Rad Power Bikes, including to carry an extra passenger if desired (with the added seat for $99/£89). This is what in part defines the ‘moped’ style, and the riding position – which requires an unusually straight back. This, with the price, will automatically make this bike of interest to those who regularly ride with a cargo, as there is almost nothing available for this sort of price.

Two colours are available, Black and Forest Green, and while both are pleasant enough they will certainly not turn heads on the street.

Beyond the fit, what stands out about the RadRunner 2 is the battery, which sits behind the seat post. Years ago, that was generally accepted as the only place it could go, but these days most manufacturers embed the battery within the frame for a sleeker look.

The size of the battery along with the generally chunky design also bring another compromise: weight. At 29kg, the relatively diminutive dimensions of the RadRunner 2 belie its sheer heft. If you are a commuter, this might automatically mean looking elsewhere, particularly for those who take their bikes with them on public transport.

The battery can be removed from the frame for charging off the bike, but it isn’t the easiest thing to do. The key-operated lock prevents anyone from taking the battery while the bike is parked, and it also used as an ‘ignition’: it must be set to the appropriate position before the bike will power on. But you can then remove the keys before riding.

Braking performance with the Tektro mechanical disk brakes was mostly good, being tight and responsive in general even at higher speeds.

An interesting choice made with the design of the RadRunner 2 is the choice of tyres. Typically, different tyre profiles are for different kinds of terrain, with thin tyres being for the road and thicker tyres for off-road conditions. With this in mind, the RadRunner 2 is a road bike that has very thick tyres and so blazes a trail of its own. There are of course drawbacks to this, chiefly being that there’s a fair amount of resistance on asphalt.

It does mean that riding over cobbles is a little more cushioned, but it seems that ‘fat-tyre’ bikes are becoming more and more common on the road. Other electric bikes around this price deigned for on-road use might lack the versatility of the RadRunner 2, but they are easier to ride, especially when the battery runs out.

Another inclusion which might be considered as somewhat odd is the single gear system. Where a more typical option might contain at least a five or seven gear option, the RadRunner 2 is single speed (with a derailleur to tension the chain – something we’ve not seen before).

This is perhaps a consequence of hitting a budget price point, but it is unfortunate not to see a more typical gear system included. Commuters who cycle up hills regularly will find the lack of flexibility here to be an issue, as it can make each ride a chore.

The display is clearly intended to save cost too. Where some e-bike displays show a variety of useful information, the RadRunner 2’s shows barely anything.

The remaining battery power and the current assist level are indicated via rows of LEDs, and buttons are available to increase the assistance, decrease it and activate the included headlight, nothing more and nothing less. There isn’t any differentiation between the buttons in touch, so you have to look at them to change assist levels while cycling, and they need a good push to activate.

People looking for a budget load carrier likely won’t find this to be too much of an issue, but other bikes around this price have much better displays. (You can upgrade to an LCD screen for $95 / £85.)

It is possible to have the bike assembled on your doorstep following delivery as an add-on service, and it may be worth paying for the privilege. Although the more technically minded might find it not to be an issue, we found the RadRunner 2 relatively complex to assemble, with the fenders in particular proving difficult.

So what is the bike like to ride? This is of course the big question, to which the answer is: mostly fine. Though slightly non-descriptive as an answer, this means the RadRunner 2 is very average to ride.

A positive initially is comfort, the thick saddle is designed to absorb lumps and bumps from the road and does so with confidence. Cobbles in particular, aided by the large tyres, proved to be relatively comfortable to ride over.

The picture with the motor is somewhat less positive, though not wholly negative. A cadence sensor is used (activating with the movement of the pedals) and it is somewhat refined with its tuning. It doesn’t send the rider hurtling along with a merest movement of the pedals and, equally, doesn’t respond with a jolt following a hard push. Instead it will generally match the speed desired and doesn’t offer any surprises.

It might have been possible to produce something with a little more finesse, but for the price it gets the job done. Though there is a whirr produced, it is only occasionally distracting, and four power levels are offered.

Of course, I can speak to only the UK version: the US model has a much more powerful 750W motor and goes faster.

The maximum speed of the bike is 15.5 mph in the UK and EU, increasing to 20 mph (32 kmh) in the US, with the model reviewed being the version sold in the UK and EU. Between the ride position required, the option for extra passengers to be carried and the ‘moped’ category assigned, it does feel as though the bike was designed for those who want ‘electric’ performance over ‘traditional’ performance.

If you are looking to use the bike with the highest power setting on to whizz to the shops and don’t plan on taking longer rides, the RadRunner 2 will suit you well. If you are looking for something to use for off-road riding or for longer road journeys, there are better alternatives.

With a quoted range of up to 88 km/45+ miles, range would seem to be a particular strength of the RadRunner 2. But of course the picture changes in the real world. Lots of factors can affect how many miles the battery will transport you, including the temperature, the ride load and the rider weight.

With these in mind, although the RadRunner 2 can’t reach anything quite like the quoted maximum length, we managed around 30km (19 miles) before the battery needed a recharge. This will be enough for many commutes, but those needing more endurance should probably look elsewhere. A full charge of the battery took roughly five hours to complete.

The RadRunner 2 is available directly from Rad Power Bikes with prices starting at $1499 / £1349.

Starting at are the operative words here. As Rad Power Bikes is keen to point out, there are dozens of accessories you could buy, from front racks and baskets to kids’ seats and passenger grab handles, plus the LCD upgrade and passenger seat mentioned earlier. These can add significantly to the price, even if it is nice to have the options there.

If you want to know what the alternatives are, well, you’ll be hard-pushed to find any other utility bikes at this price.

Those in the UK might look at the slightly more expensive £1399 Raleigh Array which has more conventional styling, a superior quoted range, an OLED control panel and should be more widely repairable.

There’s also the Carrera Impel from Halfords which starts at £1000, has a bigger quoted range, and a number of customisation options.

For more, read our roundup of the best electric bikes.

Releasing any device, let alone an e-bike, that tries to do everything is a tricky task. Chances are that while it will do a few things well, it will never quite live up to their promise in the long run.

I’m well aware that other reviewers have loved the RadRunner 2 (mainly in the US, it has to be said). For me, in the UK, this jack-of-all-trades is a master of none.

If you specifically want a utility e-bike to replace your car for short journeys – maybe to the shops or to take a child to school – then it will carry your cargo happily, and has a comfortable ride and sturdy, reassuring tires. But if you’re considering it for commuting, it is just too heavy and may well not offer enough range. Those who prefer off-road riding will want something with gears.