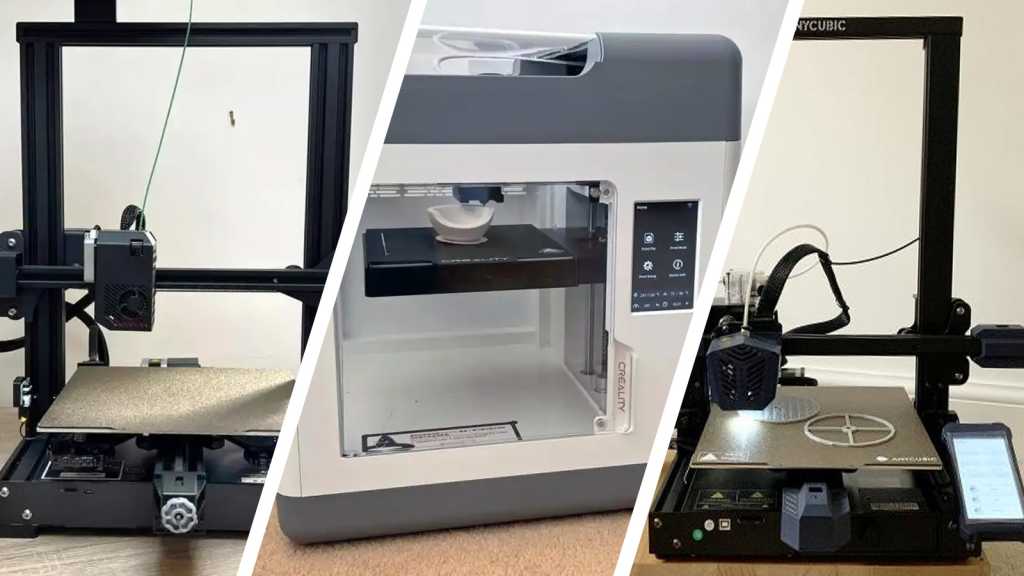 Even though affordable 3D printers have been around for many years, they’re still a rare sight in people’s homes.

There are a few good reasons for this. First, not many people feel they need a 3D printer. Unless you’re going to set up a side hustle 3D printing things to sell, you’ll probably struggle to think of half a dozen things you can usefully print.

The other is that they’re not exactly automatic. Unlike, say, an inkjet printer which you can plug in and immediately print a photo or a Word document, a 3D printer needs setting up before it will successfully print anything at all. You can make your life easier by choosing carefully and getting one with automatic bed levelling – true auto levelling, that is.

There’s a third reason: consumer 3D printers are single-colour devices. They have one nozzle and can print one colour at a time. You can stop a print, load a different colour and continue, but because of the way that they print one layer on top of the previous one, colours can only change throughout the height of the thing you’re printing.

Printers with multiple nozzles exist, but they’re far too expensive for most consumers to justify buying.

Then there’s the speed. Even a small object can take several hours to print and large ones a day or two. There are ways to speed up any printer, but none of them are both cheap and simple.

Finally, until you’ve spent time getting to grips with a 3D modelling app such as Adobe Fusion, you’ll be limited to printing objects that other people have designed. There are lots of them, but if you want something bespoke, you’ll have to create it yourself, and that has its own steep learning curve.

However, none of this is supposed to put you off buying a 3D printer. Far from it: choose wisely and you’ll be rewarded with a device that can print intricate, articulated models from the off.

Just be prepared for some tinkering and don’t have sky-high expectations.

We’re focusing mainly on FDM (fused deposition modelling) printers here because these are the most popular type. The other type is a resin 3D printer, which works very differently, and are designed for printing small, intricate, solid models. 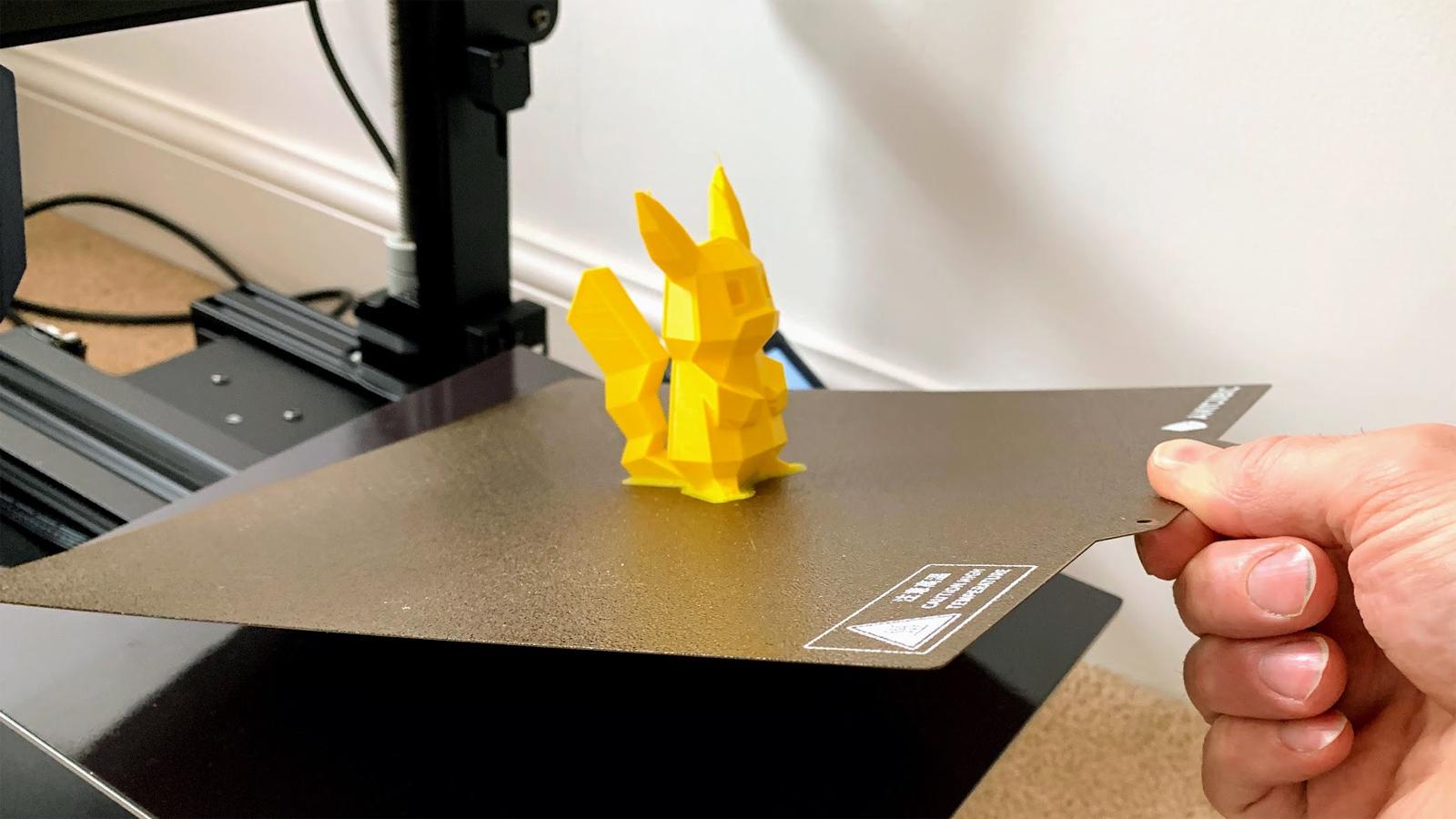 You tend to get what you pay for with 3D printers, and the Vyper sits right in the sweet spot. It ticks all the right boxes: (proper) auto levelling, a touchscreen, a PEI sheet and a decent build volume of 240x240x265mm.

For most people, the Vyper offers good-enough quality at a sensible price with reliable first layers every time. 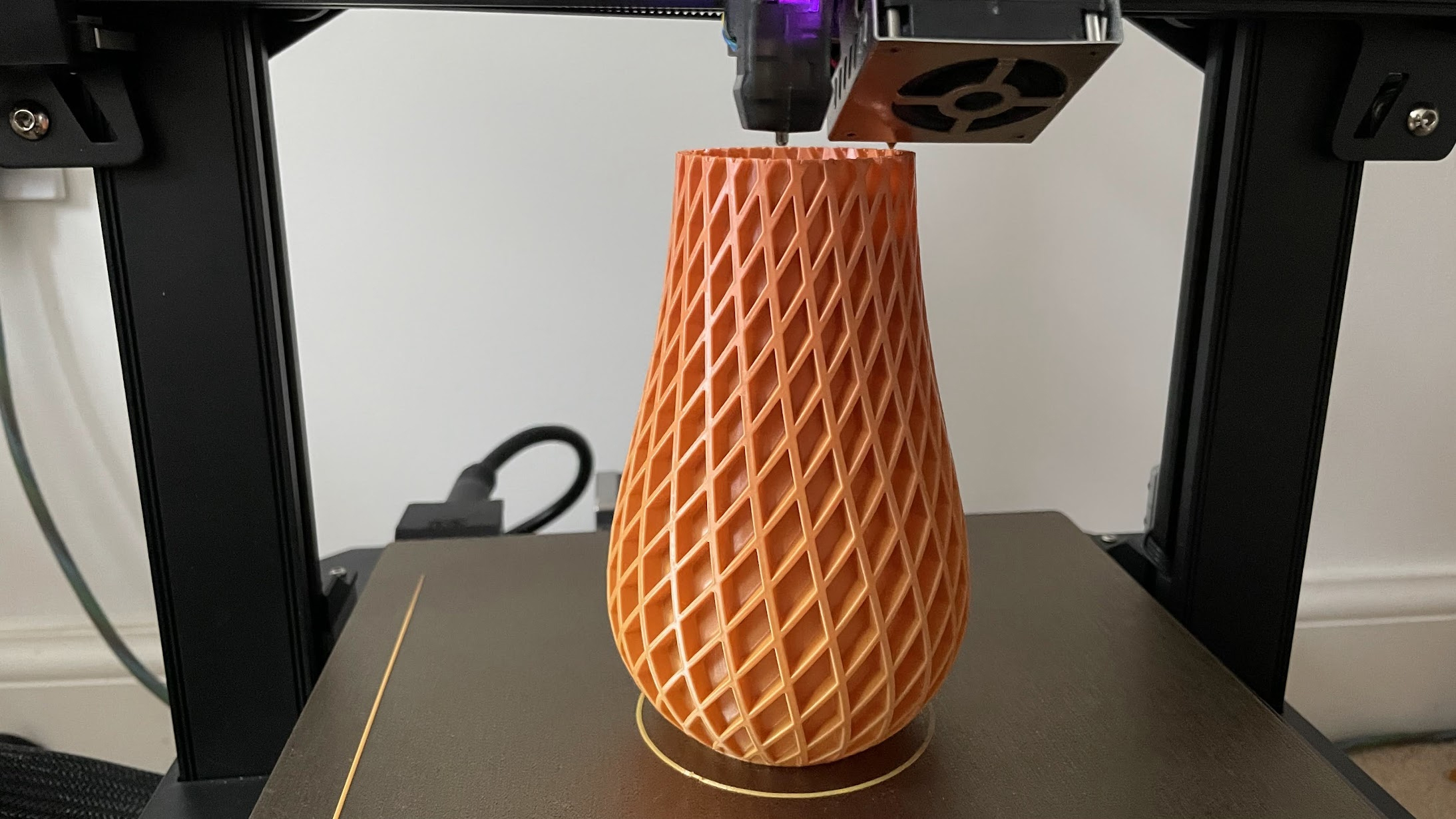 The S1 Pro might not be the budget 3D printer you’d expect from an Ender 3, but that’s because it has had all the bells and whistles thrown at it. 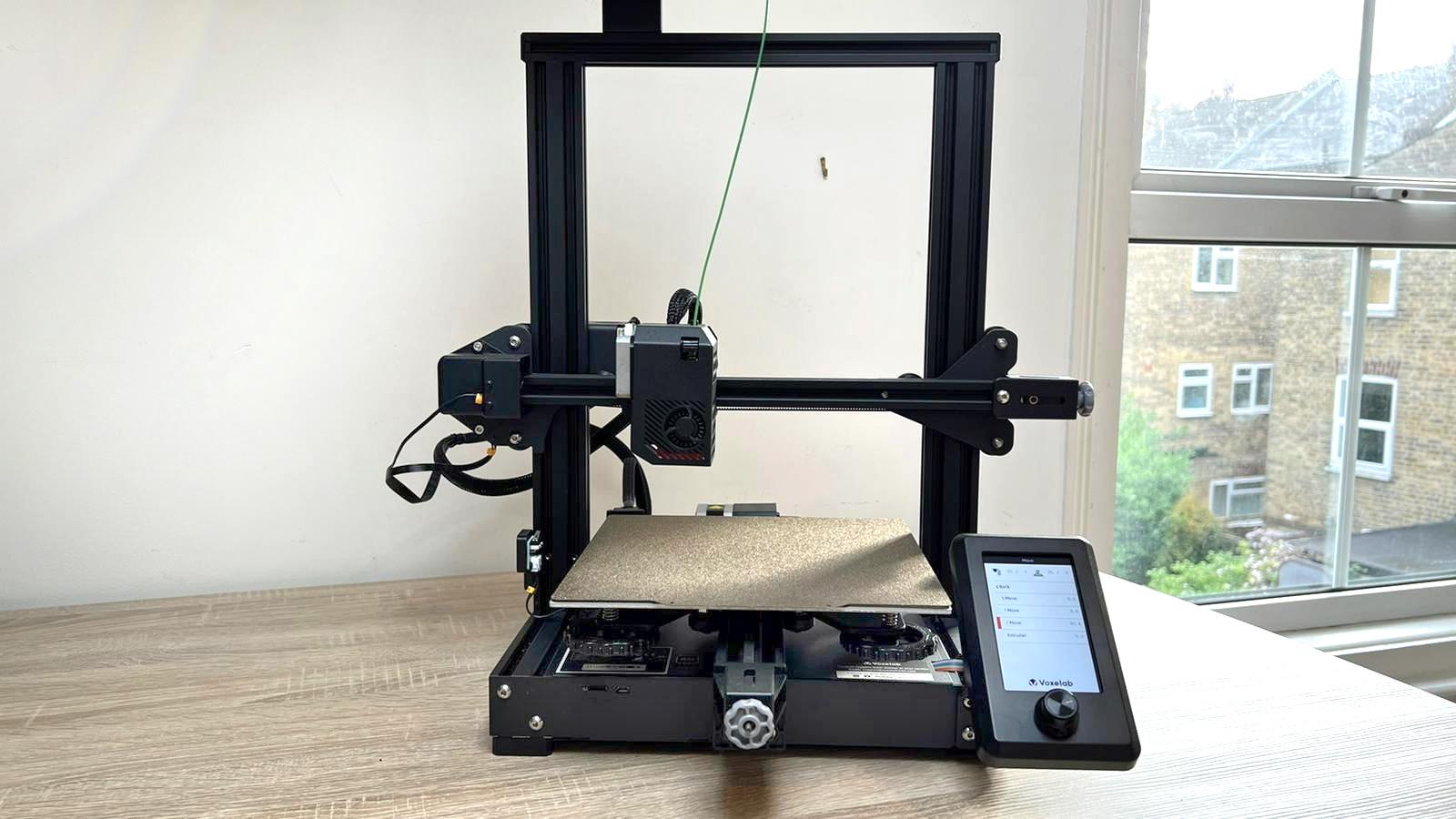 The Aquila S2 is a less expensive alternative to others here, but still has most of the features you’d want, including a PEI sheet that helps prints to stick while printing, but makes it simple to remove them afterwards.

You can print with a variety of materials, including PETG, thanks to the fact the hotend can reach 300°C and the bed 100°C.

Bed levelling, though, is manual, and there’s no touchscreen: the colour screen is operated using a knob.

When you’ve levelled it, though, prints are great: we had success with several print-in-place models, but like most of the printers here, you may find intricate models require a raft to succeed.

4. Creality Halot One Plus 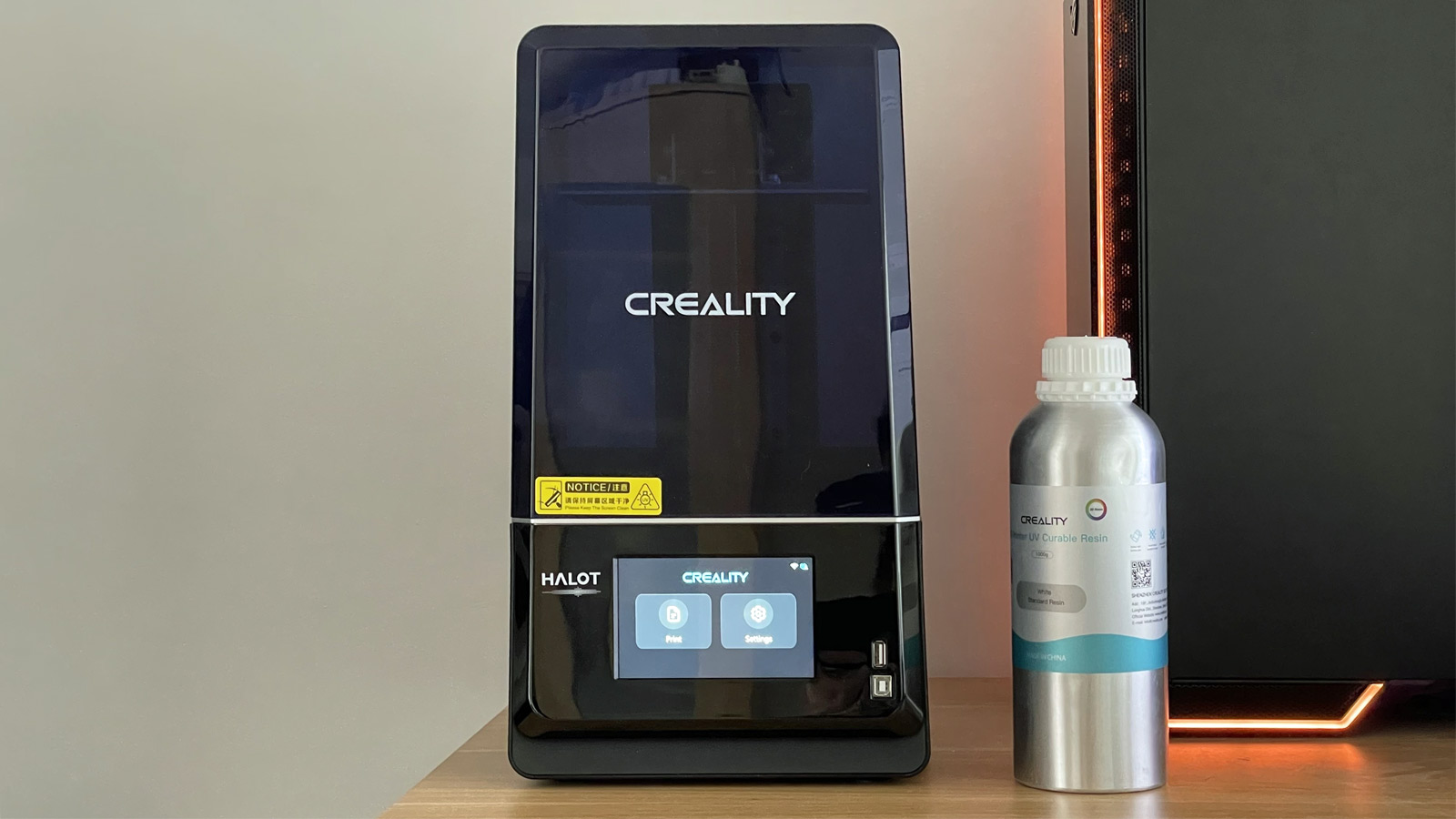 The Halot One Plus is an easy-to-use resin 3D printer that has a good-sized build volume, prints reliably and at high quality. It’s quite expensive compared to rivals, especially in the UK.

The Halot One Plus is a resin printer, so is very different to the others here. Instead of using filament on a reel, it prints using liquid resin which is cured, layer by layer, using UV light.

Build volume is smaller than the FDM printers here, but it’s still relatively large for a resin printer, and the screen’s high resolution means models have lots of fine detail.

The Halot One Plus printed ultra-reliably in our tests, but if you are keen on a resin printer, bear in mind that you have to clean up prints afterwards, which usually means buying a separate washing and curing device that looks a lot like a resin printer and takes up the same amount of desk space.

Read our full Review Creality Halot One Plus 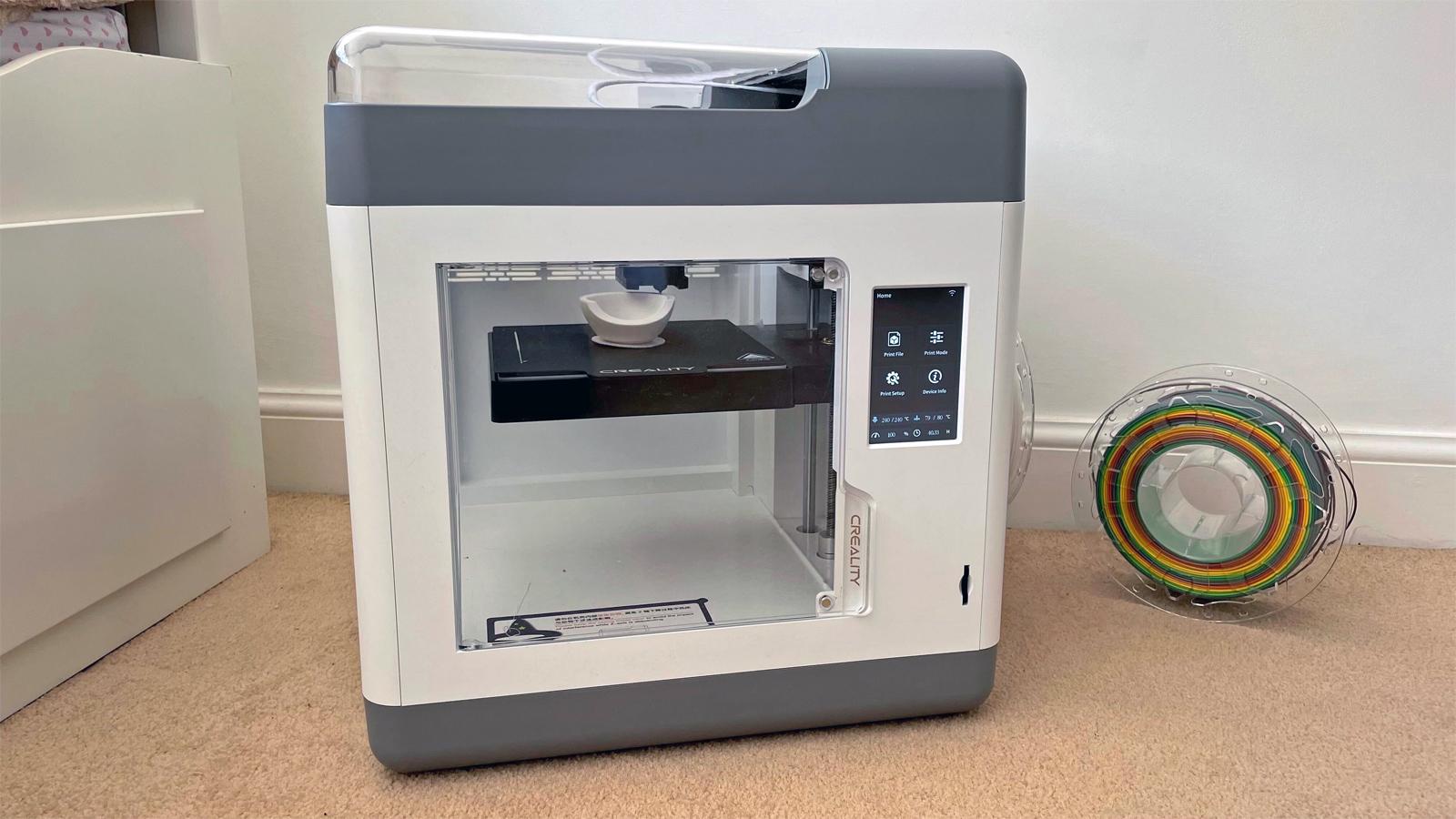 Most 3D printers are open, but the Sermoon is fully enclosed. This, and the fact it has a touchscreen interface designed for beginners, means it’s well suited to kids.

There’s a safety feature that pauses printing when the door is opened, but the enclosure also means you should be able to print with warp-happy materials more easily.

However, that isn’t quite the case as the heated bed can reach only 80°C, but you really need 100°C for ABS.

The build volume of 175 x 175 x 165mm is smaller than others here, but there is a built-in camera so you can keep tabs on your prints when you’re not in the same room, and an LED strip lets you see what’s printing.

If you’re after a 3D printer that arrives fully built and is relatively simple to use – and you mainly want to print using common PLA filament, it could be ideal. The main issue is the high price, but if that’s not a hurdle, then it’s a decent choice.

Since printers all tend to look the same at first, here are some things you should look out for when choosing.

Unless the surface on which objects are printed is perfectly level, prints won’t stick to it and will fail sooner or later.

Manual levelling is a chore you could probably do without, so go for a printer with auto levelling. But be careful. Some printers claim to have auto levelling, but rely on you to do a lot of the work. Which is why it pays to read reviews as well as knowing what to look for.

Almost all 3D printers have them, but a few still don’t. A heated bed will help prints to stick: don’t buy a printer without one.

When prints do stick, they can be difficult to remove from the bed. A PEI (polyetherimide) sheet helps immensely.

Instead of a glass sheet, a flexible metal sheet with a textured coating is used, and held in place with a magnet the full size of the print bed. When the model finishes printing, you simply lift the sheet off, flex it and the model pops off.

The cheapest, most basic 3D printers  use a monochrome screen with a rotary dial. Go more up market and you might get a nicer colour LCD screen, but if you can, get a printer with a touchscreen as it’s so much quicker and easier to use.

A printer’s build volume tells you how big an object it can print. Assume that the actual volume is a bit smaller than the specifications, and go for one with a slightly larger volume than the biggest object you will need to print.

It can be hard to know this, and remember that a bigger volume means a bigger printer, which you’ll need space for.

Really large models have to printed in sections and glued (or otherwise fixed) together, but build volumes do vary.

Most people print using PLA, the most common type of filament. All 3D printers have nozzles that go up to the 220°C or so that PLA requires. But if you want to print with ABS, PETG or another type of plastic, be sure to opt for a printer that can go up to around 300°C.

Similarly, watch out for heated bed temperatures. Some won’t go beyond 80°C, but you’ll need 100°C or more for successful ABS prints.

With large models taking many hours to print and the fact that you can’t always know if there’s enough filament left on the reel to complete it, a run-out sensor can be a life saver. It does it what it says: detects when the filament runs out and halts printing automatically, allowing you to load a new reel and carry on printing.

Without one, the filament could run out and the printer will carry on printing thin air, and you’d be none the wiser.