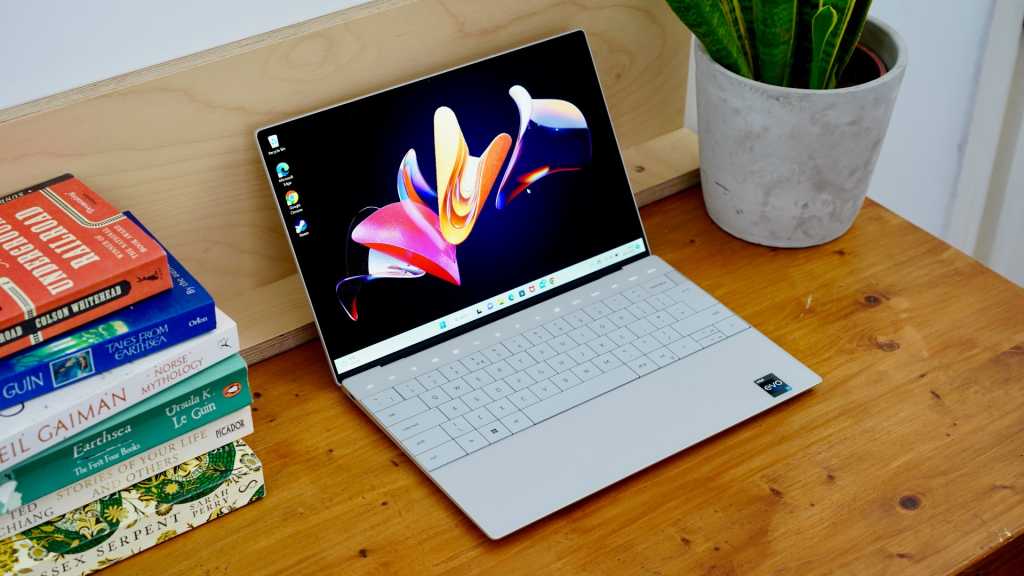 The new XPS 13 Plus model offers a beautiful design, the edge-to-edge keyboard is an absolute triumph, and the OLED display is an eye-bathing treat. It’s not the most practical laptop for serious or power users, however, thanks to underwhelming battery life, a poor port selection, and a needlessly gimmicky approach to function keys.

After a couple of years of relatively minor spec updates, Dell is back with a completely redesigned ultrabook offering in the Dell XPS 13 Plus. I don’t think it’s too much of a spoiler to say at the outset that it’s downright gorgeous.

Featuring a true edge-to-edge keyboard, tiny display bezel, an invisible haptic touchpad, and capacitive function keys, it’s a bold new aesthetic that largely pays off. But can Dell maintain its admirable reputation and produce an ultrabook that performs as well as it looks?

The Dell XPS line has always been hot on performance (and often just plain hot), so we won’t consider it job done unless the new XPS 13 Plus is as competitive in use as it is easy on the eye.

I’ve given the game away somewhat, but you can already see the evidence from the images. The Dell XPS 13 Plus is a bit of a looker.

Dell’s new design pushes the keyboard right up to the edge of the frame, leaving it feeling nice and spacious whilst the laptop itself feels pleasingly compact. I’m less keen about the switch to a capacitive function key bar, but we’ll deal with that in more depth in the relevant section. Superficially, at least, it’s great.

The XPS 13 Plus isn’t spectacularly slim or lightweight for a 13in laptop, but it’s not even close to being hefty either. At 15.28mm it’s a little slimmer than the Huawei MateBook X Pro, and at 1.26kg it’s a little lighter, too.

One other point worth noting here is that the OLED model is slightly heavier than the LCD. If you’re after a more compact OLED laptop, you might want to check out the Asus ZenBook S 13 OLED.

Build quality is almost unimpeachable, with a solid metal frame and Dell’s signature soft-touch finish combining rigidity and comfort. The latter smooth finish around the keyboard, combined with the light grey shade of the typing surface, does seem to grubby up with greasy prints pretty quickly, however.

Unfortunately, Dell hasn’t used this revamp to rethink its port provision. If anything it’s gotten worse, with just the two USB-C ports, one either side. Both support Thunderbolt 4’s top-notch speeds, but there’s no microSD slot and no USB-A, nor is there even a 3.5mm jack for plugging headphones in.

For an ultrabook with Pro pretensions (though perhaps tellingly not a Pro name), it’s a bit of a shame and you’ll almost certainly need a USB-C hub.

I also found that the display hinge was weighted a little too much on the heavy side, meaning the whole laptop would slide back when I tried to open it one-handed on my desk. It’s a small detail, but a meaningful one in a premium laptop that you’re going to be opening and closing hundreds of times throughout the year.

As we’ve already discussed, Dell has really changed things up in the keyboard department. It has achieved its tight edge-to-edge squeeze by removing all the in-betweeny bits, or the lattice to give it a more official term.

Despite this fat-trimming exercise, typing never felt like a chore, and I was able to transition from a classic MacBook chiclet keyboard without any issue at all. Part of that is because of the size of the keys – they’re nice and large – and part of it is because the feel and travel of the keys are both spot on.

I’m less keen about the switch to a capacitive function key bar. Just as the mechanical feel of the physical keys really sells Dell’s new approach, so too does the lack of feel in the function key bar scupper its chances of success. The disconcerting lack of feedback when attempting to Print Screen illustrates the point.

Some touchpad-like haptics would be a worthy addition if Dell decides to stick with this approach. It is undeniably cool how pressing the Fn key switches the lighting to highlight the secondary function, though.

The decision to make the touchpad invisible would appear to be another questionable decision at first, seemingly favouring style over substance. In practice, however, I found it to be surprisingly easy to operate, with the space bar serving as a subtle indicator of its limits. It helps that the touchpad itself is of high quality, with decent responsiveness and strong haptic feedback.

For biometric authentication, you get both a fingerprint sensor mounted in the power button, and an IR camera that activates when you lift the lid for Windows Hello. I was glad of the fingerprint sensor provision, as the IR camera proved to be a little hit and miss, especially in lower lighting.

It’s a shame to see a mere 720p webcam here. Evidently, that skinny bezel has come at a cost, and that cost is a suitably sharp image of your mug during Zoom calls.

I was sent the range-topping model for this review, which comes with a 13.4in 3456 x 2160 (aka 3.5K) OLED touch display. You can also specify the XPS 13 Plus with an Full HD+ LCD or a 4K LCD, with the former also coming in a non-touch specification.

All display options are 60Hz, so this isn’t a laptop that’s particularly amenable to gaming or dealing with high frame rate video content. It’s not a huge issue by any means, though it’s worth noting that the Huawei MateBook X Pro (2022) does give you a 90Hz display (albeit only LCD), so it’s a slight shame to see Dell not offering a similar option somewhere in its new line.

Of course, it would need to address the XPS 13 Plus’s battery life issues before it could entertain such an idea but we’ll get to that in good time.

The screen on this OLED model is a joy to behold. It’s packed full of pixels and is suitably colour-accurate, with an sRGB gamut coverage of 94.2% against a gamut volume of 98.6%, and an average Delta E of 1.35 (the closer to 1 the better). HDR is supported, though it’s off by default, so you’ll need to activate it in the Settings menu. Be warned though, battery life will take a hit.

It’s not the brightest display on the market, but a peak brightness of around 450 nits should be perfectly sufficient for normal indoor scenarios and some outdoor. It’s a touchscreen panel, too, so you can go hands-on with Windows 11 if that’s your preferred method of interaction.

On the audio side, Dell has provided two tweeters and two 2W speakers. They’re clear and loud, if a little lacking in depth and low end punch compared to the MacBooks of this world.

Dell has equipped the top model of its new XPS 13 Plus range with a 12-core Intel Core i7-1260P, with integrated Intel Iris Xe graphics. There is no discrete GPU option. This range-topping model also gives you a generous 32GB of RAM and a 1TB SSD.

It’s a capable enough set-up for a productivity-focused 13-incher, or at least it is when the laptop is running suitably cool. Unfortunately, like its predecessors and particularly the early 2020 model, starting up more intensive tasks like games, running multiple web tabs and apps, or simply plugging the XPS 13 Plus in will quickly ramp the fan up as the machine grows a little toasty.

The fan noise isn’t too obnoxious, but it’s almost constantly there, even during relatively light usage.

In benchmarking terms, the XPS 13 Plus performs well against some of its rivals, absolutely smashing the likes of the Huawei Matebook X Pro and the Asus ZenBook S 13 OLED in Geekbench 5 multi-core terms, and getting impressively close to the MacBook Air M2.

In PCMark 10, which attempts to simulate realistic workloads, it’s competitive with the Huawei MateBook X Pro (late 2022), and it falls a little short of the Asus ZenBook S 13 OLED (2022). It’s a similar story with the GPU-focused 3DMark Night Raid test.

In our standard looping 720p video test, the XPS 13 Plus only lasted 7 hours and 14 minutes, which falls more than four hours short of the Huawei Matebook X Pro. You can’t pin this poor result entirely on the OLED display provided here either, as the Asus ZenBook S 13 OLED lasted well over twice as long in the same test.

This is with the default set-up of Balanced battery mode, and with HDR switched off. Flick that HDR switch on for the full gamut of display colours, and the looping video result dips to 5 hours 28 minutes.

In practical terms, the simple fact is you won’t be able to get through a full working day with the Dell XPS 13 Plus on a single charge. I found that a morning of largely Chrome-based work tasks (word processing in GDocs, a podcast, and several other active tabs) with some light communication app usage (WhatsApp, Mail, and Slack) and a couple of 10-minute YouTube videos emptied a full tank in 3 hours and 40 minutes.

That’s a bit of a problem in a compact laptop that’s otherwise built for comfortable long-term usage, and I’d implore Dell to consider upping its battery life game in future revisions.

With 30 minutes of charging from the supplied 60W charger, the XPS 13 Plus got it up to 25%. That’s not one of the quicker charging rates we’ve come across in a laptop of this kind. The Huawei Matebook X Pro will hit double that percentage using its significantly faster 90W charger, though that’s an exceptionally speedy result.

The Dell XPS 13 Plus ships with Windows 11 Home, as you’d expect. You also get some pre-installed apps that will either be welcome time and labour-saving inclusions or irritating bloat, depending on your proclivities.

To my mind, this list of preinstalled apps is mostly defensible, including the commonly used likes of TikTok, Instagram, Spotify, Whatsapp, Disney+, and Amazon Prime Video. You’ll also have to put up with McAfee antivirus bugging you to upgrade from time to time, but that’s hardly unusual.

With three different processors, three RAM capacities, four SSD sizes and four screens, there are a lot of possible SKUs.

You can buy Dell in the US as well as Amazon and Best Buy.

In the UK, you can get the XPS 13 Plus from Dell, Amazon, Currys, John Lewis, Box, Very and Laptops Direct.

Check out our chart of the best laptops to see more options.

The Dell XPS 13 Plus represents a bold and largely successful redesign of a popular and highly regarded premium compact laptop. The new edge-to-edge keyboard is as easy on the eye as it is a delight to type with, while the invisible trackpad proves surprisingly functional. Meanwhile, the addition of a sharp 3.5K OLED display option makes for a stunning media canvas.

Not every redesigned element works, with the capacitive function bar, in particular, coming across as innovation for innovation’s sake. There are more pressing issues elsewhere, with a critical lack of ports and disappointing battery life key among them. The machine also continues the XPS tendency to run a little hot and loud, too.

All in all, the Dell XPS 13 Plus represents an exciting evolution for the series and one of the very best 13in laptops out there for writing and for media consumption. Power users might want to wait for a revision that concentrates a little more on some of the down and dirty practical concerns, however.