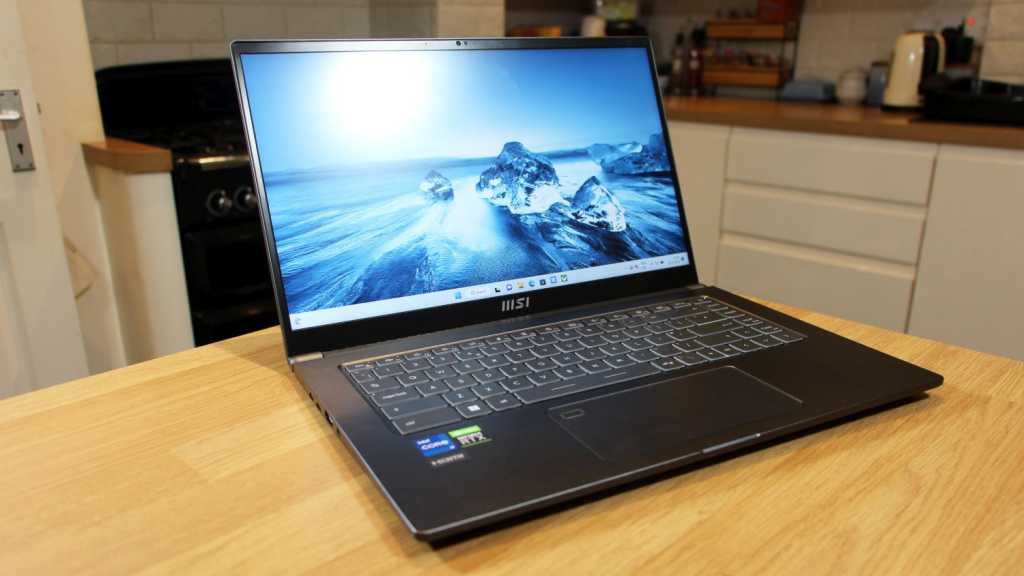 The MSI Prestige 15 delivers good performance, has a great keyboard and lots of connectivity, all wrapped up in a stylish design and offered at a competitive price. But if you look elsewhere you’ll easily find laptops with better displays, more robust build and even better performance.

You’d expect to spend loads to get a laptop that delivers huge amounts of power and a head-turning design, but the MSI Prestige 15 claims to fit the bill while costing just $1,302 in the US and £999 in the UK.

To get the job done, the Prestige 15’s exterior boasts diamond-cut edges and sandblasted textures. On the inside you’ll find one of Intel’s latest processors alongside dedicated Nvidia graphics.

When more of us than ever before are blurring the lines between home and work – and when more people use the same laptop for both – it’s important to have a one that can tackle every task.

Given that situation it’s unsurprising that the MSI faces some strong contenders. The Dell XPS 15 starts at $1,399 in the US and £1,399 in the UK, and the Huawei MateBook 16s costs £1,299. Can the MSI Prestige 15 claim a spot on our best laptop chart?

MSI’s big talk about design translates to an unfussy aesthetic. Those diamond-cut edges are clean and gently curved, and you won’t find any extraneous design touches – the Prestige is minimal and classy.

It’s available in grey or silver shades – both of which have a matte, slightly shimmering quality – and it’s made from aluminium and plastic. The screen folds right back so it’s flat against the desk , but it doesn’t have the drop-hinge design you’ll find elsewhere.

The left-hand edge has two Thunderbolt 4 ports and an HDMI 2.0 output. On the right-hand edge, there are two full-size USB ports and a microSD slot. Above the screen there’s a 720p webcam that offers Windows Hello, but only middling image quality.

That connectivity compares well to rivals. The Huawei only has one Thunderbolt 4 socket and no card reader, while the Dell includes an SD slot but no full-size USB connector, something many people still want.

MSI’s notebook does well on the scales, too. The Prestige weighs 1.69kg, is only 18.9mm thick and 357mm wide. The Dell and Huawei machines are slimmer and narrower, but they’re heavier than the MSI.

The Prestige 15’s big weakness is stiffness. Its screen is sturdy enough, but the base feels weaker – the area beyond the keyboard is easy to depress and it doesn’t take much force to flex the entire base.

MSI says the laptop has been through MIL-STD-810G testing, so should withstand shocks, drops and falls, but the fact remains: it just doesn’t feel robust. And it isn’t the first time we’ve said this. We noticed it on the Prestige 14 Evo as well, and it clearly hasn’t been addressed.

Nevertheless, the Prestige 15 should survive commutes and household life and elsewhere the MSI combines sleek, attractive design with solid connectivity, so it’s a good start.

Start typing and you’ll soon forget about the flexing base. The buttons have a decent 1.5mm of travel, and the typing action is excellent: crisp, fast, and easily comfortable enough to withstand entire days of typing. The backlight is bright, and it easily matches Dell and Huawei’s hardware.

Our only disappointments concern the layout. On a positive note, you get extra Page Up and Page Down keys and full-size cursor buttons. Negatively, there’s no number pad, the Return key is single-height – very annoying if you regularly swap between a desktop PC keyboard and a laptop – and the Function key is tiny. The key presses are quite loud, too.

The trackpad is inconsistent. It’s wide, smooth and includes a fingerprint reader, but its mechanical design means clicks at the bottom are too soft and deep, and they require too much force at the top.

We’ve got not complaints about quality. The brightness of 339 nits is good enough to for indoor and outdoor use in most situations, except when it’s really sunny and bright, That figure pairs with a black point of 0.27 nits to give a contrast ratio of 1,256:1.

That rock-solid result means you get ample depth in dark areas and plenty of vibrancy everywhere else. The Delta E of 1.16 is excellent, too, and means accurate colours.

It’s worth remembering that the MSI Prestige 15 is a relatively affordable laptop, though, and it has limitations. It renders 90.1% of the sRGB colour gamut and little more than 60% of the Adobe RGB and DCI-P3 colour spaces, so it’s ok for most things but not for tasks where you have to be absolutely precise with colours. Usually, we’d expect a screen like this to manage 100% sRGB.

Similarly, its 60Hz refresh rate is only suitable for single-player games and casual e-sports play.

Rivals have better screens. The Dell XPS 15 uses a 16:10 aspect ratio to deliver a little extra vertical space and, at 500 nits, is brighter. The Huawei’s 3:2 aspect ratio and 2520 x 1680 resolution mean you get more space and sharper definition.

Don’t expect much from the speakers, either. The 2W units offer decent mid-range clarity and they’re not tinny, but they’re not bassy or particularly loud. They’re fine, but that’s it.

Intel’s Core i7-1280P is an Alder Lake-P chip designed for slimmer, lighter laptops. It’s the most powerful chip in this particular range, so you get six Performance cores with a 4.8GHz top speed.

Elsewhere, the MSI’s specification is ordinary. There’s only 8GB of sluggish DDR4 memory, and it’s soldered to the motherboard so upgrades are impossible. The SSD’s read and write speeds of 6,831MB/s and 5,096MB/s are good, but its 512GB capacity will be exhausted after a few game installs. However, if you’re not a gamer, capacity shouldn’t be a big worry.

The GeForce RTX 3050 is Nvidia’s entry-level mobile graphics chip but MSI has chosen to ‘de-tune’ it for the Prestige 15 where it uses up to 40W of, rather than the 80W these chips can run at in other laptops. It’s also worth remembering that the performance of the mobile RTX 3050 won’t be as good as a full-size RTX 3050 graphics card in a desktop PC.

The Prestige 15 packs Wi-Fi 6E and Bluetooth 5.2, but there’s no wired Ethernet port.

The MSI easily handles day-to-day office tasks and web browsing, and it’s got the ability for light creative workloads, like photo editing. You should only spend more on an i7-12700H laptop if you need multi-core ability for tough creative tasks such as editing 4K video.

The MSI’s PC Mark 10 result of 6,473 is excellent and further underpins the Prestige’s prowess in everyday tasks. It’s not particularly noisy and doesn’t get hot, either.

In terms of 3D performance, the MSI isn’t half bad for a laptop that doesn’t bill itself as a gaming one. It handled Far Cry New Dawn’s Ultra graphics settings at a solid 63fps. It’ll play any e-sports title – it ran Rainbow Six Siege at 182fps – even if you’ll need to output to a 144Hz screen to really enjoy competitive gaming.

Don’t expect to run the most challenging games, though – the RTX 3050 could muster only 42fps at Cyberpunk’s Medium settings.

Batter life is respectable. In a work benchmark the MSI lasted for nearly twelve hours, and it played video for almost as long – results that barely differ from the Huawei and creep ahead of the Dell. Unless you’re really working the processor and GPU, the Prestige 15 should make it through a whole day away from mains power.

The MSI Prestige 15 costs $1,302 in the US and £999 in the UK. The American model has the marginally faster Nvidia GeForce RTX 3050 Ti graphics and a slightly slower Core i7-1260P processor, but there’s no significant difference in day-to-day use.

Unlike in the UK, no alternative specifications are currently available in the US, so the solitary model is available from Amazon, Walmart, the MSI Store and Excalibur PC.

If you’re in the UK, you can save cash with different configurations. For £699 you’ll get a Core i5-1240P processor, and for £781 you can combine that less-powerful CPU with RTX 3050 Ti graphics.

You can buy these from Scan, Laptop Outlet, CyberPower and Ebuyer.

The MSI is trickier to recommend in the US. The Dell XPS 15 price at the time of writing costs $1,399 for a Core i7 model – and that laptop has a better display. The Huawei isn’t sold in the US.

For more alternatives, take a look our roundups of the best laptops and best budget laptops to see all the top options.

Ultimately, the MSI Prestige 15 – despite its lower price – competes with more expensive laptops on processing performance, keyboard quality and connectivity. You can play games on it too, so long as you don’t expect to be putting everything on Ultra quality. Battery life is very reasonable and, if this matters to you, it’s also lighter than some of its competitors.

What we didn’t like so much was the inconsistent build quality, the fact the screen is very average, and that you can get better performance from similarly priced alternatives.

The bottom line is that you shouldn’t overlook the Prestige 15. It’s a capable, lightweight all-round laptop at a good price, so it’s an impressive option that won’t break the bank.