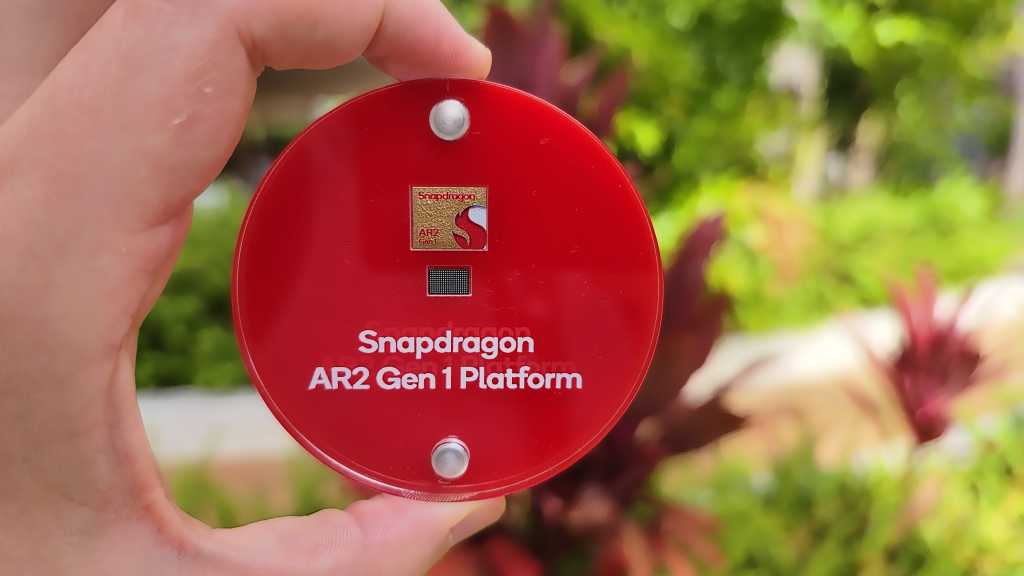 Hot on the heels of yesterday’s announcement of the Snapdragon 8 Gen 2 mobile chipset, Qualcomm has followed up with its first dedicated chipset for augmented reality headsets: the AR2 Gen 1.

The chip inherits its confusing name (no, we don’t know what that ‘2’ is there for either) from the existing Snapdragon XR2 and its follow-up XR2+ Gen 1, which are designed for more powerful mixed reality and virtual reality headsets like the recent Meta Quest Pro.

By contrast, the AR2 Gen 1 will feature in lightweight AR devices, the type designed to look and feel more like traditional eyewear than a bulky headset.

Support for the chip has already been promised by companies ranging from smartphone giants Xiaomi and Oppo through to XR experts Pico and Nreal.

Unlike some existing AR systems, the AR2 Gen 1 is split into multiple parts. The 4nm main processor can sit in one arm of the glasses, with a connectivity unit on the other side (including futureproofed support for Wi-Fi 7) and a smaller co-processor in the central bridge.

Qualcomm says this design reduces the number of wires that need to cross through each hinge – one of the biggest factors in how bulky and heavy AR glasses tend to get. It also keeps the main processor 40% smaller than on the XR2, another step towards smaller glasses overall.

Smaller batteries should be an option for manufacturers too, with the AR2 Gen 1 optimised for low power use, theoretically enabling glasses that run on just 1W of power.

Of course, augmented reality is still waiting for the consumer boom promised years ago by the failed Google Glass, though industrial use cases have proven more popular.

This new chip likely won’t be enough to spark the fledgling market into life – it might take Apple’s long-rumoured AR glasses to do that – but it’s a step in the right direction, and further cements Qualcomm’s lead in the market.

Alongside the AR2 Gen 1 platform, Qualcomm also announced a pair of new audio chipsets for headphones and Bluetooth speakers – the S5 and S3 Gen 2 – alongside a tease of a new CPU line, Oryon, the first output from its purchase of CPU designer Nuvia last year. That may herald more ambitious plans for laptops and even desktops, but with only the name announced so far, we’ll have to wait until the first product announcements next year to find out more.