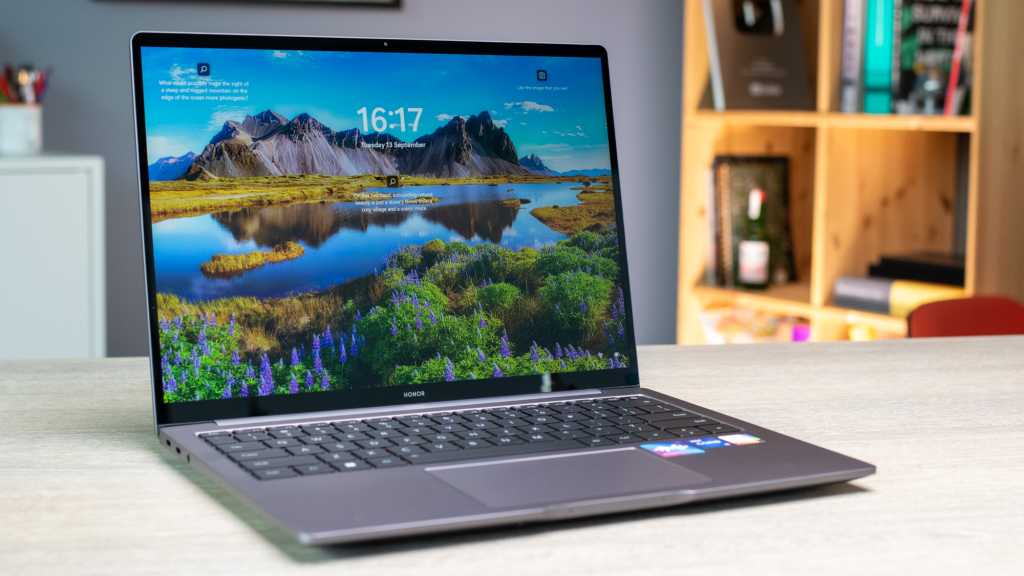 Dominic Preston / Foundry
At a glance

The Honor MagicBook 14 (2022) is as practical as it gets. Plenty of power (including an optional RTX GPU), long battery life, and a diverse set of ports make this a sensible option for students and workers who prioritise performance.

Honor inherited a lot from former parent company Huawei, but one underrated element of that is a knack for quietly capable laptops.

The MagicBook range is reliably capable and affordable – never the plushest or most premium laptops around, but always excellent value.

That hasn’t changed with the 2022 refresh of the MagicBook 14, which delivers impressive power and longevity while skirting the lower edge of the premium price bracket thanks to a no-frills design.

If there’s a word best-suited to the MagicBook 14’s design, it’s probably ‘functional’.

I don’t want to do the laptop dirty too much, but ultimately this is an aesthetic that tilts firmly away from form, without ever straying too far towards becoming unattractive.

Only available in a grey finish, the MagicBook 14 is built from an aluminium alloy that means it feels sturdy and solid by laptop standards. The downside is that at over 1.5kg it feels heavy for it – not so much that it’s burdensome to carry in a backpack, but enough that you’d hesitate to call it lightweight.

A tapered design means that the whole package still feels pretty slim and compact despite the 14in display, though the bezel round the display is a little thicker than you might find in some rivals around the same price.

Ports are another strong point here. Along the left side you’ll find a pair of USB-C 3.2 ports, either of which can be used for charging too, alongside the 3.5mm headphone jack. Alongside there’s a welcome USB-A port (an increasing rarity in laptops) along with a real oddity: a full-size HDMI port.

Ultimately, this is a simple, solid, grey slab of metal. It feels tough and looks professional, and for plenty of people that will be more than enough – but if you want something more striking, you’ll have to look elsewhere.

One thing the MagicBook 14 offers is a really great keyboard.

Honor has kitted it out with a full-size board, and the 1.5mm travel distance on the keys keeps them feeling fast and fluid. There’s a bit of bounce to every press, but no clickiness or mushiness. It’s great.

The keyboard also features a combined power button and fingerprint sensor, which allows you to turn the laptop on and unlock it with a single button press.

The trackpad is less impressive than the keyboard, though it’s not bad really – it’s just not all that special. It’s a comfortable size, though smaller than the touchpads on some laptops these days, but it feels like it’s made from plastic, not glass, which means there’s a little extra friction as you swipe.

Finally, above the display you’ll find a 720p webcam. This is about what you’d expect: it gets the job done on a Zoom call, but quality really isn’t great, especially with bright lights or dark rooms. There’s not all that much better out there though. It also doesn’t support Windows Hello facial recognition, which means you’ll have to use the fingerprint sensor or an old-fashioned password to sign in.

In case the name didn’t give it away, the MagicBook 14 is kitted out with a 14in display. It’s LCD, rather than OLED, but that’s no surprise at this price. It’s also limited to a 60Hz refresh rate, but again, that’s not too uncommon.

The screen’s stronger specs are its resolution – a detailed 2160×1440 – and aspect ratio – the boxy 3:2 form. This latter is increasingly common in laptops, and gives you extra vertical screen space,  which is ideal if you’ll mostly be using this to work on. The downside will be extra letterboxing when you watch movies, so this is less well-suited if it’s primarily for streaming Netflix in bed.

Setting aside the core specs, the screen here looks pretty good. It’s not tuned for perfect colour-accuracy (it only hit 72% of the AdobeRGB and DCI-P3 colour gamuts when tested with our SpyderX) but it’s bright enough to use in direct light, detailed, and will get the job done when it comes to basic creative work or the aforementioned Netflix in bed.

The dual speakers here aren’t anything to write home about, but they hold their own. For prolonged music listening you’ll definitely want to connect headphones or a speaker, but these are crisp enough for a Zoom call or podcast, which is likely where they’ll see most of their use.

The MagicBook 14 this year comes with a single CPU option: a 12th-gen Intel Core i5. It’s more powerful than it sounds though, because the chip here is the i5-12500H, which runs at a higher wattage and clock speed than the P- and U-series chips you find in most non-gaming laptops.

The result is that this is actually capable of outperforming some recent i7 laptops, and has posted some of the best raw benchmark scores we’ve seen this year. This is a powerful laptop, and don’t let the i5 badge put you off.

I’ve been testing the regular model, which uses Intel’s integrated Iris Xe graphics. If you need more power you can opt to buy a model with an Nvidia RTX 2050 included, which should add enough oomph to make this a capable machine for video editing and the like.

Whichever model you opt for, it comes with 16GB of LPDDR5 RAM and 512GB of storage – you don’t get any options here, though at least that keeps things simple.

As for wireless connectivity, the laptop includes Wi-Fi 6 (but not the more recent 6E) and Bluetooth 5.2.

Let’s start with the unambiguously good: battery life on the MagicBook 14 is excellent. When it launched the model, Honor claimed the laptop would run for 17 hours. We were, understandably, a little sceptical.

So imagine my surprise when I ran our standard battery benchmark – playing a 720p video on loop at a set display brightness – and the laptop lasted for a full 17 hours and 32 minutes. Fair play Honor.

Of course you don’t normally spend your time watching videos on repeat, but the battery holds its own in more typical use cases too. That’s harder to measure of course, but I’ve found the MagicBook 14 more than capable of lasting a full workday with juice left in the tank, which is really the threshold that matters.

Charging impresses too, though there’s some variation here, because Honor ships a different charger depending on the model you buy. Pick up the standard MagicBook 14 and you’ll get a 65W charging brick, but if you upgrade to the RTX GPU then Honor will in turn upgrade you to a much faster 135W charger.

Even this slower charger is faster than most laptops though – I got 39% of the battery back in just half an hour, and Honor says a full charge would take 95 minutes.

Better still, the laptop supports faster charging whichever model you buy, Honor simply doesn’t supply the fast charger. So if you already own a more powerful USB-C charger from another device, or buy a third-party charger, you can take advantage of the faster speeds from that without spending hundreds extra for a GPU you may not need.

The MagicBook 14 ships with Windows 11 Home, the latest version of the Microsoft operating system, so you’re pretty much getting the best software experience you can expect from a Windows laptop.

Honor doesn’t interfere with the experience too much, but does add in its own PC Manager software. This has two main functions, the first of which is to streamline firmware and BIOS updates for the various laptop components.

The second is to enable easy file-sharing and screen-streaming with other Honor devices, like phones or tablets. That means with a simple NFC tap you can share files or bring your phone display up on the laptop in its own window.

It’s great tech, and easy to use, but the big downside is that it only works with other Honor hardware. So to get the benefit you’ll have to go all-in on the company’s ecosystem – if you’re not ready to also pick up an Honor phone or tablet then you won’t get much use out of it.

The MagicBook 14 is available now in “select European markets,” which at least for the time being doesn’t include the UK – though keep an eye on Honor’s UK site. It’s also unavailable in the US, and is unlikely to ever launch there.

By MagicBook standards that’s expensive, though for the power on offer this is still a fairly competitive price. It’s certainly premium, but by staying closer to one grand than two, it undercuts a few other options on the market.

Check out our ranking of the best laptops on the market to see what else we’d recommend, or our more specific guides to the best business laptops and best laptops for students.

The MagicBook 14 will prove a good option for workers on the go who need strong performance and a lengthy battery life and are willing to forego some luxuries to get them in a relatively affordable package.

If you want a laptop that can turn heads then this isn’t it, but with a good port selection and plenty of power (in both senses) this is an eminently practical option, with plenty to recommend it.