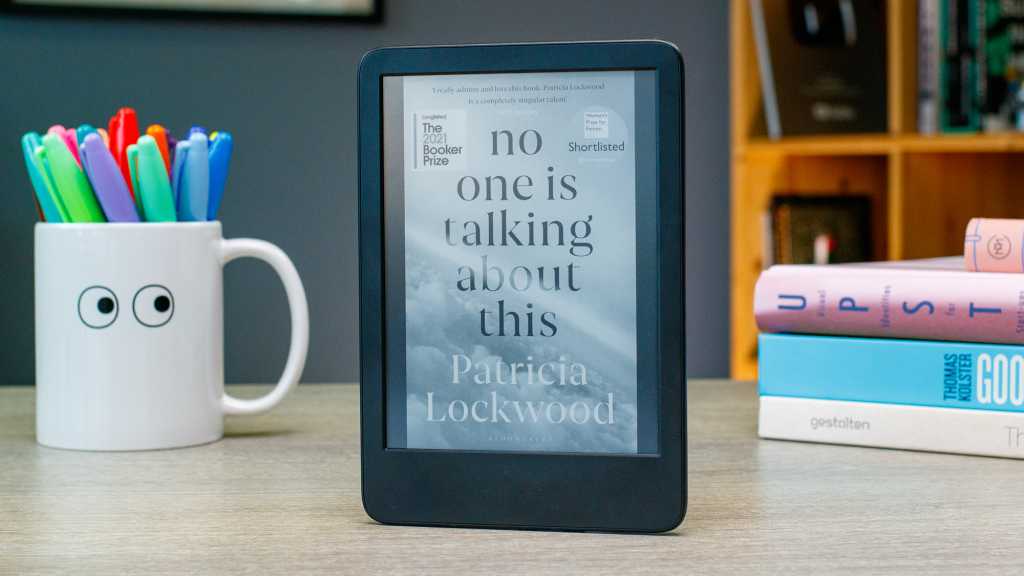 Amazon’s entry-level 2022 Kindle packs in USB-C charging for the first time and an improved display, but it’s still insulting to pay more to not see lock screen ads. It’s still the cheapest Kindle, but the Paperwhite and Kobo Clara 2E are attractive alternatives.

The Amazon Kindle is synonymous with eReaders to the point most people refer to all eReaders by that name.

Although Kobo is a fine alternative to the Kindle, the entry-level Kindle remains a go-to product for anyone looking to get into digital reading, and the 2022 model improves the formula in a few ways.

The addition of USB-C for charging is welcome and long overdue – finally no Kindle Amazon sells has the old micro-USB port.

There’s also a higher resolution display than the model it replaces, putting the definition on par with the more expensive Kindle Paperwhite.

If it’s a Kindle you’re after, there aren’t many reasons to buy one of the more expensive models over this one.

Amazon has slimmed down the dimensions and bezels of the 2022 Kindle ever so slightly from the discontinued 2019 model, though the basic design is much the same – plastic construction all over with a larger chin to hold onto.

The Kindle doesn’t feel premium given its matte plastic, which I found picked up scuffs rather easily, but it is also very solid with hardly any bend or flex to the body. I tested the black model, and there’s a blue one if you prefer.

I have small hands but can easily grip either side of the Kindle with one hand or balance it on a pinkie to tap the screen with a thumb to turn pages. It’s also slim and narrow enough to slip into the back pocket of a pair of jeans – just don’t sit on it.

The screen is recessed into the body slightly unlike on the pricier Kindle Paperwhite where it is flush. The USB-C port is on the bottom edge right next to a light that shows battery status (green for good, yellow for charge me) and a power on/off button.

It’s great to see USB-C here, finally, for the first time on the cheapest Kindle, but it’s still not waterproof. It means if you want peace of mind in the bath you’re going to have to go for a more expensive eReader.

The Amazon logo is unsubtly pressed large into the back of the Kindle, but at least the word ‘Amazon’ is nowhere to be seen. ‘Kindle’ is printed on the front chin.

A welcome upgrade is the 300 pixels per inch screen resolution, now the same as every other Kindle, up from 167ppi on the old model. It makes a world of difference, and brings the cheapest Kindle up to the same sharpness as models that cost more than double.

While other Kindle have 17 or 25 LEDs lighting the screen for reading in low light, this regular Kindle only has four. Thankfully they are more than enough for reading even in pitch black, but it’s a shame it doesn’t have auto-brightness.

The 6in e-ink display is a touchscreen, so you tap or swipe to turn pages in books. It’s a simple, no-frills look, and all the better for it.

Once you have a book fired up, the Kindle itself melts away and lets you read with no issue, which is the whole point of an eReader. No notifications, no distractions.

Page turns are instant upon tapping the screen, and the device is faster at this than the Kobo Clara 2E, which costs more.

The default Kindle font is as legible as it ever was, but you have a choice of nine in all including one to aid dyslexia. You can also adjust boldness and size of font, and change the orientation, margin, alignment, and spacing to really hone how you want the pages of your book to look.

I also like you can quickly switch on Dark Mode to invert the colours and read white text on black background, which is best when reading in total darkness.

I really have very few complaints about reading on this cheapest Kindle and found I could comfortably do so for hours. I did find the absence of auto-brightness annoying – the backlight does not adjust depending on the ambient light like it can on the Paperwhite or several Kobos. The brightness setting is a tap and swipe away in a book, which distracts when reading.

It’s a very light device at 158g, perfectly slight enough to hold with one hand for a long period of time.

Though tapping through pages is fast, the low-powered processor lags a little when typing in words to search in the Kindle Store or tapping in and out of books and store listings when connected to Wi-Fi (either 2.4Ghz or 5.0GHz networks are supported).

Unlike some Kindles, this one is only available with Wi-Fi and does not have an unlimited 3G connection with the asking price. Only the Kindle Oasis still offers this, and it looks like Amazon is phasing it out.

You can set up the Kindle after you first turn it on on the device itself, but it’s easier and more convenient to do it using the Amazon app on your phone. I did this, and as long as you’re logged into your Amazon account on the app it works well and quickly.

The Kindle’s software gets away with being quite clunky because you don’t really have to use it that much. Once you’ve got a book on the go you don’t have to use the interface until you want to find a new one to read.

Part of the clunkiness can’t be helped as e-ink by its nature is a slower screen technology than the LCD and OLED displays we’ve become used to on smartphones. Trying to scroll through books or listing pages in the Kindle Store can be a chore as the greyscale text and images ghost and load. This is the case for most eReaders – not a particular fault of this cheaper Kindle.

Amazon splits the software into ‘Home’ and ‘Library’ tabs, which is to simplify it far too much. The Kindle Store is hidden behind a tiny shopping cart icon that some people might miss, while settings are spread across submenus behind a three-dot button.

Better is the support for Audible (an Amazon company) audiobooks, which you can purchase directly on the Kindle just like books. Without a headphone jack though you will need to connect Bluetooth headphones.

Via this audio connection, those with any visual impairments can use the VoiceView screen reader, which can speak to guide you through menus and read aloud books using text-to-speech, though this is only available in English.

The X-Ray feature is also handy. If you can’t remember the characters or situation in a book, you can open the X-Ray option from the settings, and it’ll give you a summary so you don’t have to trawl back to an earlier chapter.

However, when I downloaded a free EPUB from Project Gutenberg (a legal online source of books whose copyright has expired) and dropped it into the documents folder using a Mac, the book displayed on the Kindle but would not open.

This hidden page on Amazon’s site says Kindles will support EPUB files at some point in late 2022, but only via the Send To Kindle app.

I then downloaded a MOBI file, which also didn’t open properly. It didn’t work on a PC, either.

This Amazon page says “MOBI is an older file format and won’t support the newest Kindle features for documents”, so Amazon has changed its tune. Older Kindles supported the free file format, and its current guidelines are misleading.

I went back and downloaded the same book in the folder ‘older Kindle’, also a MOBI file, and then it worked. Amazon makes the process convoluted to put you off this perfectly legal way to read eBooks.

If you want to load free eBooks easily onto a device, don’t buy a Kindle, get a Kobo – an eReader that also lets you borrow books from your library via the OverDrive service, unlike Kindle.

Thankfully, Amazon’s Kindle Store is superbly extensive and will likely have every single book you search for, and there’s a superb feature called WhisperSync that other eReaders lack: if you own the eBook and audiobook (from Audible, an Amazon company, naturally) of the same title, you can pick up where you left off as the versions sync with each other.

Amazon promises six weeks of battery life when the Kindle is fully charged and used for half an hour a day with Wi-Fi off and the backlight set at 13, which is one step above half.

Using Wi-Fi, having the brightness high, and playing Audible books will run the battery down more. I only charged the Kindle once during three weeks of testing, but only to alleviate my general battery anxiety when any device dips below 50%. It had not reached zero!

It ships with a USB-C cable in the slim cardboard packaging, but no charging brick. Amazon says it takes four hours to charge from a computer.

You can, obviously, buy either version from Amazon US, Amazon UK, or from Amazon online in Europe such as Amazon France.

Considering the price, I would recommend stretching to the Kindle Paperwhite 2021 if you can as for $139.99/£129.99/€139.99 you get an eReader with a better backlight, flush screen, and full waterproofing.

It’s worth noting that’s only 8GB of storage though compared to the 2022 Kindle’s 16GB, and for that price you also get those pesky ads – so the new Kindle remains the best value Kindle, even if it’s more expensive than the last generation model.

The 2022 Kindle is the cheapest Kindle you can buy, but as the entry-level model it costs more than the last few models

The 2016 Kindle cost £59.99 in the UK, so a bump up in six years to £84.99 is quite steep – though you now get a better screen, USB-C, and a backlight. It’s the Kindle to get if you want to spend as little as possible but don’t care about it being waterproof.

It’s frustrating Amazon makes it so difficult to sideload legal free eBooks but the Amazon Store is still the most extensive on the planet. If you don’t want to buy from Amazon then you can get a Kobo, but even at this price, the 2022 Kindle is a formidable eReader.