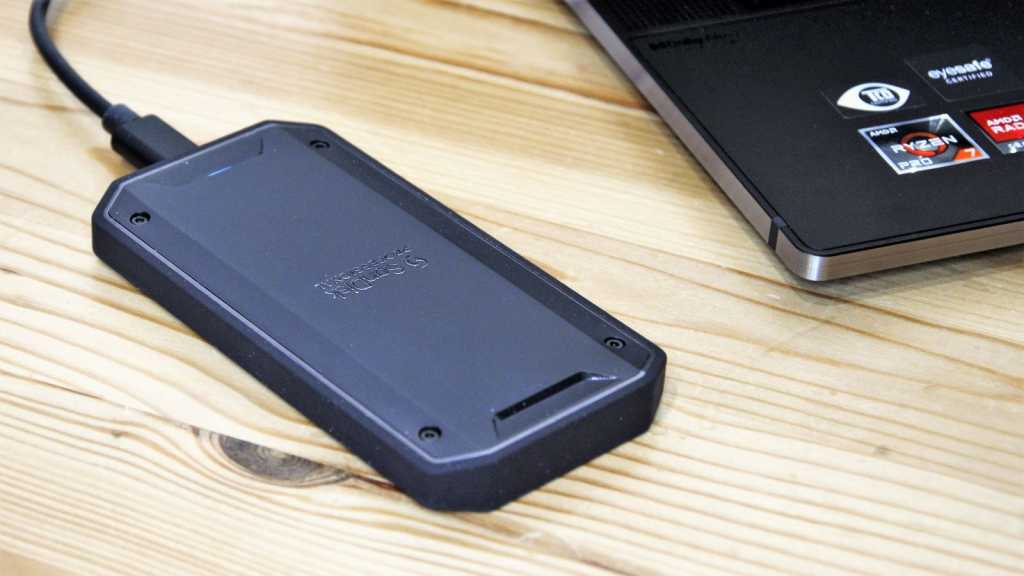 Mark Pickavance
At a glance

An excellent durable external drive that delivers blistering speeds over Thunderbolt and decent performance over USB. Irrespective of that, given the price, unless you have money to burn, it’s hard to recommend when there are cheaper drives with greater capacities that can match this performance.

Western Digital has divided up the branding of its products into sub-brands, and SanDisk Professional is the one specifically aimed at supporting customers with specialist needs.

In this grouping are external RAID enclosures, desktop G-Drive products and various flash drive readers, along with the products of interest here, external SSDs.

Existing SanDisk customers will be familiar with its Extreme Pro portable drives and how they offer excellent value for money for ordinary users. But the SanDisk Professional PRO-G40 is an entirely different beast at an alternative price point.

For those that have handled a SanDisk Extreme drive, the PRO-G40 is something of a culture shock, as the quality of construction isn’t comparable. The PRO-G40 is so much nicer.

The top face of the drive is a finely detailed metal plate, and the back and sides are a firm rubberised compound that forms a protective shield around the drive.

Four small hexagon Torx screws hold the enclosure together, although I resisted the temptation to remove them to peer inside. The PRO-G40 IP68 is rated for duat and waterproofing, so opening it would probably undermine those features.

It also has a 4000lb (approx 1800kg) crush resistance, and up to 3m drop resistance, though I haven’t tested those.

Given the high cost of this item, it’s slightly disappointing that it only comes with a 20cm long Thunderbolt USB-C cable and no USB Type-A adapter. A carry pouch wouldn’t have gone amiss and could have stored and protected the cable.

Therefore, what the PRO-G40 represents is a high-quality device designed for those that exclusively use Thunderbolt 3 or USB 3.2 Gen 2 with USB-C ports. Alongside that flexibility, SanDisk designed it to survive being thrown in a photography bag along with all manner of other equipment on a daily basis without worry.

The SanDisk Professional PRO-G40 come only in 1TB or 2TB of capacity, and not the smaller 500GB or larger 4TB options that the Extreme series drives offer. When you consider that the scale of the PRO-G40 allows for it to hold a full 2280 M.2 drive, that’s a bit underwhelming so perhaps other capacities will arrive later.

Very often, drive makers won’t discuss what the internal devices are on external SSDs, since they might choose to alter them to streamline production or make cost savings down the line.

But the PRO-G40 is an open book in this respect because the underlying SSD inside can’t help but announce itself on the hardware IDs as an SN750E. It seems reasonable to interpret this as a Western Digital Black SN750 SE or a variant of that NVMe drive.

It’s worth noting that neither the original SN750 nor SN750 SE supported hardware encryption, and it isn’t mentioned in the SanDisk Profession PRO-G40 flyer, so I assume it’s not here either.

When I first used the review model, I discovered that SanDisk assumes that most customers will be using this on an Apple Mac, as it is pre-formatted for Mac OS. For Windows PC users, like your reviewer, this means that the drive needs to be reinitialised using the Management console before it can be used, or it won’t appear as a drive.

When connected, a small white LED can be seen at the cable end of the drive, and this flashes to show the drive is being accessed.

The connection port is compatible with both Thunderbolt 3 or 4 and USB 3.2, with Thunderbolt offering the very best performance. That’s helpful since even some Apple equipment doesn’t include Thunderbolt, and most Windows desktop users won’t have that port either.

For those looking at this drives page on the WesternDigital website, it appears that it doesn’t offer any special software or utilities for the PRO-G40, not even a utility to maintain the firmware. I even installed the latest release of the SanDisk Dashboard and it fails to recognise the drive.

There’s an argument that customers won’t buy the PRO-G40 for its software support or encryption but rather the raw speed of this device. That’s an assertion I’m happy to test.

We’ve reviewed several external SSDs that support either Thunderbolt or USB 3.2 Gen 2×2, and the increase in bandwidth that these interfaces offer has a dramatic impact on the speeds of reading and writing.

What’s important to understand is that ordinary USB 3.2 Gen 2 only supports a total transfer speed of 10Gbit/s, and Gen 1 only half as much.

The PRO-G40 doesn’t support USB 3.2 Gen 2×2, so the fastest that it can go when attached to a USB 3.2 Gen 2 port is around 1,000MB/s for both reading and writing. As the underlying SSD technology is the SN750 SE or similar SSD, that device is using an M.2 NVMe PCIe 3.0 interface, and in a desktop M.2 slot would be capable of going much faster.

The connected bandwidth of Thunderbolt 3 is up to 20Gbit/s on the data channel and using that interface on my test system resulted in 2,788MB/s reads and 2,577MB/s writes, using the 2TB model and the highly optimistic default mode of CrystalDiskMark 8.04.

These numbers were supported by ATTO tests, and it was down to AS SSD to deliver more sobering results with 2,092MB/s reads, and 1,830MB/s writes.

Whichever of these numbers you wish to believe, this is still one of the fastest external drives we’ve ever tested and almost identical to the fantastic OWC Envoy Pro FX portable SSD.

If you have Thunderbolt, then this is a better investment, as it reduces the time to transfer files by half, but for those with only USB 3.2 Gen 2 ports, it certainly isn’t worth it.

On USB, the best speeds I attained were around 1,000MB/s for both reading and writing.

That cup of coffee, please put it down before reading on.

For those in the UK that might be wondering if they’ve been singled out for unfair treatment, French prices are €471.99 and €741.99, making it slightly less expensive in the EU, but not by much.

You can buy it from Western Digital, Amazon and Amazon UK.

You may also be interested in how that compares with the SN750 SE, which effectively seems to be inside the PRO-G40.

Another head-scratching detail is that the OWC Envoy Pro FX portable SSD has identical American pricing for 1- and 2TB models, but OWC also offers 240GB, 480GB and 4TB capacities. In the UK, the 1TB version of the Envoy Pro FX can be bought for around £320 and the 2TB for £535, making it noticeably cheaper.

Those in the market for a Thunderbolt external drive should also look at the Plugable range of devices for more affordable options. With the price of NAND memory falling like a brick currently, how Western Digital justifies this pricing, especially outside the USA, is unfathomable.

In a single product, we rarely see get the good, bad and downright ugly simultaneously.

At the positive end of this equation, SanDisk has created a gorgeously crafted external drive that can take knocks and even exposure to dirt and water without batting an eyelid.

The initial good impression is further enhanced by the excellent performance on offer over Thunderbolt and acceptable speeds over USB 3.2 Gen 2.

There is no pouch or USB Type-A adapter, it comes unhelpfully formatted for a Mac, and there are no software utilities for it, but I could forgive those errata if it was priced right.

Unfortunately, the pricing of the PRO-G40 is utterly bonkers, and as the value of NAND continues to fall, it will look increasingly ridiculous. For those thinking that the USA gets a better deal, they do, but not to the point where even those prices are justifiable given the underlying technology and its cost.

Expect these not to sell in volume and then undergo a massive price drop when SanDisk realises that taking a cheap NVMe drive and putting it in a nice case doesn’t triple its value proposition. When that happens, it’ll make for a great purchase.