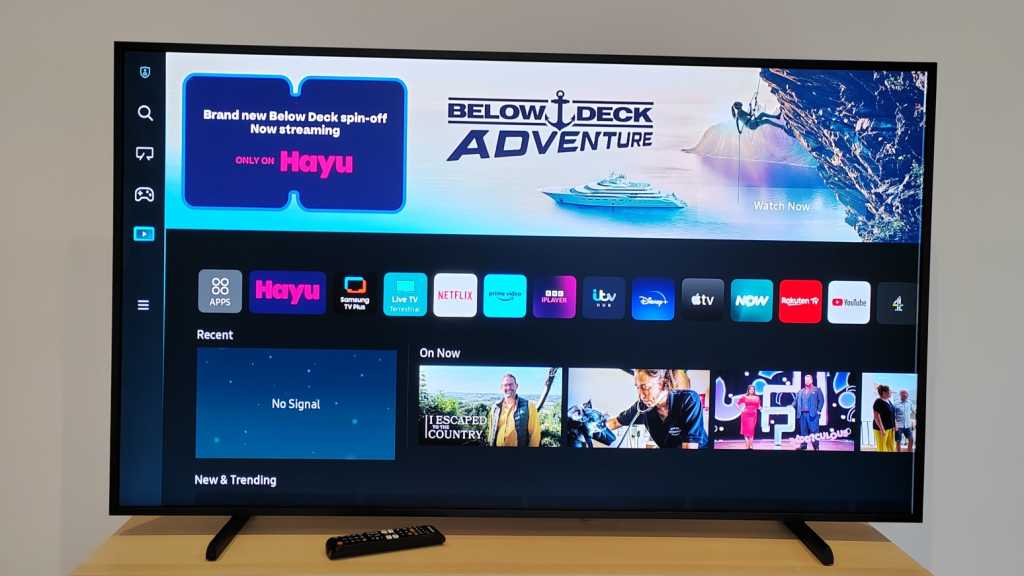 The Frame 2022 is a uniquely customisable 4K QLED which can be dressed with a variety of art-style frames for wall hanging. It’s also a well-equipped smart TV, that’s ideal for bright room viewing.

The Frame is the flagship of Samsung’s lifestyle TV range (which also includes the Serif and Sero models), its cute conceit being that it can double as a work of art when you’re not catching up on the latest true crime docu on Netflix.

Intended to be customised, the panel can be augmented with an art frame of various colours and styles, all the better to display the Old Masters when wall mounted. These colourful bezels are sold separately, so you’ll need to budget accordingly.

In this 2022 iteration, The Frame is built around a QLED panel with an unusual matt finish and comes with all the smart functionality of its more conventional stablemates.

Straight from the box, and unadorned, The Frame looks much like any other flatscreen. There are two slot-in feet, which are height adjustable, and sit toward the edge of the screen, while a black bezel, slightly deeper than most, borders the panel.

The idea is that most will customise this with an optional magnetic bezel, which clips on top. There’s a variety of colours to choose from, including white, beige, teak, brown, and brick red, and multiple styles, from modernistic to Art Deco.

The back panel of the set is flat, with a uniform depth to ensure it hangs close to the wall. A Slim-Fit wall mount is included in the box.

All connectivity is handled by a separate One Connect box, which is around the size of a traditional set-top box. It’s into this that you’ll route your aerial connection and external sources, as well as power. A single clear cable connects this function junction to the panel itself.

There are four HDMI inputs, one of which is eARC enabled, and another 4K 120Hz capable. There’s also a digital optical audio output, Ethernet and common interface slot. There’s a choice of two tuners, one terrestrial and the other satellite. With no Freeview Play onboard, UK viewers just get regular Freeview.

The Frame ships with two remote controls, A standard black zapper, and a white version of the brand’s solar-powered Bluetooth controller.

The operational heart of The Frame 2022 is Samsung’s Tizen operating system. This smart portal has been around for some time now and is home to a wide array of streaming services, including Disney+, Prime Video, Netflix, AppleTV+ and so on.

There’s also a SmartThings dashboard, for any compatible smart home devices you might have.  Meanwhile, a sidebar offers quick access to Search, Art, Game and Media sub-menus.

When you go into Art mode, there’s a selection of complimentary digital artworks available, with the option of subscribing to the Samsung Art Store for $5.99/£3.99 monthly to unlock 1,000 more. Alternatively, you can use your own JPEGs, loaded via USB or sent from your smartphone.

The TV works with Bixby, Amazon Alexa and Google Assistant voice assistants, and is AirPlay 2 enabled.

One of the new additions to Tizen is a Game Hub, with access to streaming game services; it’s joined by a pop-up interface which collates relevant gaming info, such as Game image mode and input lag.

I measured input lag at 10.5ms (1080p/60fps) with Game mode selected, and 13.8ms with Game Motion Plus selected, the latter allowing a smidge of image processing to sharpen things up.

The Frame 2022 utilises a 4K QLED panel (although note the 32in model is Full HD like The Frame 2021), so you would expect a high level of colour vibrancy, and that’s exactly what you get. Reds do look suitably rosy (rather than orange), and blues pop. The set does suffer from a limited black-level response, though, which means near shadow details fog together and black sequences tend toward grey.

There’s also obvious backlight blooming and splashing from this edge-lit panel. Watching a letterbox movie with bright elements in the foreground will cause black bars to sporadically lighten.

That said, the most obvious difference between The Frame and other QLED models in the Samsung lineup is the matt screen finish, which helps artworks look more authentic.

Concerns that this matter treatment would take the sheen off regular TV watching prove unfounded. Indeed, the anti-reflective treatment is darn good at minimising unwanted reflections, be they from lounge lights, sunlight or otherwise.

The Frame 2022 makes a fine bright room set. The QLED display is inherently bright, and cuts colour and contrast through even when the house lights are up.

The QE55LS03’s HDR performance is reassuringly punchy, too. Like the rest of the Samsung QLED fleet, there’s no support for Dolby Vision, but it is HDR10+ and HLG compliant.

I measured peak brightness at 700 nits using a 10% patch window which is more than good enough to add depth and twinkle to specular highlights.

Picture modes comprise Dynamic, Standard, Movie and Filmmaker. On this particular screen, I mostly found myself gravitating to Standard, although I appreciate the extra pop Dynamic adds to artwork – it sure looks great with van Gogh’s The Starry Night.

Alternatively, you can just opt to leave the screen on its AI optimised Intelligent picture setting. This autopilot, which is powered by Samsung’s latest Quantum processor 4K, can be considered fuss free optimisation for menu-phobes.

Audio is particularly important for The Frame, as the set is less likely than most to be partnered with a soundbar. Reassuringly, it’s rather good, thanks to Samsung’s Object Tracking Sound system and support for Dolby Atmos.

The TV has dedicated up-firing drivers which effectively expand the soundstage, and there’s a good sense of sonic movement about the picture. The Frame is also compatible with Samsung’s Q-Symphony soundbars, where TV and soundbar speakers work in tandem.

You can buy it from Samsung or a wide range of retailers below. Check out our chart of the best TVs to see more options.

The Frame is a unique TV proposition, which in this 2022 iteration is looking better than ever. The adoption of the matte screen is entirely appropriate and really adds to the arty vibe that The Frame engenders. When it comes to interior design, The Frame has obvious appeal.

Overall picture performance warrants a thumbs up, with the caveat that black level depth is limited and the screen is prone to backlight blooming.  The screen’s audio chops are surprisingly decent.

The provision of the One Connect box simplifies wall hanging, reducing cable spaghetti down to a single strand, but you will need to accommodate the unit somewhere nearby, and it’s quite a large piece of kit.

A specialist proposition, then, but one that comes highly recommended.