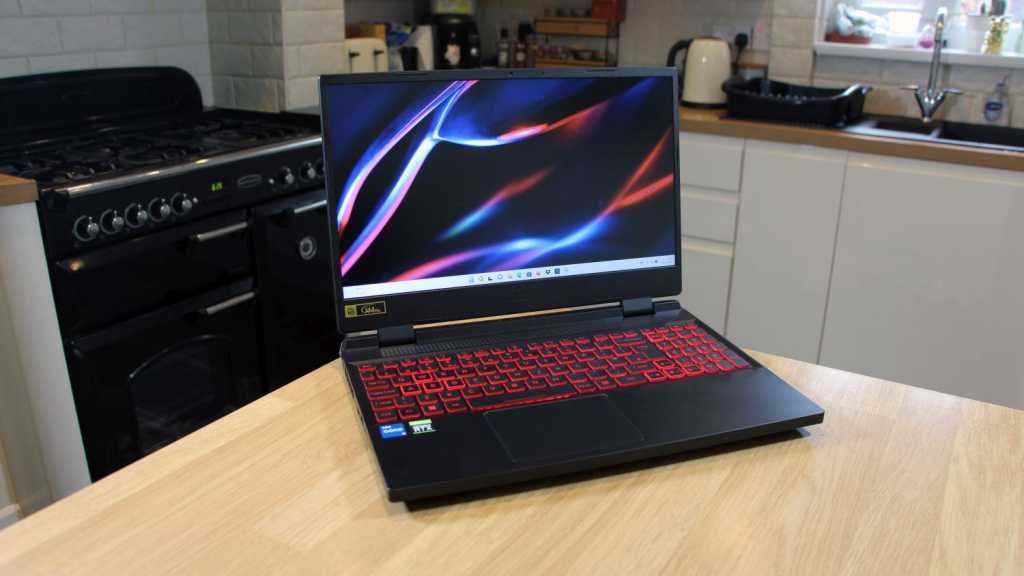 The Acer Nitro 5 remains a solid option for affordable gaming thanks to its decent speeds, updated chassis and satisfying keyboard, but if you’re willing to shop around then you’ll find other notebooks with faster processors, better battery life and bolder screens – all areas where the Nitro suffers.

The Acer Nitro 5 is a perennial budget gaming laptop favourite, and the 2022 version includes one of Nvidia’s latest graphics cores and an Intel 12th-gen CPU. So on paper, it could easily maintain its status as one of the most popular affordable gaming options on the market.

The model I’ve reviewed uses an Nvidia GeForce RTX 3050 Ti GPU and Intel Core i5-12500H processor, and that modest hardware means a tempting price: this particular Nitro only costs $899 in the US and £984 in the UK.

This certainly isn’t the only gaming laptop with a low price, though, so in-depth testing is needed to find out if the latest Acer Nitro 5 can retain its spot on our best cheap gaming laptop chart.

Last year’s Acer Nitro 5 looked dated, so I’m pleased to report that this year’s model has a more mature design. The angled sections and red accents have gone in favour of cleaner lines, slimmer screen bezels and no odd angles.

Building a sleeker, cleaner laptop is certainly not unique in the gaming market, but it does mean that the Nitro does a better job when up alongside competitors like the Asus TUF Gaming A15 and Dell G15.

There’s a little give in the Acer’s panels, which is to be expected at this price but this laptop is easily robust enough to be slung in a bag without concern.

The right-hand side of the rig houses two USB 3.2 Gen 2 ports, and on the left edge there’s a USB 3.2 Gen 1 port, the audio jack and the Gigabit Ethernet output. At the rear there’s a USB 3.2 Gen 2 Type-C port that handles DisplayPort, Thunderbolt 4 and 5V/3A device charging, and it can also be used to charge the laptop. There’s also a future-proofed HDMI 2.1 socket.

Internally, The Nitro serves up dual-band 802.11ax wireless and Bluetooth 5.2, and the feature set completes with a webcam but, sadly, there’s no facial recognition foe Windows Hello, no fingerprint reader and no card reader.

Still, that’s enough to handle most situations, and neither rival offers significant improvements. The Asus has an extra USB-C port but has one fewer full-size USB port and only uses HDMI 2.0b. The Dell, meanwhile, mirrors the Acer in terms of connectivity.

The Nitro does fall behind when measured: its 2.5kg weight and 27mm body match the Dell, but the Asus is lighter and slimmer.

It’d be unrealistic to expect mechanical hardware on an affordable laptop, but Acer does a decent job with this chiclet unit. The keys are tall and push down into a firm base, and their typing action is fast, consistent and crisp so you get a responsive and robust experience in games. It equals the Asus and easily beats the Dell’s shallow buttons.

The Nitro 5 for 2022 includes a number pad, a double-height Return button and full-size cursor keys, so its layout is a little more accommodating than those elsewhere. Negatively, though, the power button sits on the keyboard and is too easy to press, and there’s no RGB LED lighting – only a red backlight.

However, images at some retailers appear to have four controllable lighting zones across the keyboard.

The trackpad is underwhelming, with moderate size and soft buttons, so I’d recommend that anyone who wants to enjoy gaming attach a USB mouse instead.

The Nitro 5’s 15.6in screen uses IPS technology, and it pairs a 1080p resolution with a 144Hz refresh rate. You don’t get Nvidia G-Sync or a low response time, but that specification is fine for mainstream single-player and eSports gaming.

The contrast ratio of 1,494:1 is superb, and bolstered by a black point that sits down at 0.19 nits. Those are great figures and mean that games look bold, with loads of depth. The colour temperature of 6586K is excellent, too, and ensures that the screen doesn’t look oversaturated or cold.

In other areas, though, the display disappoints. The delta E of 5.49 means that colours aren’t hugely accurate, and the Nitro’s panel only produced 57.6% of the sRGB colour gamut – so it won’t render many of the shades needed by games or movies. The result is a bit underwhelming and means that content looks a bit flat.

The peak brightness level of 284 nits isn’t very good, either: acceptable for indoor use but nowhere close to the levels required for outdoor gaming if that’s what you plan to do.

Don’t expect much from the speakers. The pair of downward-firing 2W speakers lack bass, volume and clarity, so they’re only suitable for basic media duties. A headset is a wise investment.

The display’s contrast means that you can still play mainstream games on this screen, but the Asus and Dell panels make games look better thanks to improved accuracy and sRGB coverage. And if you want a higher resolution or refresh rate, you’ll have to spend more money.

The GeForce RTX 3050 Ti is one of Nvidia’s entry-level laptop GPUs, which means a modest specification: it’s got 2,560 CUDA cores and just 4GB of memory. Helpfully, though, its peak power output of 95W is right at the top end of the core’s capabilities.

Intel’s Core i5-12500H is a similarly mid-range part, but it’s still got four Hyper-Threaded performance cores with a peak speed of 4.5GHz. Thankfully, there’s 16GB of memory in a dual-channel arrangement, and the 512GB SSD rattles along with decent read and write speeds of 6,454MB/s and 3,900MB/s.

In Far Cry New Dawn at Ultra settings the Acer averaged 77fps, and in Cyberpunk 2077 at the same graphics level the Nitro averaged 67fps – both scores that mean smooth gameplay. There’s ample grunt for esports on the 144Hz screen, too, thanks to a Rainbow Six Siege average of 189fps. And I didn’t have any thermal issues: no matter the task, the Acer remained reasonably cool and quiet.

There are still limitations, though. I tried to play Cyberpunk with ray tracing and DLSS activated and only got an average of 27fps – don’t expect to get much next-gen ability. You won’t get very far if you want to output to screens with higher resolutions or refresh rates, either.

And, unsurprisingly, you get a decent jump in performance if you’re willing to pay for an RTX 3060 laptop, too. That GPU featured in the Asus, and it was ten frames faster in New Dawn and had a sizeable lead in 3D Mark Night Raid.

The Acer can’t keep up with rivals in the processing department, either. Intel’s Core i5-12500H is a fine everyday chip, but its Geekbench multi-core result of 8,746 is about 1,000 points behind the AMD Ryzen 7 6800H processors you’ll find in similarly priced Asus and Dell notebooks.

The Core i5 part certainly isn’t a slouch, but it does mean the Acer has limitations. It’s fine for mainstream gaming, running loads of browser tabs, tackling office work and doing light photo-editing, but AMD’s chips are better for tougher content creation and multitasking.

Don’t expect great battery life, either. During a gaming test the Acer lasted for an hour, and its lifespan extended to three hours while working and just over four while playing videos. That’s not surprising in a budget gaming laptop, but the Asus and Dell notebooks both delivered longer working lifespans, so they’ve got more versatility away from games.

The Acer Nitro 5 reviewed costs $899 in the US and £984 in the UK. In the US it’s available in various configurations from Acer, Amazon, Best Buy and Newegg, and in the UK it’s sold at Acer, Laptops Direct, Amazon, Ebuyer and Currys. It’s reasonable pricing, but in some instances the Nitro faces a significant challenge when it comes to value.

And if you’d prefer the even faster RTX 3070 Ti, you’ll have to pay £1,574 or £1,499. That’s a decent price – Asus and Dell laptops with equivalent hardware are usually more expensive.

One final word of warning: many retailers still sell older models of the Nitro 5 with weaker, obsolete components, so take care before you buy. This 2022 edition has the model number AN515-58.

Check out our chart of the best cheap gaming laptops to see all the top options.

The Acer Nitro 5 serves up solid mainstream gaming power, a satisfying keyboard and a decent selection of ports and features inside an updated enclosure – and, in this specification, it’s no more expensive than its rivals.

Sadly, though, the underwhelming display, poor battery life and the appearance of AMD processors elsewhere work against the Nitro. The Acer remains a solid budget gaming choice and retains its place on our budget gaming chart, but it doesn’t do enough to overhaul the top options.