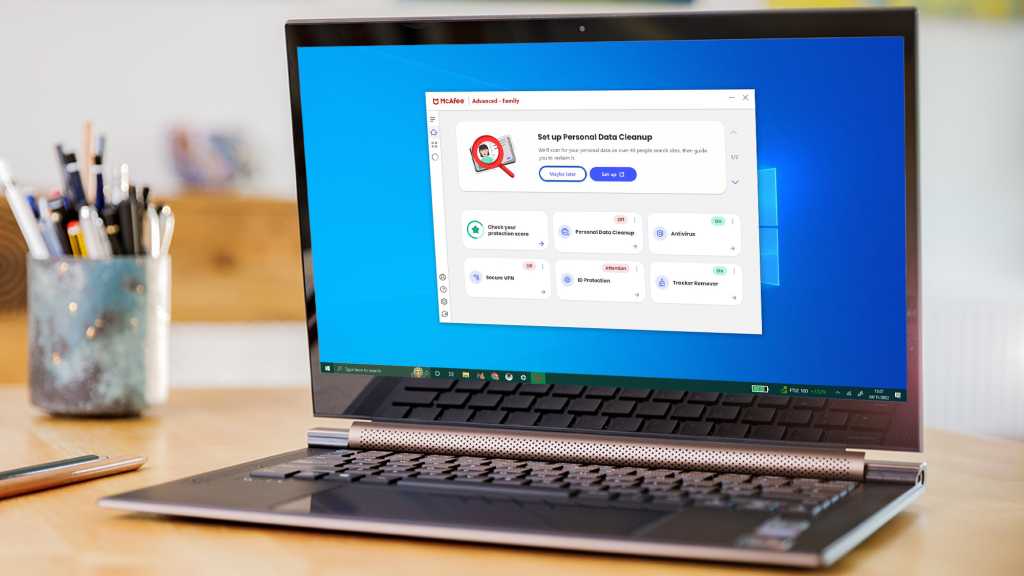 Reinventing online protection for the modern world costs a little more, but McAfee+ is great value because it offers peace of mind.

In an age where most devices have some sort of built-in antivirus protection, it would be very easy for stalwarts like McAfee to roll over and slowly lose relevance. Of course, McAfee doesn’t see it that way and McAfee+ is the response – a complete cybersecurity package that goes beyond simply blocking nasties to offer holistic protection for everything you do online.

McAfee+ is the response – a complete cybersecurity package that goes beyond simply blocking nasties to offer a complete holistic ring of steel for everything you do online.

Anyone familiar with McAfee Total Protection will find themselves at home, primarily because this is Total Protection, but more Total. The “plus” certainly isn’t just a marketing gimmick, either.

McAfee+ sits above them, and is available in three tiers (Advanced, Premium and Ultimate) but we’re going to focus on the top-of-the-range McAfee+ Ultimate, so we can put as many features as we can through their paces.

However, there are some differences in the offerings in different countries, for legal and practical reasons. We’ll deal with those as we go, but if you don’t live in the US, there is no Ultimate edition, leaving the Advanced version as the top of the pile, which has an almost identical feature set.

Probably the most important feature in McAfee+ which you don’t get in any version of Total Protection is the sort of identity protection that you’d normally see from an insurance company.

Opt for the Ultimate version (in the US only, remember) and you are get $1M Identity Theft and Stolen Funds Coverage, plus up to $25,000 to cover any ransomware demands. For the rest of the world, there’s still an impressive portfolio of ID protection including some that might surprise you.

One such inclusion is ‘Lost Wallet’ protection, which does exactly what it says. If you lose your wallet, McAfee+ will help you cancel your cards and order replacements from a single screen.

Personal Data Monitoring is another great feature. McAfee’s systems keep a watch for any of your usernames and passwords that have been stolen in data breaches and alert you to change your passwords. In the Advanced and Ultimate editions, there’s a simple step-by-step process to help you do this within the app. In the lower Premium tier, you simply get the warnings and are left to act on them one by one.

Also included is a fully-featured password manager which lets you securely store all your usernames and passwords. The beauty of this is that you only have to remember your McAfee account password – meaning you can make all your other passwords as complex and difficult to crack as you like, because you don’t have to remember them!

On top of all that, if the worst happens, McAfee even offers 24/7 assistance in repairing your online identity and protecting your credit.

We’ve talked about the “Plus” features a lot, but McAfee is best known for its antivirus and anti-malware protection, which remains at the heart of the offering. McAfee has expanded its reach to include newer devices including Chromebooks and Windows computers powered by chips from ARM.

Online browsing protection keeps you safe from scammers by warning you if you are visiting an untrustworthy site or about to offer up personal information to a suspicious source. The browser extension that protects your browsing works across Chrome, Firefox, and Edge browsers, plus there’s Safari support for MacOS/iOS users.

The main malware protection engine includes antivirus and a firewall (which blocks data being sent through certain ports, or routes, a popular method for hackers). We’ve covered this in detail in our review of McAfee Total Protection.

McAfee has a sterling reputation for this core offering and, as you might expect, it’s the same in McAfee+. McAfee is so confident in its virus-zapping credentials that it now offers a guarantee: if a virus manages to get past the software and infect your device, a McAfee expert will remove it for you. If they can’t, you’ll get your money back. (Worth noting, though, this service is only available if your subscription is set to auto-renew.)

Another plus in McAfee+, ahem, is the expansion of the VPN service to cover unlimited traffic and devices.. A VPN is an increasingly important method of ensuring your privacy. It works by masking your connection with an alternative IP address, meaning it’s harder for you to be traced online.

VPNs are also used to access material available in other countries, and while this is possible, it’s not the primary purpose of McAfee’s VPN and as such you may find alternative solutions better for unblocking Netflix. As a privacy tool however, it’s a real bonus, especially now it’s offered without limits across all your protected devices.

One of our favourite innovations with McAfee+ is the introduction of a personalised security score – a mark out of 1000 that follows you between all your protected devices. McAfee+ offers proactive suggestions on steps you can take to stay safe online, and acting on them improves your score.

We actually found chasing points quite compulsive – and most importantly, it means that you don’t need to worry about how any of the features we’re about to look at work, what they do, or even what they’re called – McAfee+ does all that for you, making it great, not just for tech-heads, but seniors, kids and the less-tech-savvy alike.

The Data Recovery feature is another new feature. Where many other services have, in the past, given you notice that your email address has been involved in a data breach, McAfee+ takes this several steps further.

Not only can you add names, addresses, phone numbers and other personal data to their secure monitoring service, in the event that it finds anything, it won’t just tell you, it will actively walk you through the process of getting the information removed – whether from a legitimate but unwelcome source such as a mailing list, or from the wealth of data being traded on the dark web.

This feels like the beginning of a new era of cybersecurity where the customer is no longer helpless to unwanted intrusion, and McAfee+ makes sure they have the tools to use that new-found power.

If you go for the Family version of any tier, you’ll get a full Parental Control suite which allows you to control who goes online, when, and from which devices, meaning you can let your child play with a tablet, for example, in complete confidence that they won’t see anything nasty. Restricting times can be a useful way of ensuring they put it down and do something else once in a while too!

Finally, there’s a File Shredder which lets you delete sensitive documents on your computer in a way that means that there’s no way to retrieve them – much like a real file shredder in fact, and a much safer option than putting them in the Recycle Bin.

McAfee+ is available in US, Canada, UK, Australia now, with other countries due to launch in the coming months. Features vary between markets – the Ultimate tier, which includes identity theft and ransomware insurance is only available in the US.

Features also vary between operating systems – for example on ChromeOS, you get only malware protection and VPN.

The prices below are the regular annual subscription cost for each edition. There are promotions available in some regions that significantly discount these prices for the first year, so you may not be paying these amounts until your second year of service. All these prices cover you for a full year, for an unlimited number of devices.

For alternatives, see our roundup of the best antivirus software.

There’s little doubt that simply offering anti-malware protection isn’t enough in 2022. With basic protection being bundled into operating systems, the future of safety online is holistic and McAfee has come up with a package that reflects the realities of modern day living.

It isn’t alone, of course – Norton offers a similar suite that includes the same individual protection in the event of a breach or scam. What we love about McAfee+ is that, on top of this, it has designed a ‘gameification’ system to encourage good behaviour without lots of unnecessary jargon, making it far more accessible to the less tech-savvy who want to do the right thing but don’t know where to start.

We’re a bit disappointed that some features, such as the identity protection insurance are limited to US subscribers, but that doesn’t take away from the fact that the global offering is a huge leap forward from an icon in your system tray that nags you without explaining what to do about its findings.

With McAfee now dedicated to the consumer market, having divested its enterprise offerings, it’s clear that a lot of thought has gone into making a product that fits the needs of every user on every operating system – the addition of Chromebook support is very welcome. Norton is already offering additional help for ID protection in the form of a dedicated support agent that you can speak to when you need assistance, but we imagine that McAfee won’t be too far behind.