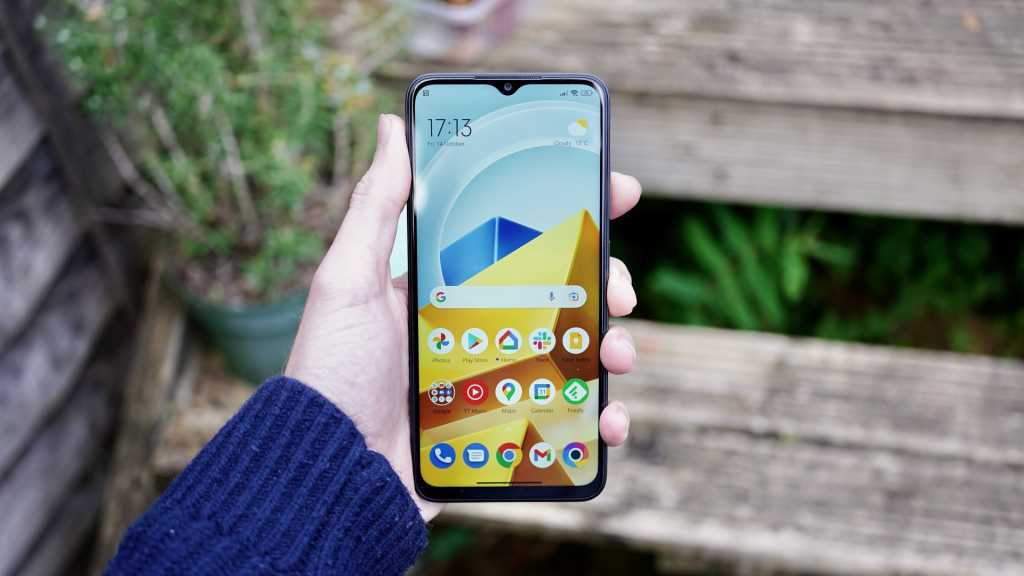 The Poco M5 is a decent phone available for a low price, but it simply lacks the sense of sheer punching-above-its-weight good value that defined many previous Poco handsets. You seem to be getting a little less for your money overall compared to other Poco phones, meaning you’re probably better off finding a deal on a Poco M4 Pro or the Redmi Note 11.

If there’s such a thing as a template for Xiaomi’s Poco sub-brand, it’s a combination of multimedia-friendly performance with a temptingly low price tag. The Poco M5 sticks firmly to that script, offering competent all-round performance for less than £200.

Despite the missing ‘Pro’ in the name, this is essentially a direct follow-up to the Poco M4 Pro from earlier in the year. But has it advanced sufficiently over the previous model – or at all, for that matter?

Xiaomi’s Poco team has really leaned into the dominant camera module look of the Poco M4 Pro and Poco M4 Pro 5G. This component spans the entire width of the Poco M5’s rear cover, somewhat like the Pixel 6a, only much taller.

Another point of interest here is Xiaomi’s choice of finish. While the rear panel (like the phone’s entire frame) is made from plastic, it adopts a fake leather effect.

It’s a love it or hate it flourish, but the Poco brand has never been shy about making bold design decisions. I for one applaud it for trying to do something slightly different, and it’s certainly more resistant to fingerprints than its shiny predecessor.

Less laudable is the sheer size of the phone. It’s rather thick at 8.9mm, while 201g feels too heavy for such a cheap all-plastic phone.

The decision to switch away from the hole punch notch of the Poco M4 range in favour of a teardrop alternative is a rather regrettable one. It makes the Poco M5 look like an older, cheaper phone than its predecessors. Perhaps that’s why it’s no longer deserving of the ‘Pro’ moniker, despite what the shared price tag might suggest.

Once again there are three colours to choose from: Black, Green, and that old Poco favourite Yellow.

Xiaomi appears to have brought the display across from the Poco M4 Pro 5G rather than the Poco M4 Pro. That might sound like a tiny distinction, but it actually represents a sneaky downgrade.

Whereas the Poco M4 Pro was notable for having the first AMOLED display in the M-range, the Poco M5 reverts to a regular 6.58in IPS LCD. It’s not a bad component at all as sub-£200 smartphones go, with a decent 2400×1080 (FHD+) resolution and a 90Hz maximum refresh rate, though you’ll need to activate the latter in the settings menu.

It gets to a claimed 500 nits in HBM (high brightness mode), while with auto brightness turned off I recorded a maximum brightness of around 350 nits. That’s not hugely bright, and the screen can get pretty washed out in outdoor lighting.

Ultimately, it’s that reversion to LCD that stands out here. The Poco M5’s screen simply isn’t anywhere near as vibrant or attractive as its predecessor.

It’s reasonably colour accurate though. Switching from the default Vivid to Standard mode, I recorded an sRGB gamut coverage of 92.4% and a gamut volume of 94.7, with a strong average Delta E of 1.13.

The provision of a MediaTek Helio G99 chip in the Poco M5 is a subtle improvement over the MediaTek Helio G96 of the Poco M4 Pro. Perhaps the biggest difference is that the M5’s chip is built on a smaller, more efficient 6nm process compared to the 12nm M4 Pro component.

It might run cooler and more efficiently, but there isn’t a huge difference in raw performance terms. An average Geekbench 5 multi-core score of 1895 for the Poco M5 is very similar indeed to the Poco M4 Pro before it. Its GPU is slightly more impressive than before, with many of our usual GFXBench tests yielding an extra frame per second.

Gaming performance is solid, if not spectacular. I was able to bump Genshin Impact up to Medium graphical settings and a 60fps target with eminently playable (if not exactly silky) results. That’s not bad given the meagre provision of 4GB of RAM, which represents a downgrade from the Poco M4 Pro’s choice of 6- or 8GB.

Similarly low is the entry-level provision of 64GB of internal storage. With a lot of £200 phones now moving to 128GB as the minimum spec, it feels a little dated. Still, at least you have a microSDXC slot for expansion purposes.

So far we’ve seen signs of regression from the Poco M4 Pro, and that continues with the Poco M5’s camera provision. Most notably, there’s no ultra-wide camera this time around.

You get a 50Mp wide camera, a 2Mp macro camera, and a 2Mp depth sensor. Suffice to say, those last two might as well not exist for all the good that they do.

That 50Mp main sensor also seemingly represents a bit of a step back after the Poco M4 Pro represented the series debut of a 64Mp sensor.

In practical terms, the Poco M5 achieves about as much as you can hope from cheaper phones – to capture decent shots in good lighting. Feed it plenty of light and you’ll get reasonably sharp, natural-looking shots, if a little flat ad suffering from a touch of overexposure in the highlights.

As soon as the light drops, things descend into a noisy mush. Even the dedicated Night mode fails to do much more than brighten that noise up rather than sharpen things.

There’s a 5Mp selfie camera around front, which displays quite a lot of noise and struggles with highlights.

The Poco M5 runs on a 5000mAh battery, which is pretty much table stakes for a modern affordable phone, but reassuringly capacious all the same.

Combined with that more efficient 6nm MediaTek Helio G99 chip and other undemanding components, this is a genuine two day performer. A full 16-hour day of light usage would tend to leave me with more than 70% left in the tank.

Unfortunately, I was unable to run the usual PC Mark Work 3.0 battery test that we use in this scenario. For whatever reason, the Poco M5 repeatedly crashed out of this benchmark, and many others for that matter. Given the strong performance of the phone in general usage, this isn’t a huge concern.

Xiaomi has packed in an 18W charger with the Poco M5, which is a solid inclusion. Again, though, this marks a step back from the Poco M4 Pro, which came with a 33W charger.

It results in some rather slow charging speeds. In 15 minutes of charging from empty, the Poco M5 only reached 6%, while 30 minutes took it up to 21%.

While the Poco M4 series ran on Android 11 at launch, the Poco M5 ships with Android 12. Not that this matters all that much – Xiaomi’s custom MIUI 13 continues to sit heavily on top like a big, gaudy quilt.

It’s an interface rife with niggling annoyances. You still get annoying full-screen (but largely empty of information) notifications every time you install an app. It’s still impossible to see how much screen-on time you’re getting out of a single charge, unlike virtually every other Android UI.

Also like before, however, MIUI continues to be extremely customisable. Don’t like the convoluted split notification system? You’re only a settings menu trip away from combining the two halves into something more standard. Meanwhile, Xiaomi’s Themes offers one of the most extensive wallpaper shop fronts, often with matching icons.

I could still do without all of the wearisome bloatware that blights every Xiaomi and Xiaomi-adjacent phones. Do we really need the Open web browser and Xiaomi’s own Mi Browser on top of Google Chrome? Or the throwaway Tile Fun and Dust Settle games? No. We do not.

Pinning Poco phones down to a specific price or launch schedule can be an exercise in futility. However, the Poco M5 has arrived with a starting price of £179 for 4GB of RAM and 64GB of internal storage.

Alternatively, you can bump the storage up to 128GB for £199. This is slightly cheaper pricing to the Poco M4 Pro from earlier in 2022. It’s also similar to the Redmi Note 11 and the Realme 9i.

You should be able to purchase the Poco M5 through the official Poco website but the buy now button links to AliExpress where the phone costs a ridiculous £629 at the time of writing. So, you’re much better off getting it from the Mi store where prices are correct.

It’s not officially available in the US, but you can buy a global unlocked version for $189 from Amazon if you like.

Check out our best budget phones chart for all the current top handsets.

The Poco M5 offers a fairly competent all-round smartphone experience for a sub-£200 price. However, we’re simply not getting that famous Poco sense of generosity here, and you only need to look at the Poco M4 Pro to see why.

That early–2022 model offers similar performance, a more flexible camera system, a superior display, stereo speakers, faster charging, and more memory, all for a slightly higher price. You can say similar things about the Redmi Note 11, too.

Buying the Poco M5 isn’t a bad idea by any means, and its unique design and excellent battery life are stand-out features. However, it simply doesn’t represent the value that we’re used to seeing from this highly regarded budget brand.