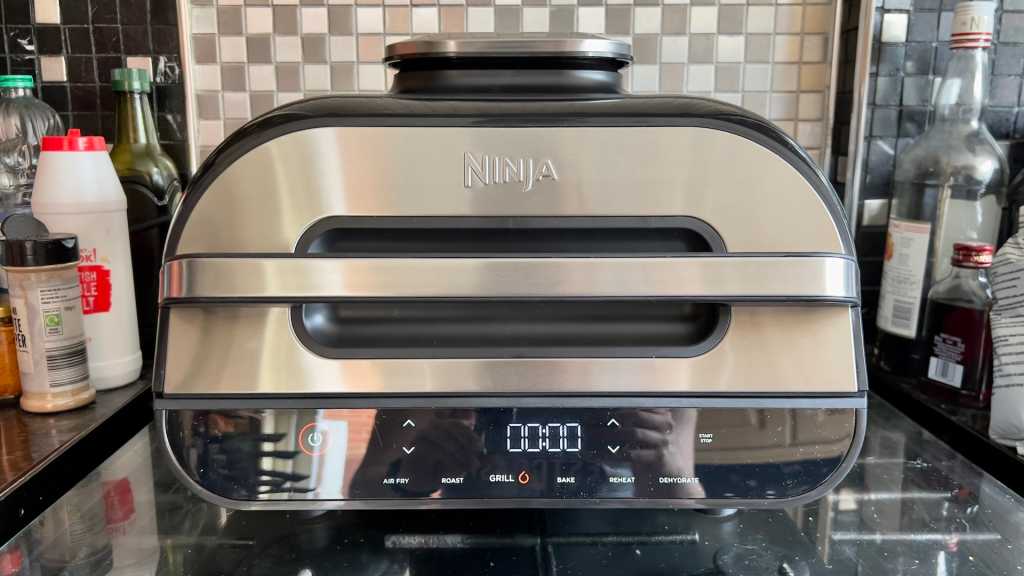 The Ninja Foodi Max Health Grill & Air Fryer is an impressive bit of kit that’ll likely replace your conventional oven, boasting six ways to cook including an intuitive Smart Cooking System to help you get the perfect meat. It’s a bit on the bulky side, and it is expensive, but it’s well worth the cost.

The Ninja Foodi MAX Health Grill & Air Fryer (AG551UK), also known as the Ninja Foodi Smart XL in the US, looks to be the one-stop shop for not only air frying but proper grilling, baking, roasting, dehydrating and even reheating, and believe me when I say that you’ll very rarely use your conventional oven with this around.

It’s smart too, with a Smart Cook System boasting a range of presets for different meats, and the digital probe allows you and the system to monitor temps in real-time, prompting you to remove your meat when it’s just right.

It might be on the bulky side, and it’s certainly a premium product at £250, but it’s also so popular that it’s hard to come by at the time of writing – and after using it for the past month or so, I’m not surprised at all.

To say that the Ninja Foodi Max will take up a bit of space on your countertop would be an understatement. It’s actually much bigger than I was expecting when researching the hybrid online, measuring in at 270 x 390 x 410mm.

That doesn’t take the fact that there needs to be a bit of clearance at the rear to fully open the lid, making it feel like it takes up even more space. It can be pushed back to the wall when not in use, of course, but its presence is always immediately noticeable.

It’s probably a good thing that this is one of the better-looking grill and air fryer combos on the market, with a silver and black body that looks premium even compared to Ninja’s standard Foodi.

What the standard Foodi doesn’t offer, however, is a much larger 229 x 334mm heavy grill plate with plenty of space to cook steak, chicken wings, sausages and the like. In fact, I found I could comfortably cook three 6-8oz steaks or six burgers at once on the grill, rivalling small outdoor grills.

All three inserts are both dishwasher-friendly and anti-stick for a surprisingly easy cleaning process (even with burnt-on bacon fat remnants), and there’s a stiff brush included in the box for those particularly stubborn stains. The only issue is that you can only put two of the three in the Foodi Max for storage, meaning you’ll have to find a place for either the crisper basket or grill plate to live when not in use.

While the standard Foodi uses buttons and knobs for control, the Ninja Foodi Max ditches physical buttons for digital alternatives that disappear when not in use. It’s much cleaner, and unlike some touch-capacitive buttons, the ones on the Foodi Max are very responsive to the touch.

Paired with the digital display, it’s where you’ll control every aspect of your cooking experience. You can set your function, from grilling to air frying and even reheating day-old pizza, and intuitive controls make it a breeze to set up. There’s also a button that’ll let you skip the pre-heating process for quick cooks, though I’d recommend letting the Foodi Max come up to heat before adding your food.

There’s a small compartment on the side that houses a thermometer to keep track of the internal temperature of meat as you cook, and it enables smart cooking functionality too, but more on that in a bit.

Ninja includes a recipe book with cooking charts tailored to the Foodi Max, giving you a selection of dishes to prepare and a great guideline on time and temperature selections for basic food and meat.

To put it simply, the Foodi Max has all but replaced my standard oven and grill for the past month or so, opting to cook everything from steak and burgers to chips and roast potatoes with nary a complaint.

That’s a better temperature range compared to some highly rated air fryers like the 82-205°C Instant Vortex Plus, the current top choice in our air fryer chart.

When it comes to the air fryer function, it works as expected. You tap Air Fry, select your temperature and time and wait for it to preheat. Whack the chips, spring rolls or whatever else you’d like to air-fry in the crisper basket and close the lid. You’ll get an alert when it’s time to shake the basket, and another once the time has run out.

Like most air fryers, the Foodi Max cooks much faster than a conventional oven, meaning I could get crispy bacon in as little as 4 minutes and chips rarely took more than 10 minutes to become golden brown, making it the ideal kit for a quick snack when you’re feeling peckish. I’ve had more bacon rolls in the past few weeks than I’d like to admit!

It’s a similar story when using the bake, dehydrate and reheat options; simply input the temperature and time and get ready to cook your food. The Foodi Max cooks evenly thanks to Ninja’s cyclonic air technology that circulates temperatures inside the chamber for even heat distribution.

It is worth noting that, despite depictions of a full chicken on stickers for the Foodi Max temperature probe, it’s too shallow to properly roast a chicken.

Where the Foodi Max truly stands out is when it comes to the grill, especially if you’re not that confident when cooking meats like steak where timing is everything.

That’s down to a combination of two things; Ninja’s ‘Smart Cook System’, which is essentially a (fairly exhaustive) list of preset meats, and a digital cooking probe that monitors the internal temperature of your food while cooking. The latter really is a game-changer, as when paired with the Smart Cook System that lets you not only select that you’re cooking beef (i.e., steak) but how well you’d like it cooked internally.

You simply insert the thermometer into the thickest part of the biggest bit of meat you have, put it onto the grill plate and close the lid. You might expect there to be a lot of smoke when grilling indoors, but the combination of a built-in splatter guard protecting the heating element and a cool-air zone at the top of the grill means there’s very little smoke when compared to using a skillet.

Not only that, but because the unique design of the grill plate and the cyclonic air technology work so well at providing an even temperature, you don’t need to flip your steak. You can if you want the signature grill marks on both sides, but it’s not a necessary step when using the Foodi Max. You can literally close the lid, work on other food prep and remove it when it hits the right temperature.

Once at temperature, there’s a special ‘rest’ timer that’ll monitor the internal temperature of the steak while cooling, again alerting you to when it’s ready to eat.

Steak is one thing I’ve always struggled to get just right – it’s either slightly undercooked or too well done for my medium-rare liking – but the Foodi Max delivered perfectly medium rare steak every time. It’ll be hard to use anything else going forward if I’m being honest.

It’s not just steak either; the grill can help you cook practically any meat from chicken wings to beef burgers, pork joints to fish fillets, to absolute perfection. If you’re not that confident in the kitchen, the Foodi Max really could open up a whole new world of culinary possibilities beyond simple air frying.

The Ninja Foodi MAX Health Grill & Air Fryer isn’t a cheap bit of kit – but what Ninja tech is?

With impressive performance on offer, it shouldn’t come as too much of a shock to learn that the hybrid will set you back £249.99 in the UK, while the identical Ninja Foodi Smart XL will set you back $259.99 in the US. That may seem expensive, but when you consider how much the Foodi Max can do, it’s pretty decently priced.

The big problem (for us, not Ninja) is that it’s so popular that it’s hard to come by, especially at a time when consumers are turning to air fryers and other small appliances to replace the expensive-to-run oven. With Ninja’s claims of saving as much as 45% on energy costs, it’s very much an in-demand option.

That being said, retailers including Best Buy, Kohls and HSN in the US and Ninja, Amazon and John Lewis in the UK do stock the Ninja Foodi Max – you’ll just have to keep an eye out for when stock replenishes.

The Ninja Foodi Max Health Grill & Air Fryer is no doubt a premium bit of kit at $260/£250, but it still manages to offer great value for money. It combines several functions in one, including air frying, roasting, dehydrating, baking and grilling, with impressively even cooking temperatures and a lack of smoke, but it’s the smart cooking system that’s most impressive.

The ability to not only select the meat but how well done you’d like it is great for those not that confident when it comes to grilling meat, be it steaks or larger beef or pork joints. Even when not using the preset functions, the digital meat probe is very handy, especially for larger cuts of meat.

It’s effortless too, with air strong air circulation meaning you don’t need to flip meats at the mid-way point – though you can if you want the traditional grill marks.

There’s also the benefit of being energy efficient, with Ninja claiming it uses up to 45% less power than a conventional oven.

So yes, while it’s a big appliance that’ll take up a fair amount of room on your countertop, it’s something you’ll find yourself using more than you might expect.