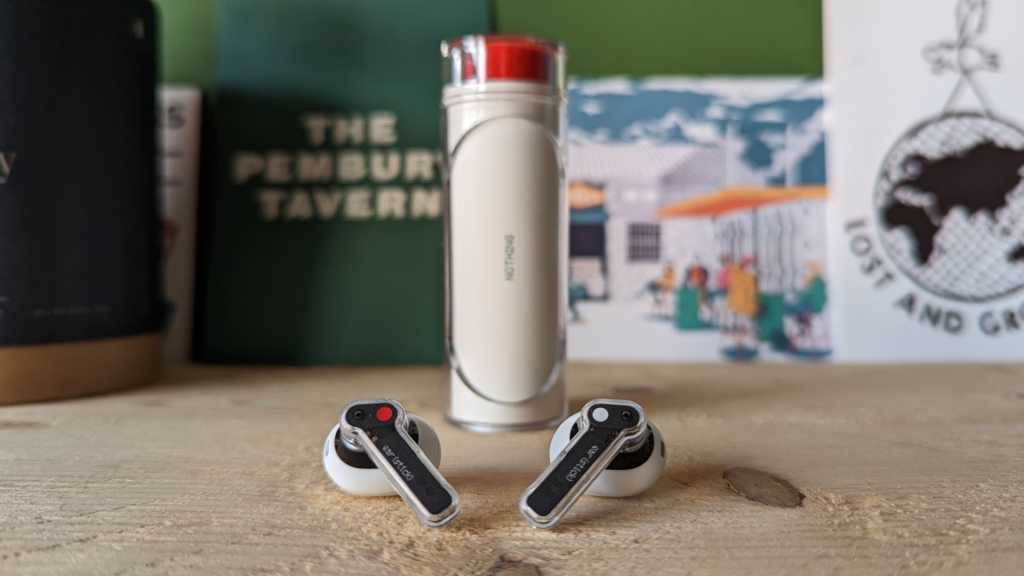 Chris Martin / Foundry
At a glance

The ‘half-in’ design of the Ear (Stick) buds means they are something of a ‘love it or hate it’ prospect. But if you’re looking for affordable open-style earbuds that are comfortable and airy, with good sound quality, then you’ve just found a great pair.

Nothing is back with its third product and it’s returning to audio. At a glance, the Ear (Stick) are very similar to last year’s Ear (1) headphones, but there are more differences than it first appears.

Following a 50% price hike to Nothing’s first pair of true wireless earbuds, the Ear (Stick) are also now the budget model at $99/£99.

Take them out of the case and the Ear (Stick) earbuds look almost exactly like the Ear (1), but if you look closer, there are various subtle changes.

To start with, they lack traditional ear tips, which might seem confusing if you’ve not come across an open design before. It’s not new but remains quite niche in the wireless earbud market and works on a different principle to regular in-ears.

Ear tips help keep earbuds in place but I was surprised by how well the Ear (Stick) fit me. They sit quite snugly in my ears and haven’t fallen out once during testing despite some pretty rigorous head banging to a few tracks. They’re also very comfortable for long listening periods, weighing just 4.4g per earbud.

No silicone tip sticking down your ear canal means no acoustic seal for noise isolation, so the headphones don’t naturally block sound from around you. That’s down to personal preference, but it does provide a pressure-free listening experience.

The Ear (Stick) don’t have touch controls like the Ear (1) and so many rivals. Instead, the ‘press controls’ consist of a little recess on the stem of each earbud. You essentially pinch this to activate the button and you can also press and hold to change the volume.

Overall, they work very nicely once you get used to it – there are audio clicks to help you – and it doesn’t matter if your fingers are wet, unlike the Ear (1)’s finicky touch controls.

The case is very unconventional, but I don’t mean that in a bad way. The cylindrical shape imitates the silhouette of a lipstick case (though less overtly than the Huawei FreeBuds Lipstick did), which you spinning round 180 degrees to open the case and get the buds out.

I’d prefer a tiny bit more space where the end of the stems go but otherwise the case is very satisfying to use. The main downside to this design is dirt getting in which is subsequently very difficult to get out. The last thing to note on design is that the Ear (Stick) have an IP54 dust and water-resistance rating, so they should be good for both rain and sweat.

The question is, do they actually sound better than the Ear (1)? And while that’s a difficult question to answer outright, I’d say for most people the answer is no.

This almost entirely comes down to the open style fit which, on an acoustic level, struggles to compete with traditional ear tips. As mentioned earlier, you don’t get that sealed fit for noise isolation and this has a big impact, particularly on bass performance.

Nothing has fitted the Ear (Stick) buds with something called Bass Lock to help combat this. It plays a tone when you first put the earbuds in to measure your ear canal and the fit of the buds to then automatically adjust the equalizer for any lost bass.

I didn’t actually notice this happen, but you can go and adjust said equalizer if you like. However, even if you use that to push the bass to maximum they can’t compete with traditional buds in a side-by-side comparison.

This doesn’t mean I’m saying the Ear (Stick) sound bad. For the open design, I think the earbuds sound impressive and some people will prefer the spacious nature of the audio. One thing that particularly surprised me is how the sound doesn’t change much if the buds move around, as I’d expected there to be a sweet spot that could easily be lost.

If you have trouble with ear tips, having earbuds that don’t fall out or cause discomfort is definitely a better option, as long as you’re not a bass head listening to EDM (electronic dance music) all the time.

Budget earbuds don’t often have additional features, but you get in-ear detection here, so the music will pause automatically if you take the earbuds out and resume when you put them back. It works really well but you can switch it off if it irks you.

There’s also Clear Voice Technology for calls, using a trio of mics. Nothing says updated algorithms can filter out the noise of things like wind and crowds.

While I’d say the Ear (Stick) are okay for calls, there are better alternatives out there such as the Jabra Elite 3 if you’ll be using earbuds for this purpose a lot.

If you own a Phone (1), then there’s no need to download anything as the settings and controls are baked into the OS.

I don’t have the Phone (1), so I’ve been using the new Nothing X app. Setup is straightforward and those with Android will get Fast Pair and there’s Microsoft Switch Pair too, but note the app is also available for iOS.

Overall, the app is simple and easy to use, letting you access battery levels (although not for the case) and controls.

You have four controls per earbud to play with including the slightly trickier double press and hold which by default has no action, but you might want to set this to trigger a voice assistant.

The app also gives you access to the equalizer as well as settings like in-ear detection and find my earbuds. If you have a Phone (1), then the low latency mode will automatically get toggled when you use the gaming mode.

The Ear (Stick) last for up to seven hours from the buds themselves with a further 22 hours in the case, giving a total of 29 hours – a little less than the Ear (1)’s 34 hours. With fast charging, you can get two hours of playback from a quick 10-minute charge.

I’d say the battery claims are pretty spot on and you may even get longer depending on your usage, as I often found I got around one hour of listening for 10% of charge. They certainly last longer than many rivals.

Due to the case design there’s no wireless charging like the Ear (1), but this is rare in the budget market anyway – although the Xiaomi Redmi Buds 3 Pro do offer this.

You’ll have to charge the case via the USB-C port on the end and while the supplied cable is very nice – braided and plastic coated – it’s frustratingly short at 25cm.

You can buy them from the official store in over 40 countries including the US – where Nothing doesn’t sell its Phone (1).

In the UK you can buy them from Smartech at Selfridges, O2, Browns Fashion, John Lewis and Farfetch.

Open design rivals such as the Samsung Galaxy Buds Live and Huawei Freebuds 3 are more expensive but you can find other options in our best budget wireless earbuds chart.

It’s slightly tricky to give a solid verdict of whether you should buy a product like the Ear (Stick) or not because the answer largely depends on if they are the kind of earbuds you’re looking for.

What they are definitively not is a replacement for the Ear (1). Instead, they offer a very different style of experience.

For an open design, I’m impressed with how comfortable and secure these earbuds are, along with how good they sound without having to position them in a specific sweet spot.

The case is neat but doesn’t have wireless charging, and you also lack active noise cancelling – which means that if you’re looking for earbuds with booming bass and will be using them on public transport or in a noisy office, then the Ear (Stick) are not for you.

However, if you like the idea of listening for long periods without fatigue and a spacious sound where you can hear things around you to some extent then these might be perfect.