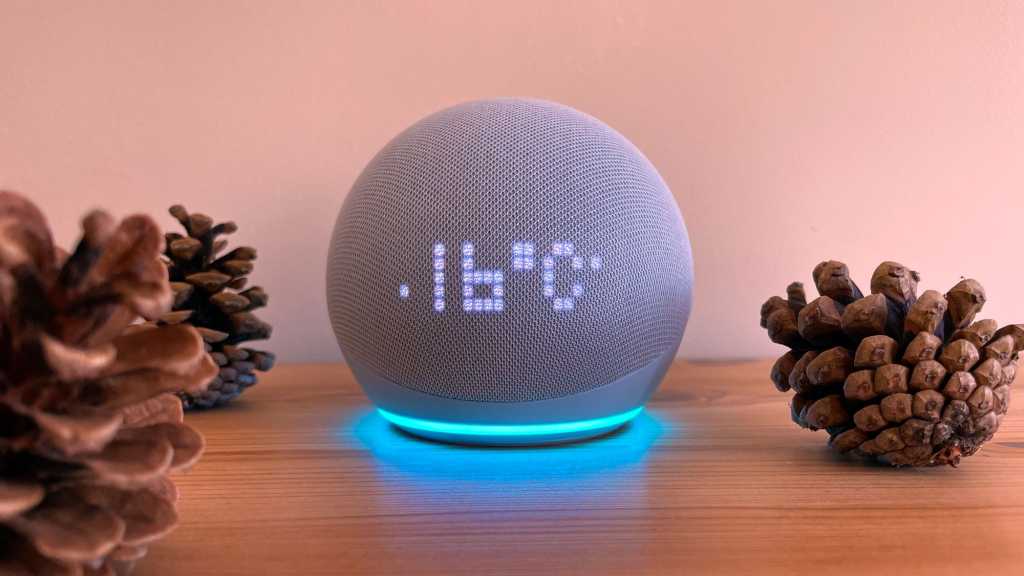 With better sound, more features and the potential to extend your home Wi-Fi, the Echo Dot 5 is the best Dot yet, and the best smart speaker under $50/£55.

Amazon’s range of Alexa speakers is so large it can be tricky to work out which one to buy. The idea, of course, is that you don’t have just one, but fill your home with them so you can listen to music anywhere, ask Alexa stuff wherever you are and control smart home devices – such as lights – in every room.

The Echo Dot, though, has always been a great starting point and allows you to have a hands-free virtual assistant without breaking the bank.

With the 5th-generation model, nothing has changed in that respect, even if it’s a fiver more expensive in the UK this time around.

However, wherever you live, the Echo Dot 5 is likely to be the one to buy thanks to a selection of small but useful upgrades.

That’s unless, of course, you see a previous generation model on sale for a very low price. And since Amazon regularly slashes 50% off its devices in seasonal sales, that’s something worth bearing in mind if you can wait.

Aside from the fact it now comes in new Cloud Blue colour, pictured here, the 5th-gen Echo Dot is exactly the same as its predecessor to look at.

It’s the same size, has the same fabric covering the front and top, the same four buttons and the same light ring around the base.

On the back is a single connector for the power cable and – as with the 4th-gen Dot – there is no 3.5mm minijack.

If you spend an extra $10/£10 on “with clock” model, and I highly recommend that you do, you’ll get a useful dot-matrix display.

With 24 dots horizontally and five vertically, there are 120 in total – considerably more resolution than the seven-segment LED display of the fourth gen, as seen below. (Note, too, the Cloud Blue colour isn’t too bright: it’s more of a grey-blue.)

This allows the new Echo Dot to show a lot more than just the time. Artist and track names scroll as you listen to music, more detailed weather information is shown when you ask for a forecast and units or measurements are displayed when you ask Alexa to do calculations.

Like the 4th-gen Echo Dot with clock, it will also show the volume (out of 10) and the time remaining on a countdown timer.

The display brightness adjusts automatically based on room brightness, but you can set it manually, too.

Note that Cloud Blue is exclusive to the Echo Dot with clock (which also comes in Glacier White). If you opt for the regular Echo Dot 5, there’s a choice of Charcoal, Deep Sea Blue (a much darker blue) and Glacier White.

Whichever model you pick, it will have a temperature sensor built in, just like the fourth-gen Echo. It’s the first time Amazon has put one into a Dot, and it means you can automate smart heating / cooling systems based on room temperature. Plus, you can ask Alexa “what’s the temperature in the dining room” or whichever room you have your Dot in.

Perhaps Amazon intends the Echo Dot to be used in a bedroom, though. Another new feature is a sensor that can detect a tap. This is used to pause and resume music, end calls, snooze alarms and dismiss timers.

Yet another new feature is the Echo Dot 5’s ability to become an Eero range extender. If you have an Eero mesh Wi-Fi system and your Amazon account linked in the Eero app, it should automatically detect your new Echo Dot and use its Wi-Fi to add around 1000 square feet of extra coverage.

That’s nowhere near the coverage you’d get from buying an actual Eero node, nor does it offer amazing speeds (you can expect up to 100Mbps) and can only handle 10 devices, but it’s a great use of the Echo Dot and an extra reason to buy it if you already have Eero.

There’s one limitation: if you do use it as an extender, you can’t also use the Echo Dot 5 as part of a stereo pair. It’s one or the other.

This brings us on to sound quality. Amazon has upgraded the single speaker inside the Echo Dot 5 to a slightly larger one with higher excursion. That simply means the cone can move in and out more, and it leads to better bass among other things.

Overall, you’d probably agree that the Dot 5 sounds pretty good for a small smart speaker. The Dot 5 almost fits in the palm of your hand, so hearing decent-sounding music coming from it with a bit of bass is a commendable achievement.

You won’t notice a huge difference in quality between this and the Echo Dot 4, but there is certainly more bass.

At higher volumes things begin to distort, which is a shame, but at up to around volume 5 or 6 that doesn’t happen and it’s loud enough to fill a reasonably sized room.

There’s more bass still if you opt for an 4th-gen Echo, but that’s double the price. And, naturally, it isn’t a patch on the Echo Studio which is twice the cost again.

It may be a somewhat irrelevant comparison as you’re unlikely to have both Alexa and Google Assistant speakers in your home, but the Echo Dot 5 sounds noticeably better than the similarly priced Nest Mini.

Thanks to built-in Bluetooth, you can use the Echo Dot 5 as a Bluetooth speaker to stream audio from your phone, too.

At the core of every Amazon Echo is Alexa. The voice-controlled assistant is at your beck and call and will do everything from answering general questions and giving you a weather forecast to switching smart lights and plugs on and off.

Alexa can tell you when your local DIY store shuts, remind you of meetings, keep a shopping and to-do list and play music and radio on demand.

The great thing is that Alexa is the same no matter whether you buy an inexpensive Echo Dot or the flagship Echo Studio: there’s no difference in capability.

Using Skills, you can broaden Alexa’s usefulness. In the Alexa app you’ll find a large library of skills including everything from interactive games and ambient sounds that should have wide appeal to very specific things like the UK-based DVLA Vehicle Enquiry that lets you find out when your car tax is due for renewal.

And if you do have various Echo devices dotted around your home, Alexa becomes even more useful. Drop-in, for example, lets you have a quick chat with someone in another room without having to get up and go to them to ask, say, what they want for lunch.

With Announcements, Alexa will broadcast messages to all devices telling the household “Dinner’s ready”, “time to go” or whatever your message is.

Although Matter – the newest smart home standard – is supported, the big benefit of going with Amazon’s smart assistant over Google Assistant or Siri is that Alexa has the biggest third-party support. This means almost every smart home gadget works with Alexa so you can control them with your voice, and you can do this whether you’re at home speaking to the Echo Dot 5, or out and about using the Alexa app on your phone.

This means you can turn lights on and off, open and close blinds (or garage doors and sliding gates), lock doors, arm alarms, adjust thermostats and switch on and off smart plugs.

This means the price is unchanged in the US, but it’s now more expensive for those in the UK  by £5.

Of course, before you pull the trigger on an Echo Dot 5, it’s worth checking for current deals on the Echo Dot 4 and even the third-gen Dot.

Amazon has discontinued the fourth-gen, but you can pick up refurbished models from Amazon for less than half the cost of Dot 5, or pay the same for a brand new third-gen Echo Dot.

And a quick search online shows that other retailers are selling off their stocks of the fourth-gen Echo Dot so, if you’re reading this close to the Echo Dot 5’s launch in October 2022, it’s the ideal time to pick up the older model at a bargain price

However, remember as I said at the beginning that Amazon regularly discounts its hardware and even though it’s new, there’s a chance you can grab the Echo Dot 5 on Black Friday for less than full price.

Finally, there’s a third version of the Echo Dot 5, aimed at kids. Called the Echo Dot Kids, it costs $59.99 / £64.99 and comes in either Own or Dragon designs printed on the fabric. It’s the same hardware as the regular Dot 5, but has a child-friendly version of Alexa and comes with a one-year subscription to Amazon Kids+ which includes interactive games, educational Alexa Skills, Audible books and more. And as with Amazon’s Kids Edition Fire tablets, this model has the same two-year warranty, so it’s well worth the extra cost if you’re buying for a child.

The design may not have changed, but behind the scenes there are a surprising number of improvements and additions that make this the best Echo Dot yet.

The temperature sensor, accelerometer (for the tap functions), improved sound and display are all worth having.

I didn’t mention it earlier, but the Echo Dot 5 uses the same AZ2 chip as the expensive Echo Show 15, meaning Alexa responds quickly and could enable future updates as well.

Plus, the Dot 5 is made from 55% recycled plastics, and 95% recycled fabric. The box it arrives in is make from 99% recycled cardboard, too.

Ultimately, it’s great value whether you buy it in a sale or not. If you’re still undecided about which Echo to buy, then read our guide to the full Echo range.