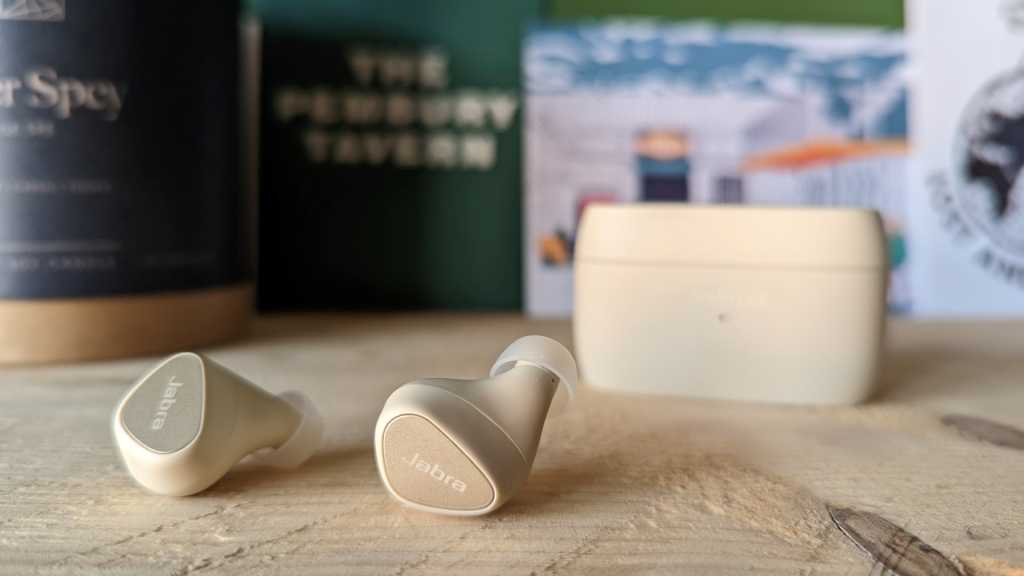 Excellent all-round wireless earbuds for a mid-range price if your budget can’t stretch any further but still want premium features and solid performance.

Jabra has been making great wireless earbuds for longer than many rivals and the firm’s latest pair, the Elite 5, aim to be the ‘mid-range hero’ you’ve been looking for.

This means they come in at a reasonable $149/£149/€149 but offer a feature set normally found on more expensive flagship buds. This includes but is not limited to hybrid ANC, no less than six microphones and wireless charging.

Though they’re pitched at early adopters and hybrid workers, extensive testing reveals they will likely satisfy just about anyone looking for a well-balanced pair of true wireless earbuds.

The Elite 5 is not a departure from Jabra’s usual styling. Far from it, and fans will quickly notice that these buds look almost identical to the Elite 4 Active and Elite 3.

If you’re eagle-eyed, then you might notice the new vent hole but otherwise, it’s more of the same from Jabra in this department.

And that’s no bad thing since the Elite 5 are compact, lightweight (just 5g per earbud) and comfortable. They come in Titanium Black and a new Gold Beige which I’ve tested here.

There’s decent IP55 dust and waterproofing which is more than many rivals for this price so you can take the Elite 5 for a run in the rain without worry.

And if you do, you won’t have the precipitation playing havoc with the touch controls because there are none. Jabra is sticking to its guns on this and continues to offer physical buttons instead.

These are almost invisible, and I must admit, I haven’t reviewed any Jabra earbuds for a while and spent a good few minutes wondering where they were. They are, on this colour, the shiny panel with the Jabra logo.

It’s down to personal preference on whether you prefer buttons or touch but even though I’ve hated buttons in the past due to it ramming the earbud down my ear canal, the Elite 5 buttons work really well without that happening.

You can customise them in the app – more on that later – and the button panels is also where LEDs hide on the earbuds themselves.

There’s not a huge amount to say about the case, which is essentially standard procedure. The magnetic lid flips up, the earbuds are easy to remove or insert, there’s an LED on the front and a USB-C port on the back.

Inside the Elite 5 are relatively small 6mm drivers but don’t read too much into that, it’s really what you do with them that counts. There’s a standard 20Hz-20kHz frequency response matching the theoretical range of human hearing.

In terms of connectivity you get Bluetooth 5.2 here and the codec situation is fairly basic meaning you get Qualcomm aptX for compatible Android devices, AAC on Apple products and SBC on anything else. That’s fine though as I wasn’t expecting anything like Hi-Res Lossless on earbuds this price.

Overall, the Elite 5 offer good audio performance for a range of music genres from rock to electronic pop. That’s testing with the default profile, but you can tailor the sound as and when you like in the app – more on that below.

Granted, more expensive earbuds have a more delicate and nuanced tuning which brings songs to life much better but I’m nitpicking and have the benefit (if you can call it that) of having tested many other pairs.

Most people won’t notice those differences, but you might notice the Elite 5’s more obvious weakness and that’s a lack of velocity. Unusually, I had to crank the earbuds quite high a lot of the time for the audio to be at a normal listening level.

While there was still some headroom left, that’s when things can easily get muddy and distorted.

Sound quality might not quite live up to the earbud’s name, but the Hybrid ANC on offer here certainly does. The hybrid element refers to using both outer and inner mics for feedforward and feedback noise cancelling respectively.

It’s essentially more intricate and clever than just having mics on the outside of the earbuds as is traditional.

The performance isn’t far off earbuds that cost another $50-$100 which is very impressive indeed. With full noise cancelling, I was able to drown out the drone and background noise of things like a flight to Germany, trains and an office environment.

HearThrough allows you to listen to what’s going on around you when needed, although this is not as impressive as the ANC which is surprising considering the six microphones across both earbuds. It’s not bad but I expected it to be better and occasionally experienced an odd crackly noise in the left earbud when using it.

Having so many mics also bodes well for calls as you’ve got two external ones on each bud for clear pick-up and noise cancelling then the internal one will switch on if it’s windy. If you make a lot of calls, the Elite 5 are a solid choice.

In terms of other features, the Elite 5 are rich in them including quick pairing with both Google Fast Pair and Microsoft Swift Pair. Then there’s Bluetooth Multipoint, Spotify Tap, and support for Alexa, Google Assistant and Siri.

Furthermore, there’s wear detection so playback with automatically pause/resume playback when you take an earbud out or put it back in. However, they are much better at pausing than resuming in my experience.

The Jabra Sound+ app – available for iOS and Android – is where you’ll find lots of settings and features for the Elite 5, though you don’t have to use it if you don’t want.

That would be shooting yourself in the foot though as this is a great app, packed with useful things.

As well as the usual overview of what’s going on such as battery life and ANC mode, you’ll want to use the Sound+ app to customise what the buttons do on each earbud as well as things like registering your warranty.

It’s easy to use and allows you to adjust the noise cancelling and HearThrough levels to your liking as well as access a graphic equalizer to tweak the audio profile – or you can choose from various music presets like Bass boost or Energize.

There are also options for things like Find my Jabra in case you lose the buds and lots of settings you can tinker with. I really like that you can switch between the three sound modes from the notification pane on your phone when you’re listening to something.

Battery life is a strong point for the Elite 5 with up to seven hours of life from the buds alone with ANC on. This rises to nine hours with noise cancelling switched off.

When you factor in the charging case, the total figures are rated at 28- or 36 hours with ANC on and off respectively. Sure, a few pairs can go longer but not many and the Elite 5 are last longer than a lot of more expensive earbuds.

Fast charging isn’t anything special though as a 10-minute rest in the case will only get you one hour of playback. Jabra also says fully charging can take up to three hours.

As mentioned earlier, the charging case has a USB-C port for charging as usual but at this price it’s unusual to see wireless charging as well so well done Jabra. The case is compatible with Qi-certified chargers giving you lots of choice.

However, some are closer in cost including the £169 Huawei FreeBuds Pro 2 and you can spend less in the budget bracket without having to lose things like ANC. You can also check our best true wireless earbuds chart for more options.

The Elite 5 are available from the official Jabra store as well as the following retailers:

Jabra has done a solid job with the Elite 5 bringing lots of premium features you don’t normally see to a more affordable price point.

Sound quality, battery life and design are all excellent too so we really do have one of the best mid-range options here if you can’t stretch to something flagship.

You can obviously spend less on earbuds that still have ANC but it’s highly unlikely they will have features like wireless charging, Spotify Tap and wear detection like you get here.