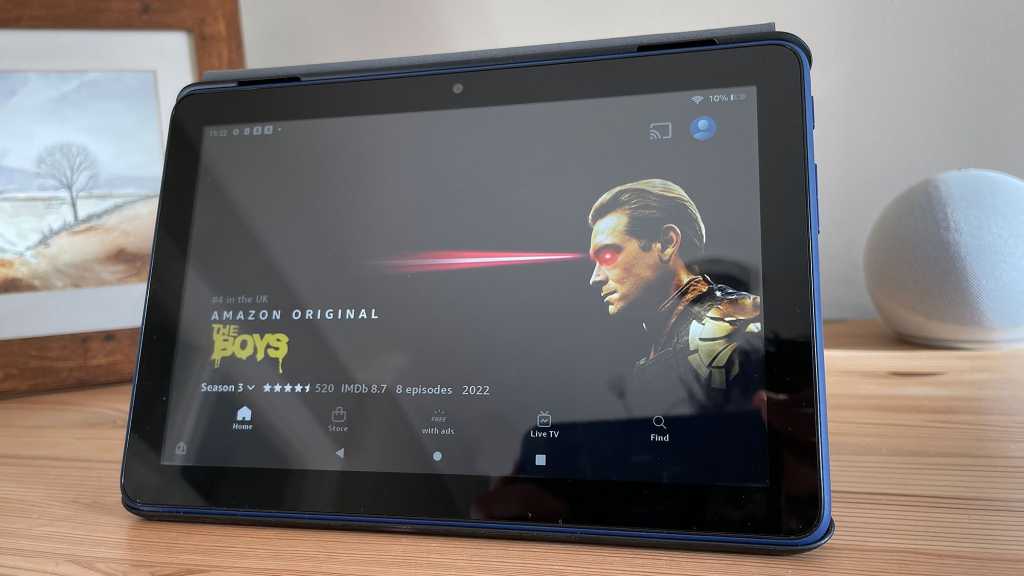 If you’re a Prime subscriber and won’t miss Google apps you might be able to live with the Fire HD 8’s limited selection of apps, mediocre performance and terrible cameras. Most people will be better off with a slightly more expensive Android tablet, but the HD 8 does make for a good kid’s tablet.

Amazon’s Fire HD 8 tablet has, for a long while, been our pick of the range. It sits in the middle between the smaller Fire 7 and bigger Fire HD 10.

This new 2022 model is virtually indistinguishable from the 2020 model, but is now more expensive. Everything is more expensive, yes, but it grates to pay more for a new device with little in the way of real upgrades.

But now, in 2022 with essentially the same limitations, same poor cameras, same screen, slow charging and no perceivable increase in performance, it’s much harder to recommend it.

Amazon calls the 2022 Fire HD 8 “All-new”. But put it side by side with the previous generation and you’ll need a spot-the-difference competition to identify any external changes.

The buttons and USB-C port have been rearranged slightly, but other than that, this is the same tablet with a chunky bezel around the screen and a cheap-feeling plastic frame and back.

There’s a handy headphone jack, ideal for when kids want entertaining on long journeys, and two speakers in the top edge for when you don’t want to use headphones.

They may support Dolby Atmos, but that doesn’t mean they sound good. You won’t want to listen to music on them and they’re only passable for watching videos on Netflix and Amazon Prime Video.

How long you actually get between charges depends on what you use the Fire HD 8 for. Watching downloaded videos is fairly power efficient so should get close to the claim, but playing Roblox or other games will seriously shorten the battery life.

And the bad news is that it takes five whole hours to charge from empty.

As before, Amazon offers a Plus version of the Fire HD 8 which costs $20 / £20 more, but charges in three hours, has more RAM and adds wireless charging too.

Both versions are available with either 32GB or 64GB of storage, and you can still add a microSD card to expand that by up to 1TB extra.

To put that in context, even budget phones have screens with around 400ppi. Yet Amazon has stuck resolutely to the same resolution every year. I wouldn’t call it ‘blocky’ but it’s not as sharp as you might expect from a brand new device, and that’s noticeable when you’re reading pages of text.

I didn’t have the 2020 model to hand for direct comparison, but the screen on the new version looks lower quality.

It isn’t particularly bright, the backlight isn’t very even across the screen and brightness and colours change as you move the tablet in your hands and look at the screen at an angle.

Colours are fine and, overall, it’s acceptable for a budget tablet, but it’s disappointing that there’s no improvement, and possibly even a slight decline in quality.

The key difference is that there are no Google apps or services. No Gmail, YouTube, Maps, Photos, Drive or anything else. And that includes the Google Play store.

To install apps, there’s Amazon’s own Appstore. This has a good selection of popular apps and games, but a far smaller overall choice than the Play store.

As long as you don’t need to do online banking or use specific smart home devices from a Fire tablet, you’ll be ok.

Entertainment is well covered with apps for most of the big-name streaming services in the Appstore.

You can control many smart home gadgets with Alexa on the Fire HD 8, but only if you have another device such as an Android phone or iPhone on which to install the app and connect it to Alexa.

It’s possible to use Amazon’s Silk web browser to watch YouTube and use Gmail and Google Maps, but the experience – compared to having dedicated apps – isn’t nearly as good.

Fire OS is instead designed to make it simple to access Amazon’s services such as Prime Video, Kindle, Amazon Music and – of course – to buy physical products from Amazon.

Unless you pay extra when you buy a Fire HD 8, you’ll see adverts for such products and services on the lock screen, and they change every time you turn on the tablet. If these will bother you, then it’s $10 /£10 extra to not see them.

Fire OS itself is fairly intuitive, with a Home screen containing apps, recently used apps and a Discover section that largely promotes Amazon’s own content.

There’s a For You screen that also has a list of recently used apps along with “Watch next” for Prime Video and suggestions for other apps and games you might want to download.

Swipe down from the top and you’ll find a brightness control, various shortcuts to settings such as Wi-Fi and Bluetooth, plus a toggle switch for Show Mode.

Enabling it turns the Fire HD 8 into an Echo Show, displaying rotating home screens with news, weather, recipes and other things.

With previous Fire tablets, I haven’t run our usual Geekbench and GFXbench tests. There are two reasons for this. First, it used to be awkward to install these apps because they weren’t on the Appstore. Second, the results would have been meaningless to most people looking to buy a cheap tablet.

Both apps are now on the Appstore, but neither would work properly or give any results. Geekbench 5 crashed at the end of each test and didn’t record a score, while GFXbench refused to connect to the back-end servers to download the benchmarks.

This means I can’t say for sure if the extra two processor cores make the HD 8 30% faster as Amazon claims.

What I can say is that this tablet still feels underpowered. Even swiping around the home screens and the notification shade can leave you waiting for the screen to catch up, and apps take longer to load that you’d expect.

The Silk browser ground to a halt every time I  tied to go to any complex web pages, such as Google Photos. It crashed a good few times and quit back to the home screen, too. A less than ideal experience if you’re trying to use Google services.

Show Mode works ok, although it isn’t as responsive as a real Echo Show. If you have other Echo devices, you’ll probably find they answer first before the Fire HD 8 has got its act together.

Cameras are the same 2Mp ones found in the Fire 7 and many Fire tablets over the last few years. It’s hard to overstate how bad they are. The rear one captures smeary photos and jerky video, while the front one is adequate for video calls, but not selfies.

The bottom line is that this is still a cheap tablet and has accordingly entry-level performance.

If you think 32GB isn’t going to be enough storage for apps, games and downloading videos to watch, the 64GB model is an extra $30/£30.

Opt for the Fire HD 8 Plus and you get an extra 1GB of RAM (which makes almost no difference) and wireless charging. That’s $20/£20 extra.

You can buy the Fire HD 8 from Amazon, naturally, but soon you’ll also be able to buy it from other retailers. At the time of this review, on the tablet’s release date, it was only available from Amazon.

There’s a choice of black, denim (blue) and rose (pink).

Amazon also sells the Fire HD 8 in two different kids versions. One is called the Kids and is aimed at ages 3-7, and the other is the Kids Pro aimed at 6-12s.

Both cost $149.99/£149.99 and comes with a protective case. The Kids model has a chunky bumper case that is easy to hold and offers excellent protection.

For older kids, the Pro has a slimmer case in a selection of more grown up designs, and a more grown-up interface too.

Both include a year’s subscription to Amazon Kids+ which includes a variety of age-appropriate content including games, e-books, audible books, videos and more, all of which are ad-free.

As ever, they come with a two-year warranty that covers accidental damage. The regular Fire HD 8 (and Plus) has a single year of warranty that does not cover damage.

It is worth noting that the regular models include the Amazon Kids app, which allows you to lock down the tablet at certain times, choose what content your kids can use and prevents them using the unfiltered internet.

You won’t find a great budget tablet for much under $200/£200, but you’ll find some recommendations in our roundup of the best budget tablets.

Fire tablets may be cheap, but the new HD 8 – especially if you go for the extra storage and choose the ad-free model – is getting quite expensive.

You might be happy to accept the limitations of the Appstore and not having any Google services, but it’s worth knowing you can buy a similar-spec Android tablet for almost the same money. Samsung’s Galaxy Tab A7 Lite is available from Amazon.com for just $109, and in the UK for under £120 from various retailers including Argos.

It offers similar performance and build quality, but will at least have all the usual Google apps, including the Play store.

There are loads of un-branded (or no-name) Android tablets to be found on Amazon for even less than this, too.

I’m sure market forces have dictated Amazon can no longer sell Fire tablets as cheaply as it once did, but with almost no improvements to be seen over the past few years (unless you count the USB-C port) this 2022 Fire HD 8 does not represent the great value it once did.