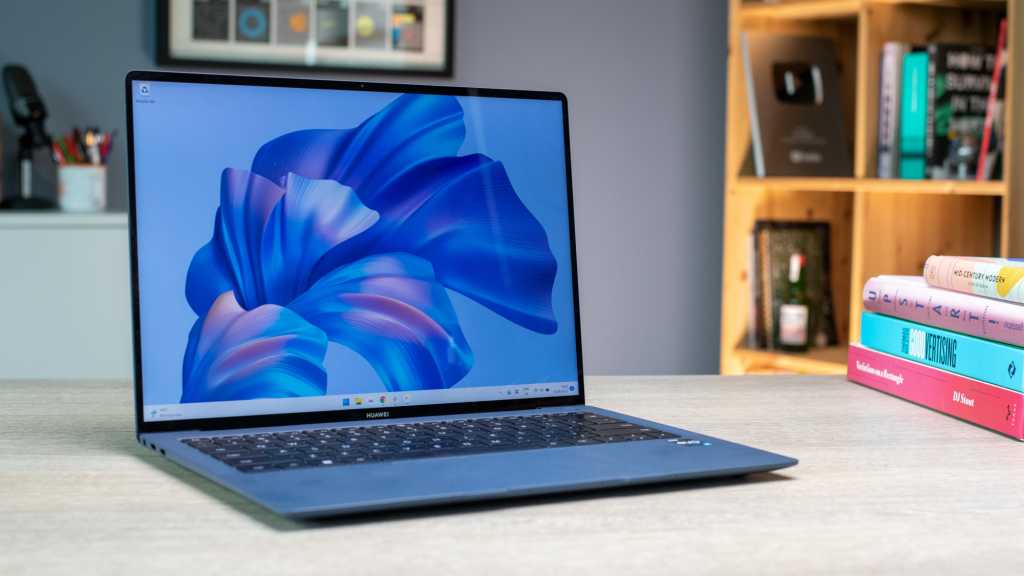 The MateBook X Pro’s second 2022 revision doesn’t change much, but a jump to 12th-gen Intel chips and a lighter magnesium alloy build are enough to make a great laptop even better. It’s not quite perfect – we still miss the proper USB port, and rivals have better battery – but it’s pretty darn close.

Huawei has already updated its flagship MateBook X Pro once for 2022, but it’s back again with a second refresh to include more powerful 12th-gen Intel chips along with a new, lighter design.

Not much else has changed, but since the last generation earned 4.5 stars and a coveted Editor’s Choice Award from us just six months ago, a lighter and faster version sounds like no bad thing.

In terms of its dimensions and details, Huawei hasn’t changed the MateBook X Pro at all since its last iteration. This is still a slim, sleek laptop with an expansive trackpad, thin bezel around the display, and premium design.

It once again features four USB-C ports and a 3.5mm headphone jack, with no sign of USB-A, HDMI, or an SD card slot – good for minimalists, a bit annoying for those of us with peripherals and dongles to carry around.

There have been changes though. For one there’s the colour: the previous excellent Emerald Green has sadly been retired, but I’m almost as big a fan of the deep Ink Blue this time around. That’s the only colour on offer in the UK, though you’ll find White and Space Grey models elsewhere.

There’s also the finish. While the grey version uses the same aluminium alloy as before, the blue and white models are made from a lighter magnesium alloy, dropping the laptop’s weight from 1.38kg down to 1.26kg.

That new alloy is then finished with a “micro-arc oxidation coating.” I couldn’t possibly tell you what that means, but the end result is a smooth, matt finish that doesn’t feel like metal. Instead it’s almost soft and satin-y to the touch. I’m a fan, but suspect it could be divisive – you may find it feels too similar to plastic to fit the bill on a laptop at this premium price.

Huawei has pretty much always delivered excellent keyboards in its laptops, and this is no exception. Spanning almost from edge to edge, this is a full-scale board with a really comfortable, responsive typing action and a two-stage backlight option.

The trackpad is just as impressive, but certainly more interesting. For one thing, it’s big, expanding all the way to the bottom edge of the laptop. That gives you plenty of room to scroll, and looks sharp too.

As is the vogue these days, this is a haptic trackpad, which Huawei has used to enable a variety of new shortcuts complete with vibrational feedback. You can swipe up and down either edge to adjust volume or display brightness, double-tap with your knuckles to take screenshots or screen record, and press into the corners to minimize or close your windows.

This is all stuff you can do elsewhere of course, mostly including with keyboard shortcuts, but it’s always handy to have extra options, especially with the welcome haptic buzz the trackpad provides for feedback. You can turn each of them off individually too, in case there are any you find yourself triggering by mistake.

Finally, the webcam is a simple 720p number sitting in the top bezel above the display. Huawei has long since moved on from secret webcams hidden under fake keys, and this more traditional webcam is certainly in a superior position. Quality is fine, but nothing to get excited about – it’s good enough for Zoom though.

You get one extra button beyond the keyboard: a power button in the top-right, which also doubles as a fingerprint reader. The webcam includes IR tech for Windows Hello facial recognition as well, giving you a couple of biometric options.

Don’t hold that against the MateBook X Pro though – this is an excellent display panel, and better than many OLEDs. You can expect impressive viewing angles, a rich 3K resolution, and solid contrast – and it’s a touchscreen too.

Colour range remains great when measured with our using a Spyder X colorimeter, with 100% sRGB coverage backed up by 97% DCI-P3 and 88% AdobeRGB, which should be enough to satisfy anyone except the fussiest of professional colour graders.

You also get a couple more unusual benefits. One is support for a faster 90Hz refresh rate – great for gaming, and for smooth, fluid animations the rest of time. It’s not as big an advantage on a laptop as it often is on smartphones or gaming monitors connected to high-end desktops, but it’s a welcome perk.

There’s also the boxy, squared off 3:2 aspect ratio. This nets you some extra vertical screen real estate, perfect for productivity – albeit not so well suited for Netflix and the like.

At least when you’re streaming your shows you’ll get powerful speakers. The six speakers on board here are crisp, clear, and can even deliver a bit of bass. Throw in four microphones and you’ve got a fairly potent setup for calls even without a headset too.

The global release of the MateBook X Pro comes in a single setup, which at least keeps things simple. You’ll get an Intel Core i7 processor, 16GB of RAM, and a generous 1TB of storage.

The processor is the 12th-gen Core i7-1260P – chipset enthusiasts may notice the new ‘P’ suffix, intended to mark chips that sit somewhere between the enthusiast level H-series and the efficiency-focussed U-series. Essentially, it means this is meant to be a Goldilocks chip, delivering power while still squeezing into compact form factors.

Together with the impressive RAM and storage allocations, you get plenty of power for productivity on the go. I’ve used the MateBook X Pro for web-based work, video calls, and light image editing in Photoshop and Lightroom, usually with several apps and an array of Chrome tabs running simultaneously, without hitting trouble.

Benchmarks are solid, though curiously this lags behind its predecessor – perhaps down to the fact that this year’s chip runs at a slightly lower wattage than the 11th-gen version. Still, performance is impressive by any measure, broadly keeping pace with other top-tier devices.

The lack of a discrete GPU may bottleneck the X Pro when it comes to certain use cases like serious video editing, but short of that there’s plenty of performance on offer here. Intel’s Xe graphics are also much better than they used to be, so this will hold its own in a pinch.

The lack of GPU is also offset a little by the fact that two of the four USB-C ports support Thunderbolt 4, giving you the option of running an eGPU if necessary. Wireless connectivity includes Wi-Fi 6E and Bluetooth 5.2, so that’s top notch too.

Huawei’s high-end laptops haven’t always delivered the good when it comes to battery life, but for the most part the X Pro 2022 has held up okay.

There’s enough power here to last a full day of light work, though it won’t go much beyond that. The 11 hours it lasted in our non-stop video playback battery test falls a little short of the competition though, so this remains one area where you probably can find longer life elsewhere, though Huawei’s offering is just about good enough.

What helps is that Huawei leads the way in charging. The X Pro ships with a 90W USB-C charger (good for your phone, too) which was powerful enough to restore 57% of the laptop’s battery in just 30 minutes during my testing – an exceptional result for a laptop.

Even better, Huawei has enabled charging on all four of the laptop’s USB-C ports, so it doesn’t matter what else you’ve got plugged in or which side of you the power socket is.

The MateBook X Pro ships with Windows 11 as standard. And in case you’re worrying that, like Huawei’s phones, this may be compromised in some way, don’t be: this is the full, regular Windows 11 experience with no limits. It even runs Google software.

It actually comes with a little extra besides. Huawei, like every major tech company in 2022, is bullish about its hardware ecosystem. With that in mind, its laptops are designed to work smoothly with other bits of Huawei kit.

That means you can wireless connect to a Huawei monitor, seamlessly share files from a Huawei tablet, or even remotely control a Huawei phone within a window on the computer screen.

How useful all that is obviously depends on whether you own other Huawei kit – or think you might in the future. While the company’s phones are currently limited, without 5G or Google software support, Huawei tablets, wearables, and monitors are mostly excellent, so it’s at least something you should keep in mind.

The MateBook X Pro is available now in the UK, Europe, and select other markets.

That’s certainly a premium price, but this is a premium product. It costs less than any comparably specced MacBook (Air or Pro), and about the same as a Dell XPS 13 Plus kitted out the same way. You can’t say much fairer than that.

For more options, make sure to check out our ranking of the best laptops around right now.

The MateBook X Pro has always been a great piece of kit, and this late 2022 update is no different.

Huawei hasn’t messed with the formula too much, but the new, lighter magnesium alloy is certainly a welcome addition, and I’m a fan of the soft touch finish even if I suspect not everyone will be.

The extra power afforded by the 12th-gen Intel chips helps keep this competitive, and the rest of the package is as good as it’s ever been: sleek, simple, and a real pleasure to use. We just miss the USB-A ports.

If you can afford to spend this much on your next laptop, the MateBook X Pro is one of very few models you should be seriously considering.